What manner of distance. . . 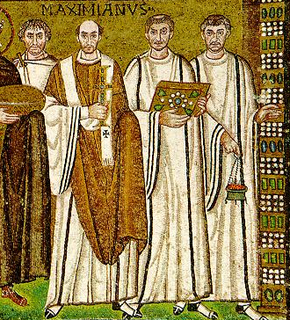 One of the things I find most intriguing is the issue of distance when it comes to any discussion of the office of deacon.  Some, whether or not they favor opening the office to woman, distance the work of the deacon from that of priest/presbyter/pastor and bishop.  There is a common desire to de-clericalize the office of deacon, even to see the clericalization of that office as part of its corruption and loss.  It is the mythology of the modern mind that the Church is an egalitarian organization without offices, or at least without those who exercise any kind of authority over other offices.  Part of this mythology is the understanding of service which sees the Church as a philanthropic organization and its ministry or service to the world as care for the least and the lost.  The whole gift of the Gospel is this freedom for ministry and from the domain of cultus that is inwardly focused.  We see this today among churches, even liturgical churches with an ordered ministry, who are abandoning the liturgical service once a month or every fifth Sunday in order to serve the world in Jesus' name by working with food distribution agencies or fixing up broken down real estate or the like.  This equation of service to the poor and needy with the liturgical service, perhaps even the elevation of this diaconia above cultus, is precisely the issue.  Deacons are often seen as the purest expression of this service or mercy work since they are largely unencumbered by a primarily cultic focus.  Theirs, some wax poetically, is pure charity and love, without the self-serving aspect of worship and the internal focus upon the baptized.

This has had profound effect upon the understanding of the Church as a whole, not merely upon one office, such as deacon.  The purest work of the Church is the work of love which leaves behind the nave and chancel to plant God's temple among the poor, the needy, the oppressed, and the marginalized.  This social gospel has become so deeply entrenched that we almost feel guilty about stealing the time and attention of God's people for the Divine Service, for Bible study and catechesis, and for the care of God's house (building not people).  Such an office as deacon has as its focus not the baptized or the ritual and liturgy of worship but real service to those with real and tangible needs.  Since this does not compete with nor does this service have much even to do with worship, the office is open to males and females.  The more distance this office and its work is from Sunday morning, the fewer restrictions to those who can serve in this office.

The problem is that this is more myth than fact.  Dieter Georgi has asserted that the New Testament term diakonia "almost never  involves an act of charity."  (The Opponents of Paul in Second Corinthians (Philadelphia:  Fortress Press, 1986)  John N. Collins went so far as to suggest that in the early Christian use of diakonia and its word-group, "the preaching of the Word has no place in the history of  the diaconate as preserved in  the earliest docrnents.”  Collins takes earlier scholariship to task insisting this and calls for a rejection of "the mistaken understanding that the apostolic diaconate was essentially for works of mercy."

On the one hand, there are those who are in favor of the diaconate (whether all male or male and female) because it is distant from the largely cultic focus of the priestly and episcopal offices.  These are those who remove the comma in Ephesians 4:11-12, "equipping the saints for the work of ministry..." and who see the diaconal service as pure mercy, what the ordained should be preparing the people for, their service shaped vocation to the world.  On the other hand, there are those who speak of the diaconate not as distant or unrelated to the priestly and episcopal ministry but as very near, as Hippolytus put it "the eyes and ears of the bishop."  These folks keep the comma in Ephesians 4:11-12, "equipping the saints, for the work of ministry..."  Again, Collins, those "who find this scheme makes for an inadequate or too passive life for 'saints' in the church are underestimating the role attributed by the author to sound doctrine; it assimilates the whole church into the mystery where growth into the fulness of Christ occurs.  No one is left out. No one has more experience of
the mystery than anyone else."

Some would see the three fold pattern of ministry largely as a distinction of functions.  In this distinct function, bishops teach, supervise, and oversee, priests focus upon the liturgy, and deacons manifest the grace of God to the world.  It sounds all neat and tidy but it is not as neat and tidy as it seems.  Collins and others like him would insist that it is not merely functions which are assigned but the offices support one role and one focus -- deacons are not social workers nor priests merely cultic figures but in all Christ dispensing His work through His agents.  In this way, the Lutheran confession of Augustana V has it exactly correct:  "To obtain such faith God instituted the office of the ministry of teaching the Gospel and administering the sacraments."  The office is one, the Predigtamt, in which the connection between faith and the means of grace is central and the one ministry established by God serves the purpose of God in delivering the Word of God to the people that thereby the Spirit may work faith in them and they may be saved.  Far from distancing deacon and priest and bishop, this brings them very close together, indeed.
Posted by Pastor Peters at 6:00 AM

However you want to classify teachers and DCEs from a biblical perspective, they are often treated as second-class citizens, and that is not right.

Understanding how the Evangelical church at Leipzig was organized at the time of Bach (1723-1750) is instructive. Walther was a student at the University of Leipzig early in the 19th Century, and he used parish organizing ideas in St. Louis that are similar to what he experienced at Leipzig. Leipzig had 2 parishes (2 hauptkirche), and each hauptkirche had several churches assigned to it's parish.

Clerical order: From the top, The Superindendent. Leipzig had never been a city with a bishop, but the Lutherans made the Dean of the Evangelical Theology faculty at the University to also hold the office of the city Superindendent.
https://en.wikipedia.org/wiki/Superintendent_(ecclesiastical)

The Predigt Amt (Prediger/preacher): One at each hauptkirche, ranking clergy in the parish, usually an older man. He preached the Sunday Hauptgottesdienst sermon.

The Deacons (Archdeacon-Deacon-Subdeacon): The Deacons were ordained clergy, graduates of the Evangelical Theology Faculty. They served at the altar of the hauptchurches (celebrants, chanters, liturgists) at the Hauptservice on Sunday morning. They heard confessions and absolved their Beichtkinder (Bach's Beichtvater was always a Deacon). They were assigned to provide sermons and liturgical celebration at the associated parish churches (St. Thomas headchurch was responsible for the much smaller churches of St. Peter, St. Matthew (New Church), etc. They might even be sent out to the rural churches when necessary. (Bach was musical director for both parishes and the city itself. He had four choirs at the Thomas school that were constantly running from church to church.)

This doesn't line up well with what we read about deacons in the early church, and it is not like the way the LCMS currently uses a female only diaconate. Still, it's always helpful to know how people employed/established clerical offices.

My primary source is Stiller's "Liturgical Life in Leipzig."