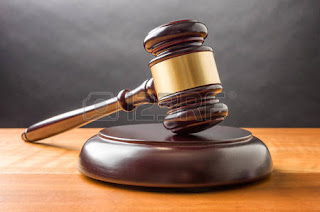 Here is the summary of the issue at stake before the Supreme Court:


"The Trinity Lutheran Church Child Learning Center is a Missouri pre- school and daycare center. Originally established as a nonprofit organization, the Center later merged with Trinity Lutheran Church and now operates under its auspices on church property. Among the facilities at the Center is a playground, which has a coarse pea gravel surface beneath much of the play equipment. In 2012, the Center sought to replace a large portion of the pea gravel with a pour-in-place rubber surface by participating in Missouri’s Scrap Tire Program. The program, run by the State’s Department of Natural Resources, offers reimbursement grants to qualifying nonprofit organizations that install playground surfaces made from recycled tires. The Department had a strict and express policy of denying grants to any applicant owned or controlled by a church, sect, or other religious entity. Pursuant to that policy, the Department denied the Center’s application. In a letter rejecting that application, the Department explained that under Article I, Section 7 of the Missouri Constitution, the Department could not provide financial assistance directly to a church. The Department ultimately awarded 14 grants as part of the 2012 program. Although the Center ranked fifth out of the 44 applicants, it did not receive a grant because it is a church."


Seven justices supported the result in this case. Justice Sotomayor, joined by Justice Ginsburg, dissented.  Justice Breyer supported the result, but did not join the Court's opinion.  The Chief Justice wrote the Court's opinion, joined by Justices Kennedy, Alito, and Kagan.    “The exclusion of Trinity Lutheran from a public benefit for which it is otherwise qualified, solely because it is a church, is odious to our Constitution all the same, and cannot stand,” Chief Justice Roberts wrote. Justices Thomas and Gorsuch joined except for Footnote 3.  Here's the entire footnote:


"3 This case involves express discrimination based on religious identity with respect to playground resurfacing. We do not address religious uses of funding or other forms of discrimination."

In a concurring opinion joined by Justice Thomas, Justice Gorsuch writes that Footnote 3 "leaves open the possibility a useful distinction might be drawn between laws that discriminate on the basis of religious status and religious use."  Gorsuch "doubts" the "stability" of such a distinction:


"Does a religious man say grace before dinner? Or does a man begin his meal in a religious manner? Is it a religious group that built the playground? Or did a group build the playground so it might be used to advance a religious mission? The distinction blurs in much the same way the line between acts and omissions can blur when stared at too long, leaving us to ask (for example) whether the man who drowns by awaiting the incoming tide does so by act (coming upon the sea) or omission (allowing the sea to come upon him). See Cruzan v. Director, Mo. Dept. of Health, 497 U. S. 261, 296 (1990) (Scalia, J., dissenting). Often enough the same facts can be described both ways."

Gorsuch believes that the distinction is irrelevant and that Constitutional protection applies in either case.  In some respects, Justice Sotomayor begins her opinion at the same place as Justice Gorsuch begins his.  The distinction between religious status and religious use is not meaningful.  But for her, this leads in the opposite direction:


"The Court today dismantles a core protection for religious freedom provided in these Clauses. It holds not just that a government may support houses of worship with taxpayer funds, but that—at least in this case and per- haps in others, see ante at 14, n. 3—it must do so whenever it decides to create a funding program. History shows that the Religion Clauses separate the public treasury from religious coffers as one measure to secure the kind of freedom of conscience that benefits both religion and government. If this separation means anything, it means that the government cannot, or at the very least need not, tax its citizens and turn that money over to houses of worship. The Court today blinds itself to the outcome this history requires and leads us instead to a place where separation of church and state is a constitutional slogan, not a constitutional commitment. I dissent."

"Trinity Lutheran is not claiming any entitlement to a subsidy. It instead asserts a right to participate in a government benefit program without having to disavow its religious character. … The express discrimination against religious exercise here is not the denial of a grant, but rather the refusal to allow the Church—solely because it is a church—to compete with secular organizations for a grant."

"The Court today reaffirms that 'denying a generally available benefit solely on account of religious identity imposes a penalty on the free exercise of religion that can be justified,' if at all, 'only by a state interest 'of the highest order.'"

The grant from the Playground Scrap Tire Surface Material Grant Project was for reimbursing the cost of scrap tire surface material installed on the playground of Trinity Lutheran Child Learning Center, where (especially young) members of the general public might fall down. The application for receiving such a grant required various kinds of information including a description of the need for having a playground surface covering such as scrap tire material. In the case of the State-licensed Trinity Lutheran Child Learning Center, and other daycare centers, that need is specified in the State of Missouri's Code of State Regulations, 19 CSR 30-62.082 (6)(A).

There is nothing in the State regulation about what a child, playing on the playground of a licensed daycare center, was saying, singing, learning, or being taught before, during or after falling down on the playground's scrap tire surface material.

But I'll be on the alert, just in case.