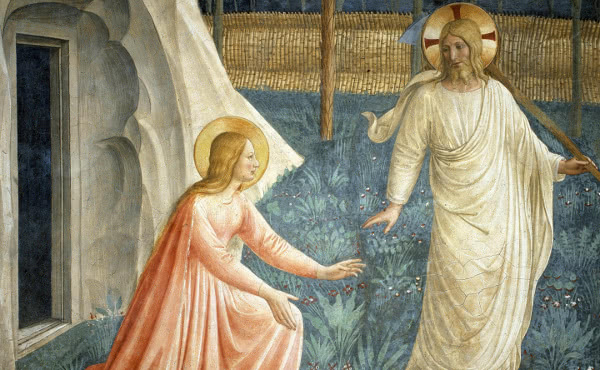 According to Luke’s Gospel, Mary was among those who follow Nicodemus and Joseph of Arimathea when they took down Jesus’ body and hastily laid it into an unused grave.  It follows.  She was among the women who had followed Jesus from the beginning.  When all the disciples scattered and ran, Mary was their with the Blessed Virgin, before the cross.  She watched at the blood dropped upon the ground and she heard the last gasp of Jesus, “It is finished. Father, into your hands I commit my spirit.”  She was there when the enemies of Jesus had insisted upon a guard and a stone to seal the tomb.  All that night she tossed and turned.  She had prepared the spices and ointment for the body of Jesus, to finish the burial and do as any loving family would do for the dead whom they loved.  But it was a Sabbath day and so the Law allowed nothing be the sacred rest of worship.

Then early in the morning, while it was still dark, she gathered her things and headed to the garden of the tomb.  All the while she wondered who would roll the stone away and what would she say to the guards.  But when she arrived, they were gone and the grave was left open – open enough to see that it was empty.  She ran immediately to get Simon Peter and John.  They ran and Peter led them into the cave.  But they did not see Jesus.  They saw the linen that had wrapped His body and they saw the cloth that had wrapped His head.  But they did not see Jesus.  Peter was not ready to believe.  John tells us that he believed, hope against hope, that Christ was risen.  Yet John records their minds were too clouded with the terrible events of Good Friday and their hearts numb with grief to recall that Jesus has promised He would rise.  They went back to their homes.

Not Mary.  She could not go back home.  Her eyes filled with tears and as much as she wanted to look away, she could not be stare with shock into the tomb.  And then she saw.  There were two men in white, angels as the Scriptures tell us, but they appeared as men to Mary.  They were sitting where Jesus’ body had lain.  “Why do you weep?”  What a stupid question.  She was in the garden of the dead, carrying spices and ointment for a body.  Why do you think she wept?  But she explained.  “My Lord they have taken away.”  Jesus was right behind her but she could not see through her grief and pain.  Again, “Why do you weep?”

How many times must she explain herself!  My Lord is gone; where have you taken him.  And then the voice.  The unmistakable voice.  “Mary!”  Could it be?  She addressed Him as Rabbi and in a moment He was gone and she went as He told her to announce to the disciples that she had seen the Lord.

It is an amazing story.  Yet it is one we repeat over and over again.  Though we have the benefit of hind sight and see it all more clearly, we are just as shocked as Mary by the whole thing.  We still come to graves with tears of sorrow and hearts weighed down by grief.  We still sit numbed by the death of those whom we love struggling to recall what Jesus said.

To the world we are all fools.  We stand at the cemetery and confess in the Creed that we believe in the resurrection of the body and the life everlasting.  But before us is a coffin and we are lowering it into the ground.  The only eyes that could possible see anything different are the eyes of faith.  We say “O death, where is your sting?  O grave, where is your victory?  But we look like idiots to a world which insists death has won and life is over.  Maybe you can hope for some ghostly spiritual existence but life as we know it is no more.  Yet there we are, like Mary Magdalene, trying to see life in the midst of death, hearing the voice of Jesus who spoke the names of our loved ones in baptism just as suredly as we now speak their names “ashes to ashes, dust to dust.”

Where Mary was, we all are.  We want to cling to yesterday, to prolong a moment of life that is passing away, content with a few more minutes or an hour or a day or a week or a year. We see death so clearly but have trouble visualizing eternity.  We are so numbed by death that the Word of God is like a foreign language in our eyes and its hope like a stranger to our aching hearts.  Jesus is not dead.  Because He lives, we shall live also.  That is why Easter is so important.  It is not simply about Jesus who triumphs over death but our own triumph over death, our own hope and expectation of everlasting life, and our own hope and confidence that in our flesh we shall see God.

Our Lord died for our sins and rose for our justification.  Those who wear His name by baptism and who confess their faith in the creed shall not die but will live.  We refuse to be contented by memories.  We expect a future, a tomorrow, a new flesh and a new blood, a new heaven and a new earth.  Jesus has said it and promised it.  We go to the graves of our loved ones and we go to our own graves in sure and certain hope of the resurrection of the dead and the life everlasting.

We may be sad for ourselves.  We are not yet where the dead have gone.  We are still here in the realm of sin and death, grief and pain.  We will go back to the cemeteries again and we will bury more and more people along the way before those who love us will stand to watch our caskets be lowered into the earth.  But we refuse to slink away in sorrow or in shame.  Because Christ is risen, we too shall rise.  Because He lives, we shall live also.  We may not be able to predict tomorrow but we know the outcome of our lives.  When our Lord stands upon the earth, we shall stand with Him as the risen who have conquered by His blood. What death tried to steal, Jesus has co-opted.  Death is no longer the end and the grave no longer the finish.  Death is the gate and the grave the door through which we pass with Christ to our own joyful resurrection.

This is what we say to each other.  Christ is risen!  We say it because hidden in those words is our own resurrection.  We have seen the Lord even in death.  His victory is our own victory.  His triumph is our triumph.  His future is prepared for us so that we have a future.  We proclaim this with confidence right here in the midst of a world where death is still at work.  Christ gets the last word.  Not the devil or the skeptics of this day.  Christ.

And the last word is this.  Christ is risen!  In Him we too shall rise.  Go to the world with this news.  Tell everyone who will hear, Christ is risen.  God is still our God and we are still the people of His pasture.  Death did not steal from Christ what He was not ready to surrender – but only for a moment, for three days, and then we see Him, as He is, and as we shall be.

Christ is Risen!
Posted by Pastor Peters at 7:36 AM