While some have tried to paint the so-called Benedict Option as a retreat, an exile away from engaging the world, others, including its famous author, Rob Dreher, have insisted it is a radical form of engagement in which the Church refuses to cower against the enemies of the faith.  Why all the fuss?  Consider this. . . 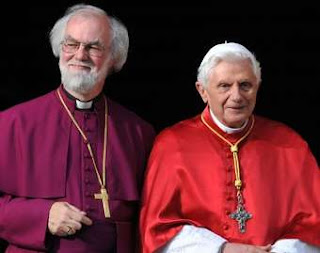 In a startling development, the former Archbishop of Canterbury, the titular head of the Anglican Communion, partnered with noted atheist Richard Dawkins to register opposition to a change in governmental policy that would allow the Roman Catholic Church in Great Britain to open new schools.  Dr Rowan Williams co-signed a letter to the editor sent to the Daily Telegraph, in which he said it was “difficult to bring to mind a more divisive policy, or more deleterious to social cohesion” than removing an admissions cap that prevents new faith schools from selecting more than half of their intake from their own religion.  The government's cap prohibits the student body of a religious school from having more than 50% of students from its own religion.  This has proven to be an effective tool preventing the Roman Catholic Church there from opening new schools.  Once those schools reach the 50 per cent limit, they are forced to turn away Roman Catholic students -- something that violates canon law.

The point is this: the world is not about to let bygones be bygones.  The world is not about to let religious ascendancy go without challenge and will use every governmental means to prevent this.  What is remarkable is that here the former leader of the Anglican Communion and the presiding bishop of the Church of England has sided against such religious schools.  In effect, Rowan Williams has spoken out in favor of measures preventing any change in the status quo.  It is the faith against the faith, unless you believe Rowan Williams has abandoned all sense of Christian identity.

The point of the Benedict Option is that accommodation cannot be faithful to God and there is no place to hide.  The call today is to unite in the fervent cause of faithful Christian witness and life -- especially because the opposition is working overtime to force such accommodation.  It is not a matter of retreat but regrouping, not a matter of hiding but of being faithful, and not a matter of toleration but of living with those intolerant to the Christian faith.  When the structures of Western Civilization decline to the point where their Christian roots are rejected and even abhorred, then is when Christians must show their true character and resist.  It has happened on the continent, is making its way through Britain, and has already arrived at our saltwater shores.  What will we do in response?
Posted by Pastor Peters at 6:00 AM

The next (third) time the United Kingdom asks the U.S. to save their keister from disaster, the President should send flowers and a sympathy card instead.

"When the structures of Western Civilization decline to the point where their Christian roots are rejected and even abhorred, then is when Christians must show their true character and resist."

Just as long as Lutheran pastors are not required to lead their congregations in imprecatory prayers during worship services.

Rowan Williams is no Christian; he is a Druid. He was a false shepherd while in the position of Abp of Canterbury, and I greatly doubt he has changed for the better today.

For any who may not be aware, the position of Abp. of Canterbury is essentially a political appointment made by a committee from Parliament. It requires the "royal ascent" but Elizabeth II has long since give up any sense of leadership of the CoE; she is simply a rubber stamp. With that sort of route to the position, why should anyone be surprised when a heretic is appointed?

Great article. Thanks for sharing.