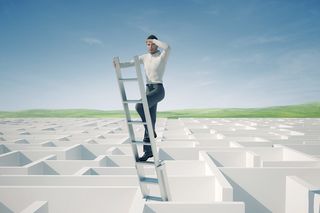 Watching Rome and the great debate over paradigm shifts and Amoris Laetitia, I was struck by a comment:  The complaint is that too often the Church has spoken of Marriage in terms of an "ideal". [Amoris Laetitia] then goes on to do precisely that by dismissing Marriage as a sacramental and canonical state which objectively either exists or does not exist, and then proceeds to treat it as a virtually unattainable "ideal" to which one may approach or approximate via gradual increments.  What may be going on in Rome is certainly the grand temptation of all Christians.  'Do what you can shall be the whole of the law' (as one person put it).


If that is all it is, an unattainable ideal, then all the various states of marriage and family must be accepted as simply the the best people can do.  Is that not, in the end, what God does?  At least that is the attitude of those who believe in some measure of gradualism.  In a sense, this is what is happening all over Christendom.  Marriage is an unattainable goal so it is, at best, an ideal not to be realized except imperfectly.  Same sex marriage is not the goal but it is better than a promiscuous sexual behavior, for example.  It is all relative as long as traditional marriage is but an ideal.

Chastity is a goal but if it cannot be realized, then at least the unchaste should be responsible and safe (referring to contraception).  Male and female may be an ideal but they are certainly not the only shapes or forms of relationship.  It is as if everyone agrees that gender is a spectrum, marriage is a generic form, and that each person works within the relative confines of their own reality to define and live out as best they are able.  In the end, can God really expect more from us?

In spite of Amoris Laetitia and the churches that have caved before the move of culture and law, the answer is yes.  God does expect more from us.  If our best effort were good enough, then Christ would not be necessary.  No one disputes that God meets us where we are but the real question is does he leave us there.
Posted by Pastor Peters at 6:00 AM