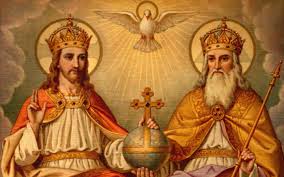 So. . . let me get this straight.  Christians, concerned about offending Muslims or being condemned by them to hell are being asked to simply abolish the Trinity?  Uh, yeah.  That is exactly the right move!  The future of the Church of England lies with acceptance from Islam?  Surely this will flummox even the seemingly unflappable Queen who is, at least officially, that church's head.  Regardless of what the CofE does, it is scandalous that this even is allowed a hearing.  That a Christian Church must defend its most core creedal confessions against such foolishness is more of an indictment of the state of the Church of England than the actual outcome of the vote. . .


In a highly controversial proposal, the Church of England’s General Synod is set to debate the abolition of the doctrine of the Holy Trinity as the first step towards being ‘intentionally inclusive’ of Muslims and moving towards healing and reconciling the centuries old divide between Islam and Christianity.

The Church of England’s highest legislative body is due to meet at the University of York from July 7 to 10, 2018. Papers circulated to members of General Synod ahead of its sessions in York have been published online in two batches.

One briefing paper in the first circulation sets out how an existing Church of England service for reaffirming baptismal vows may form the liturgical basis for services which help transgender Christians mark their gender transition openly.

In the second batch, a private member’s motion (PMM) will move ‘That this Synod: (i) having accepted that Christianity is a monotheistic religion; (ii) noting the lack of mention of the nomenclature of ‘Trinity’ in the Bible; (iii) recognising that Christians are condemned to hell by the Qur’an if they believe in the Trinity; (iv) emphasising the need for reconciliation with 2.2 billion Muslims and the catastrophic consequences of disunity if this is not achieved; (v) moves to formally integrate Muslim festivals which have been rapturously received by a number of cathedrals and parish churches across the country; (vi) this motion requests the House of Bishops to review the mathematically inaccurate doctrine of the Trinity and consider whether it needs to be amended or abolished so as to ensure an equal place at all levels in the Church for Muslims, including ordination to the priesthood and episcopate, and to report to Synod by February 2020.’

Christians are condemned to hell by the Qur’an if they believe in the Trinity.

The PMM has been proposed by the Rt Rev’d Josie-Josiah Jimplecute, Bishop of Breadford, a diocese that has seen the highest number of Muslim immigrants to the UK. Bishop Josie-Josiah, the CofE’s first openly transgender bishop, has been pioneering Alpha for Allah, a course for Christians wanting to become Muslims.

‘Alpha for Allah shows how the Qur’an supersedes the Bible, since the Qur’an was written centuries later,’ explains Bishop Josie-Josiah, who has campaigned against the disturbance to Muslim sensibilities caused by church bell ringing. ‘Moreover, while higher criticism has destroyed the authority of the Bible by proving it was written by human authors, we can trust the authority of the Qur’an because we know it was dictated by the angel Gabriel to Muhammad,’ she added. She also notes the complete absence of German higher criticism, which has so undermined the authority of the gospels, but has left the integrity of Qur’anic inspiration untouched.

Commending the motion, Archbishop of Canterbury, Justin Welby, agreed he was strongly in favour. ‘Islam finds the idea of a Trinity utterly blasphemous to the idea of one God,’ he said in a BBC Radio 4 Thought for the Day.


Okay, by now you know this was a spoof.  Actually, I did intend to pull this because I had prepared it a while ago upon an email from a blog reader to this effect.  When I found out it was a satire, I was going to pull it and forgot.  In the end, though the piece was satire, I kept it up wondering how many folks would presume it was real.  The point being that we live in times in which it is not inconceivable to imagine that just this kind of thing would take place, especially within the CofE.  I daily get reports of things and only this morning opened an email from a blog reader indicating that California was going to pass a law that required all churches to have female clergy.  Again, though the claim was erroneous, we live in the kinds of time when it is more than credible to us that such could happen.  So I got busy this morning and just left it posted to see what would happen.  Thanks be to those who saw it for what it was but my favorite comment was Here's an idea: Archive this article in 2018. Wait 15 years.....until the year 2033. Republish this article. By that time, it will no longer be satire.  In other words, what is spoof today is probably tomorrow's reality!
Posted by Pastor Peters at 6:00 AM

Have you verified this before you posted it?

The Church of England is almost beyond parody but not quite, apparently...

This is why it's a good idea, not just for anonymous posters, to provide reference links, especially for extreme claims.

Here's the original June 26, 2018, article by Jules Gome, "Church of England’s Synod may abolish Holy Trinity to include Muslims."

Two days later it was republished with the author's permission on the Anglican Ink website, with the bracketed, "[A satire]" put right under the author's name.

Why would you refer to Pastor Peters as an anonymous poster?

Similar to a drug addict who cannot stop, those who wish to introduce social justice innovations to their church denominations will never say: "Just this much, and no more."

Soon they'll be writing other satire like how God is praised by having transgender bishops, women pastors, gay marriage and with homosexual activity...

If this happens, the Anglican Church in England will have shown itself to be an Apostate Church Body, and should incur the universal anathema of all churches that wish to be and remain Christian.

@ Anon at 1:07pm
No need to wait. The CoE is long since apostate, and should be anathema to all Christians. It lost the way a long time ago.