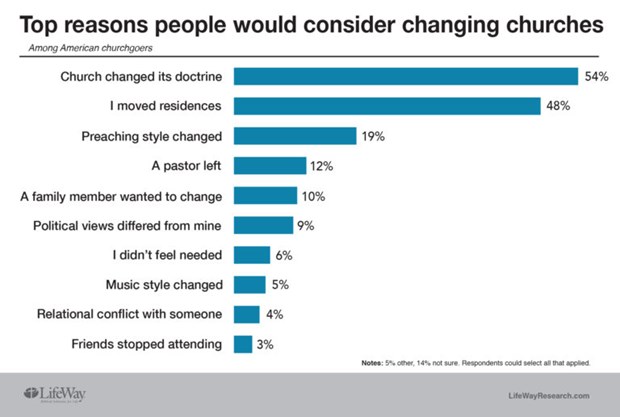 Among Protestants surveyed by LifeWay, a change in teaching is probably the most significant trigger to people walking out the door or considering taking a walk.  That said, the graph tells us what we already knew in that when people change addresses, they often change churches (denominations).  Surprising and yet somewhat predictable is the change in preaching style as a reason for considering a change (since preaching style and doctrine are often connected).

I suspect that people are not being entirely honest when it comes to music style changing.  According to LifeWay the number who mark this change as a reason for walking is surprisingly low -- 5% -- but we know that there is, in reality, a significant turnover when just such a shift comes (usually from traditional church music for that denomination to contemporary).  Of course, this is often accompanied by a change in preaching style and theological identity as well so it is not often isolated as the only factor.  Perhaps another reason is that so many of those surveyed by LifeWay have already long ago moved to contemporary Christian music -- so many that this has, in effect, become traditional for some, even many, denominations.

My favorite line in the study is:  The more people go to church, the more committed they are to attending their same church. How sad it is that we need to be reminded of this. The reality is that the people most likely to walk are those who live on the fringes of the church's life and work and identity.  It is unusual, though not rare, for folks who have been faithful and regular over the long haul to simply wake up one morning and seek a change.  In fact, the survey said that those who have been members over the long haul are pretty well certain they will stay until death or move forces them from their church home.

If there is cause for concern, it is that the average size for Protestant congregations is so small -- under 100 people.  If 15% of a hundred walk, that is going to be felt big time in those congregations.  If the congregation is even smaller, those leaving could make or break the financial viability of that congregation -- especially for denominations accustomed to a full-time pastor.  Most church members have been at their church longer than their pastor.  One of the most significant factors in people choosing to leave or to stay in their church is how much their identity is wrapped up in that congregation.  For many congregations, a significant number of members have been there longer than the current pastor.  Again, could this be saying something about pastoral longevity and how this affects the stability of a church's membership?  Could a revolving door history of pastors coming and going work against the congregation in a whole host of ways?  I suspect there is more here than meets the eye.  In the end this could give comfort to some and make others uneasy about the future.

Some 76% of those surveyed believe their participation in the life of their church has been helpful to them as individuals, helpful to their spiritual lives, and supportive of their faith.  That is a number we ought to pay some attention to -- only 3% think that statement is wrong or are not sure how true it is that their church has been helpful.  I must admit that I am a bit surprised by this.

In the end surveys can end up seeing only what they look for.  I hope that no one uses surveys to redefine what their church believes or does.  We ought to be more grounded than the latest and most recent poll.  But in the end, it does suggest that we should not be as worried as some have been that their people are waiting to run.  That said, non-denominational churches and those new congregations that pop up overnight seem to be overly dependent and crowded with people who left in search of something new -- and who will leave again if something new or better comes along.
Posted by Pastor Peters at 6:00 AM

I think the first item of response tells the main story; the church changed its doctrine. People expect stability in the church. They want a presentation of God that does not change. You cannot monkey with the worship service and expect people to believe that worship has not changed. The people are not stupid (but some church leaders certainly are).

I joined the LCMS when TLH was the standard hymnal everywhere, and as I moved around the country, the service was the same from place to place. Then came the changes, and eventually I left, looking for something like what I had known before. Happily, this brought me to Continuing Anglicanism, which reminded me in many ways of my Methodist childhood long, long ago. But it also had the beautiful, stable liturgy that the LCMS was abandoning.

The is an ancient Latin saying that is demonstrated to be true time after time: Lex Orandi, Lex Credendi.

So, you embraced the false doctrine of so-called "Continuing Anglicanism" because you could find TLH in use everywhere?

Ultimately, it comes down to the content of the pastor's preaching.
Is he proclaiming the Good News of Jesus Christ to those in the pews?
Is he rightly dividing the truth of law and gospel?
Are his sermons Bible-based and Christ-centered?