Jesus the Shepherd and Temple. . . 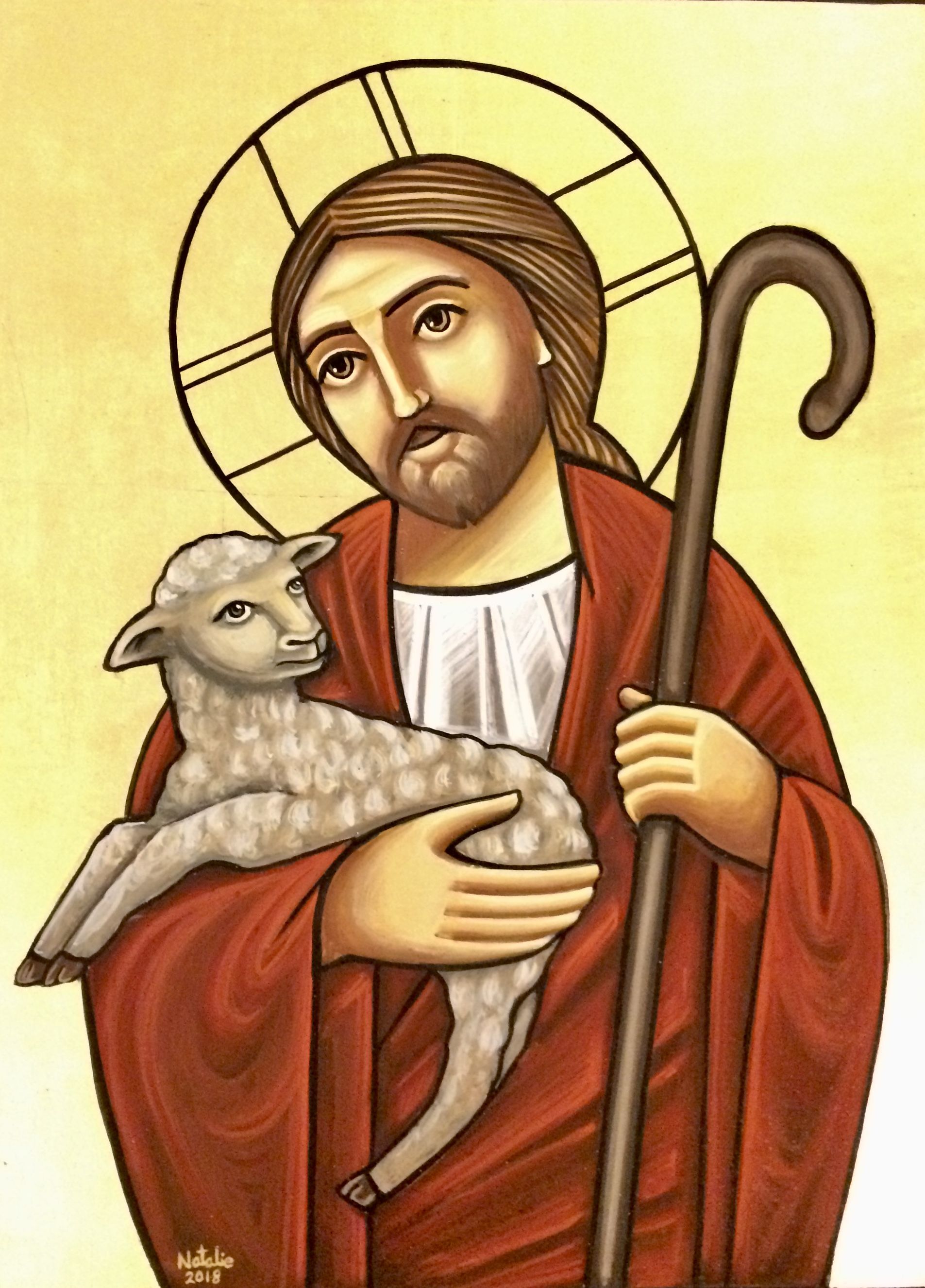 Though we seldom stop to think about it and rush to the familiar and comforting words of Jesus who says "I am the Good Shepherd," the John 10 text we read today as the Gospel for Good Shepherd Sunday has a context.  According to John, Jesus has made His way to the Temple for the celebration of the Feast of Dedication.  Of course, this feast has a prehistory but you know it best because it becomes later the Feast of Hanukkah.  It was on this day that Jesus said these words and this is the context into which Jesus places those words.

The Feast of Dedication is literally a feast of reconstruction.  In the time between the Old and New Testaments, read in the Apocrypha, First Maccabees 4:36-56, there is a story every Jew would have known and loved.  Some 200 years before Jesus was born, the Seleucid king Antiochus IV had overcome Israel and occupied its land.  He rejected monotheism and the God of Abraham, Isaac, and Jacob.  So he turned the Temple into Jerusalem into a shrine for Zeus.  To make matters worse, he insisted upon being called Antiochus Epiphanes – that he is literally the manifestation of God.

In the wake of such devastation, Israel was filled with mourning and lament but it was also a nation divided and weak.  There were the Chasidim (like Pharisees), the holy ones, who added laws to the Law of God but held to the whole Old Testament and who believed in the resurrection.  On the other side were the Zadikim or righteous ones who held only to the Torah and did not believe in the resurrection.  They were the forerunners of the Sadducees.

A Chasidim resistance leader by the name of Judah Maccabees arose who was so successful against the Zadikim that they appealed to Syria for help.  They got more than they bargained for.  The Syrians were not allies of the Zadikim; they came to steal the nation away.  Antiochus gloated as the governor of Syria was killed and then took up the cause against Judah Maccabees and the revolt.  His every attack met with greater resistence from the Maccabees, until, with a force of 10,000, they vanquished Antiochus to make Israel an independent nation once again.

Upon entering the Temple, they found the desecration and decay of the most holy site in Israel.  They cleansed the Temple, washing it olive oil, rebuilt the Altar of Burnt Offering, replaced the sacred vessels, and restored consecrated priests to Temple service.  With an 8 day celebration they rejoiced over the restoration of the Temple.  Now, 200 years later, Jesus stood there, recalling the great victory and the rejoicing over the fact that the forgiveness of sins might be the center of the Temple’s worship once again.

It is in midst of all this then, they asked Jesus if He was the Messiah  When Jesus answered them, they were ready to stone Him for His blasphemy. Into this Jesus says:  “I told you, and you do not believe. The works that I do in my Father's name bear witness about me, but you do not believe because you are not among my sheep. My sheep hear my voice, and I know them, and they follow me. I give them eternal life, and they will never perish, and no one will snatch them out of my hand. My Father, who has given them to me, is greater than all, and no one is able to snatch them out of the Father's hand.  I and the Father are one.”

Now we begin to see.  Jesus was not simply claiming to God here but uses this occasion to proclaim Himself the Temple of the Lord.  He is God and He is where God is to be worshiped. Jesus had already said, “Destroy this temple and in three days I will raise it up again.”  Jesus pushed the envelope hard.  All the Law points to Jesus.  The voice of the prophets speak of Jesus.  He is the Temple and His flesh and blood are the sacrifice.  He is the Lamb of God who takes away the sins of the world.  Jesus is who He claims to be; you know this because He does what He says He will do.

So when He says His sheep hear His voice and He knows them and they know Him, Jesus is exposing the unbelief of those who knew of Judah Maccabees but did not know the Law and the prophets.  For if they knew the Scriptures, they would know that the Scriptures testify of Jesus.  His disciples did not challenge Him but followed Him.  In return Jesus gives them more than the forgiveness of their sins but the surprise of everlasting life.  They belong to Him and neither death nor all the powers against Him can snatch His sheep from His hand.

We like symbolic language, like when God likens Himself to a mother hen seeking to gather His people like a hen gathers her chicks under her wing.  Most appropriate on Mother's Day, you know.  But Jesus is not using symbolic language.  Jesus is not talking theory here but practices what He preaches.  He dies to prove that death cannot steal us from Him and He offers Himself as the sin offering to prove that sin cannot condemn us when we are in Him.  He over comes all our enemies to prove that we have nothing to fear.  He is on our side and now, by baptism and faith, we are His sheep, the flock of His hand, not volunteers for the Kingdom but those whom the Father has elected to salvation and given to Jesus to be His own.  No one can snatch us from Him.  Nothing can steal us from Him who has done all things so we might be His and live under Him in His eternal kingdom.

And if Jesus is the new Temple, if He is the Lamb of God who takes away the sins of the world, what does it mean to follow Jesus?  It means to be where the voice of Jesus speaks His Word to us and here where the sin offering has become our meal in the Holy Sacrament of the Altar.  It means not an end to the Temple but its fulfillment and not an end to sacrifice but one all sufficient sacrifice which takes away the sins of the whole world.  It means standing together in this faith and worship, holding up this Gospel before the world – not a private faith or an individual before God.  What do we say?  As often as we eat of this bread and drink of this cup, we proclaim the Lord’s death until He comes.”  This crucified and risen body and blood is our witness to the world.

The Good Shepherd is not some symbolic identity but the real thing.  He has reconstructed the Temple in His flesh, crucified and risen.  Read in the book of Revelation and you will see that the Temple is not erased but fulfilled in Christ.  He is our Temple.  He is our Light.  He is our Life.  We know the Father through Him and the Father will send forth the Spirit in His name in order to bring home to our hearts and minds and lives this blessed truth.  This is what binds us to Christ and it is in this that we live and work and have our being.

Faith is not a good feeling we get from Jesus but the assurance and the confidence that Jesus is who He claims to be and has done what He has promised to do.  God has reconstructed the Temple in the crucified and risen flesh of Jesus and God still speaks to us the voice of Jesus through the words of Scripture.  You stick with this Christ who gives us His flesh and blood as our food and you cannot be snatched form His hand by any power or any enemy.  You stick with this Christ who speaks that we may know Him and follow Him and no one and nothing can snatch you from His hand.  You be where Christ is in His Word and Sacraments and He will dwell in you.

For eight days the Maccabees rejoiced over their victory over Antiochus and the restoration of the Temple.  Easter is the 8th day, the beginning of a whole new reality. Our joy will not be limited in time but is now and will be eternal.  He will raise us up and He will be our Temple for all eternity.  This is what we see now through a mirror dimly but what shall be clear and plain on the last day.  This is the victory He has won and the gift He has bestowed on us by which any and all who will be saved shall be saved.  Thanks be to God.  He has done all things well.  Christ is Risen!  Alleluia!

Credit goes to Pr. David Peterson for inspiration.
Posted by Pastor Peters at 6:00 AM

Wonderful sermon. Thank you, Pastor Peters, and thanks be to God.
He is risen indeed.
Peace and Joy!
George A. Marquart