Presiding over the death of a church. . . 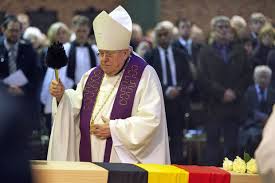 I have an acquaintance who spent more than a generation in a dying congregation.  He was a faithful pastor who stayed with his people until the decision was made to close the doors.  He was there for the final service and assisting the congregation in disposing of its property with the dignity that a house of God deserved.  It died not without his and the faithful efforts and energy of the people.  Of course, it is always true that more could have been done but he accorded himself both with dignity and faithfulness to the very end.  It did not take long before another congregation called him and he went to his new call to fulfill his pastoral vocation, though not without sadness for the congregation that had closed its doors under his watch.  He was a faithful shepherd nonetheless.  He will always be remembered for his work to keep what seemed inevitable from happening.  No one likes to be the last pastor out the door and yet sometimes somebody has to be that man.

In contrast, a month or so ago a man died after not only watching his church die but hastening on the death by gutting the church of the integrity of its doctrine and by relativizing its truth until there was little distinctively Christian left in her.  She still has buildings but they are largely empty and her once thriving Christian presence is now a hollow shell where faith once lived and now is gone.  But this man was a darling of the media and a power broker in the larger church.  In his death, many honored him for his work, though the work itself was one of the contributing factors in the death of his church under his stewardship.  The man was Cardinal Godfried Danneels and the once impressive Belgian Roman Catholic Church is a prime example of the emptiness of progressivism and the lies the progressives tell. He was a personable figure, well educated, fluent in many languages, and a prince of a guy -- except to the orthodox tenets of Christianity and to any orthodox morality and ethics consistent with this confession.  The man delighted in every wind of change and embraced them with vigor.  About the only thing, it seems, he could not stand is orthodoxy.

It is a tale of contrasts.  If a faithful pastor preaches and teaches the faith and exercises faithfully the ministry committed to him and a congregation (or more) dies under his care, there is no scandal or apology needed.  But when an unfaithful pastor distances himself from the very faith he is supposed to proclaim, works to enhance the breech between the church of old and the church of day (and tomorrow), that pastor has traded his integrity and, indeed, his dignity for a pot of lentil soup and betrayed the office and trust placed in him.  The greater shame lies with Pope Francis and others who continued to befriend and laud this man even after his retirement and the Belgian Roman Catholic Church was placed on life support.  This man failed the faith and the faithful failed this man by treating him as if he were noble and honorable.  There is no honor in doing everything in your power to kill what is entrusted to you as priest or bishop.

This is what I find so curious.  Why does the world continue to laud progressives who doubt the Scriptures and distort worship and play church as if it were a power game?  Why do men like these retain respect from those outside the faith and those within the confines of churches?  Why is it that it is so painfully obvious to everyone but those in the media and the progressive movement that robbing the faith of his historicity, tearing down the pillars of liturgy and morality, and erasing the distinctions between the Church and the world is sounding the death knell for the faith?  How many more empty church buildings and regional churches must be lost to inconsequence in the name modernity or progressivism or improvement?  Lutherans and others need to beware of those who come to save the patient (the Church) and who find they must kill her to save her.  The Church already finds the way to apostasy hard to resist; she does not need the powerful voices of leadership to help her on her way.  I know it is heresy today but the Church will not die because we have always done it that way before.  But she will die or at least lose her soul as we abandon her dogmas and her identity in worship to the prevailing mood of the times.  The world does not long need or show much interest in a hollow echo but the Word of the Lord will endure forever and out of the ashes God will bring the elect to their appointed destiny long before the foundations of the world were laid.

Sad to say it but the world does not need nor have those like Cardinal Danneels does anything on behalf of a Church that cannot close her ears to the whisper of change which leaves the faith and the faithful weak and vulnerable.  There is a lesson for here for us.  There is no dishonor in being faithful and faithfully serving the Word and Sacraments and the doors to a church building closing but there is no victory in dishonoring the faith and the faithful for the sake of every whim of doctrine and change.  In the end, they will have to account to a higher authority but their progressive works will follow them and stand as evidence of their failure to uphold the sacred deposit and pass it faithfully on those of the next generation.  Lutherans are not immune from such leaders, either, and we need to pay attention to the example set by those who ending up killing the Church trying to maker her relevant or palatable or modern.

Once the people become absorbed in themselves alone, and once the word of God seems irrelevant, churches die off, Religion becomes a mere tradition without substance, and faith dies. The death of a congregation due to lack of interest is a sad thing indeed. Now we know why the prophets of old were sorrowful and dour, even as they cried out for repentance....and the people then, as well as now, closed their ears.