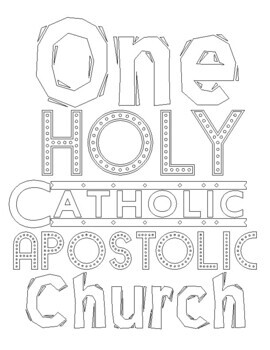 Though the Reformation is often blamed for the fracturing of Christianity, the truth is that the Christian Church has been divided many times and from the evening of the apostolic age.  Read of the problems St. Paul encountered and of the warnings and admonition given to gospels other than the Gospel he proclaimed, of the Supper of the Lord which was not a Lord's Supper because of their actions, and of the divisions to be marked.  Add this to the call to maintain the unity of the Spirit in the bond of peace and you have the circumstance of clear division.  Although not all congregations the one who is least of all the apostles planted caused him troubles, it is unmistakable that some did and were not of the same doctrine and faith as St. Paul.  Indeed, we know of this problem from the First Epistle of St. Clement and from St. Ignatius.

Everyone, including those marked heretics, believed the Church to be one and theirs to be that one Church.  While St. Paul did not shy from appealing to his apostolic authority, it was and remains the doctrine that binds the Church as one and not persons, personalities, or particular offices.  Our oneness at the altar receiving the Eucharist has been and remains broken.  The first and larger breach came when East and West refused communion to each other and, although conversations have been held more recently, no progress had been made on its healing.  That said, our oneness is not nor has it ever been an achievement of man negotiating and conciliating consensus.  The unity of the body of Christ is and always has been from the perspective of Christ who knows His own.  The broken state of affairs we see should not ever allow us to be complacent about such division nor should it ease the burden upon us to make sure that such divisions are over substance, when and where they must be for the sake of the Gospel itself.  Yet it must also be said that such a state of broken communion was not and is not a judgment upon the faith of the individual.  Everyone who calls on the Name of the Lord shall be saved.  As true as this was and is, it is just as true that until time ends, not all who call on the Name of the Lord will be united at the same altar receiving the same Sacrament.

The episcopate, the canon of Scripture, and the regula fidei (tradition) were three norms of authority to benefit the orthodoxy and continuity of the one, true, orthodox and apostolic Church but only a fool would suggest that they were successful in preventing division.  And yet, it is doctrine that is the unity of the faith and the faithful -- doctrine sourced in Scripture, taught by the apostles, and confessed through the ages.  It is this that has and always will both unite and rightfully divide when error, falsehood, and other sources of revelation conflict with Scripture and the doctrine that flows from it. Everyone who calls on the Name of the Lord will be saved, but when it comes to those who sup together at the Table of the Lord, a common confession is the minimal requirement of such visible unity and koinonia.

While doctrinal debate is often castigated as fighting over words or trifles or babbling to hear one's self speak, doctrine is the kerygma (see Iraneaus) which like the sun, shines with the only and one true light so that all people might shine like the sun by coming to the knowledge of the truth.  For myself, I hate the modern day translation of didaskalia as teaching and think the King James got it right by using doctrine in nearly every case when that word appears in Greek.  Nobody over time and history confessed that they believe what their bishop believes but everyone -- even heretics! -- claim to confess what Scripture says.  In this regard, doctrine is confession.  When in Nicea they confessed we believe they were not venturing an opinion or taking sides or offering a perspective but insisting that this is what the Church believes, teaches, and confesses; what has been handed down through the ages; what is still taught by those who stand in Christ and with Scripture.  It is this that is the catholic and apostolic faith and this by which those who come to the altar are examined and admitted.  It is this Church that is the One Church -- not the one with a legacy or a Petrine Office or tradition or statistics.  It always was this way and it will always be.  While that says nothing against the clear confession that all who call on the Name of the Lord will be saved, it admits that this is not how the familial fellowship of the Table works.  That the two must live side by side is itself a confession of the fractured state of Christianity that can only and will only be mended by Christ when He comes in His glory.