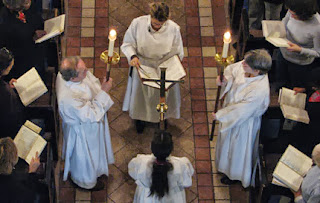 One of the curious things is also one of the most obvious -- that Scripture is not primarily words but a voice speaking.  I fear that in our context of a published book, we have forgotten that God's Word is a living Word, a living voice, that speaks.  We think of printed words on a page and of an individual reading those words, interpreting them for him or herself, and applying those words personally and individually.  That is not the context of Scripture from the beginning but a very recent aberration and one that is fraught with tensions and problems.

Scripture was primarily a worship and catechetical book in the Old Testament.  It was found in the community of Temple and synagogue and not on a bookshelf in a home.  People assembled together to hear the Word, just as they did in Luke 4 when Jesus got the scroll, opened to the text appointed for the day, and preached not only by Jesus' speaking but by His very presence as the Word Incarnate.  In the assembly is where the Scriptures were heard by most folks -- at least until more modern times.

In this respect Scripture is ecclesiological -- it is the Church's book, addressed to the Church, received by the Church, and taken up by the Church as her voice to the world.  In contrast, we have come to think of the Bible as the people's book, to make of it what they will, and therefore devoid of meaning and purpose except those assigned to it by the reader.  It is no wonder that people are all over the page when it comes to what the Word of God says.  In fact, the soft underbelly of Protestantism is that private interpretation has not only become the norm but the ideal.  We may come together to share our individual insights but we do not think of God's Word as being addressed to the Church and not to us as individuals.

Furthermore, Scripture is liturgical.  Its context is liturgical -- not simply by virtue of its history of use within the assembly of the Old and New Testament communities but because it is an efficacious or sacramental Word that does what it says as well as mean what it says.  The whole purpose of Scripture is not to inform but to bring the sinner into the presence of a gracious God so that the forgiven sinner might worship the Lord in spirit and in truth (a clear reference here to the means of grace!).  Scripture is a living Word and speaks life -- and the Holy Spirit is the breath and power that not only prepares the hearer but enables the hearer to hear in faith and thus enter into the Body of Christ as that Body is gathered around His Word and Sacraments.  All Scriptural is liturgical because it testifies to Christ and Christ brings us into communion with the Father -- worship.

In a tragic sense, the Church has surrendered too much of this.  We have surrendered the Word to the Biblical scholars to tell us what we do not know -- as if there is a hidden meaning or a hidden reality about the text that must be unpacked by an academic or intellectual pursuit.  The Biblical scholar no longer sees their work in service to the Church but often in opposition to what the Church has believed, confessed, and taught -- as if we naive or ignorant and must be taught.  In a strange sense, most of modern Biblical scholarship begins with presuppositions that either undermine or exist in opposition to the basic tenets of faith.

Further in this vein, the Church has allowed Scripture to be ripped from its liturgical context and so its goal is no longer Christ but the satisfaction of our curiosity or the explanation of our problems in a way that makes us feel better.  Has the work of Biblical scholars aided in the proclamation of this living Word or distracted from it?  Have the individual interpretations that flow from the personal reading of Scripture aided in our worship or impeded that liturgical assembly?  Is Christ the goal and the end of Scripture or is there another goal or end?  The goal here is the edification not simply of the individual but the building up of the Body of Christ.

Liturgically we address this.  The lectionary volume in our parish is encased in a silver book cover.  It signals in a visual way that this is not simply a book nor is Scripture like other books.  It is the Word of God.  When we carry this book, we honor it because it belongs first to Christ and exists to accomplish His purpose.  Its words are not ours and the voice that reads it is its voice -- it remains God's Word to accomplish His purpose and His voice even though the mouth of the reader.  So the reader finishes the text by saying:  The Word of the Lord!  And the people respond Thanks be to God!  When the Gospel is read in the midst of the assembly, accompanied in procession with the processional crucifix and candles, it gives even more profound notice that this is God's Word, that it speaks Christs and Him crucified, and that this Christ is our Light and our Life.  We turn to meet this Word and we remain standing until it is placed upon the lectern, acknowledging its unique and special place.  I hope that we learn to address this, within the congregation, to be sure, and especially within the formation of pastors in the seminaries.