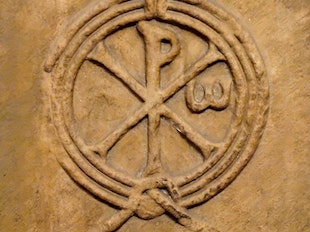 It would be humorous if it were not so sad that Rome lives with the lie that everything promulgated by Paul VI was mandated by Vatican II.  Ample research has gone into the Bugnini deception and how the work was a surprise even to the Pope in whose name the changes were established.  So it is more than curious that Vatican II would become the center of what is really a power play within the Roman Church.  It has become the dividing line of theology and, to some on both sides, orthodoxy.  To the Latinists the Novus Ordo is the Mass of Discontinuity that casts a shadow of doubt and uncertainty over the whole pale of the Roman Church.  To the progressives, the Novus Ordo represents the only legitimate expression of Roman piety and how you feel about it is the litmus test of godly obedience.  I suppose if I were Roman Catholic it would be harder to make a joke about this but, come on, is this the thing that ought to be consuming Rome's time?  Apparently the current Pope is threatened by those who prefer the Mass that ruled time for more than 400 years and the ridiculous sideshows that too often accompany the Novus Ordo have tainted it forever in the minds of his opponents.  Meanwhile, Rome withers in size and fights doctrinal wars over its very soul.  The preference of one form over another ought to be the least of Papa Frank's problems.  But it is not.  Perhaps it is convenient distraction from financial scandals, German liberals, the inculturation of pagan symbols, the faithful unsure if Christ is really present in the Sacrament, and the constant emptying of the pews.

It would be humorous if it were not so sad that Lutherans live with the lie that the Reformation were about the freedom to ditch vestments, lectionary, liturgy, reverence, ceremony, and the like.  Adiaphora has come to mean whatever and Lutherans now resist every impulse of what was once normal among us in worship and piety.  Ample research has gone into the deception that a conservative Reformation is really a radical one and that Luther's appeal to conscience therefore justifies everyone's preference for what is meaningful and speaks to their soul on Sunday morning.  In the end, like Rome's battle, this is not simply about things liturgical but a battle for the soul of the Churches of the Augsburg Confession.  Are we who our confession claim us to be or are we who we feel like at the moment?  To the progressives anything and everything that might be misunderstood or not appreciated by the outsider who enters our services for the first time could and should be discarded in the cause of Christ.  I have had it put to me that crassly:  would you keep chanting or vestments or reverence even if it meant somebody might reject the Gospel because of these things?  Really?  The confessionals among us spend too much time warring over page 15 in TLH or Setting 3 of LSB against the other two settings as if it were impossible to use the newer rites with any doctrinal integrity (along with conflicts over lectionaries, etc...).  Meanwhile Lutherans is in the battle for its soul -- with liberals on one side who love the forms (stripped of their masculine pronouns) but who don't bother believing the words and evangelicals on the other side who keep trying to turn the Divine Service into a holy variety show that entertains and saves.  In the end, we have our own pews emptied by age and the failure to catechize and our own crises of what is believed, practiced, and how it is paid for.

Let us be honest.  The biggest Roman Catholic Church in the world are those who used to be Roman Catholic but no longer go to confession or mass.  They claim a membership which is hidden even to them.  The biggest Lutheran Church in the world are those who used to be Lutheran but no longer attend the Divine Service or see any difference between Lutheranism and any other generic Christianity devoid of sacramental life and creedal integrity.  A pox on both houses!  This is the fruit of a failed catechesis that taught the faith as if it were imparting head knowledge instead of a baptismal vocation that can and must be fulfilled in our life together around the Word and Table of the Lord.  Lutherans are not Baptists in formal dress nor are we evangelical wannabes.  Both of those are false identities that betray the central Lutheran claim to be catholic in doctrine and practice -- the genuine catholics!  Rome is suffering because they built a house of cards created by the impression that they created Scripture and can invent things to bind men's consciences (from purgatory to the treasury of merits to the good works that contribute to your salvation).  The salvation of both is found in the same place -- the Word of the Lord that endures forever.  This was surely Luther's dying hope -- not that Rome would become Protestant but that it would be reborn the attention to the Word of God.  This was surely Luther's dying fear -- not that Lutherans would become Roman Catholic but they would fail to be catholic and in so doing would forget that their life is formed, shaped, and empowered by the Word of the Lord that endures forever.

I will admit to the pipe dream that perhaps the Reformation was ongoing and its work within Rome was not stalled and that its expression within Lutheranism was to live out fully our confessional claim of catholicity.  I am a dreamer.  I admit it.  But that is where I live. . . in the dreams of what could be if we all lived by the Word, font, and Table of the Lord.

What a great line. The Divine Service in the typical LCMS church is a holy variety show that entertains and saves. We have jokes, announcements, guest speakers and lectors not quite ready for prime time, aging soloists and campfire guitar solos, guest animal visits and updates on the church dog, all seamlessly woven throughout the historic liturgy. Is it a mess? Of course it is. But this mess is nothing new. American Lutherans have always borrowed from popular culture. Congregants complained in the 1920s about choirs singing “barber shop quartet” style tunes. And choirs still sing Broadway style anthems. Many Lutheran churchgoers on Palm Sundays in the past looked forward to hearing “The Palms,” which itself was a semi-operatic French chanson from the turn of the century. Even Handel’s “Messiah” was devised as holy entertainment.

While the Augsburg Confession maintained that we upheld the beneficial catholic liturgical traditions, there is also the emphatic pronouncement that church ceremonies need not be the same everywhere, which is itself part of the catholic tradition. While I personally would like to see the liturgical movement meets Protestant megachurch drama of the Tenebrae service replaced with a CPH edited congregational friendly version of Bach’s St. Matthew Passion in LCMS churches on Good Friday, it ain’t gonna happen. Our practices are shaped by where we are in place and time. Yes, Protestant visitors are often confused in a Lutheran church by altars and vestments. But we do a disservice to our doctrine by explaining these as truly catholic. We should explain these instead as things we observe, unlike any other Christian tradition, in freedom. “Why do you have an altar?” “Um, because we can and we feel like it.”

Quote: We should explain these instead as things we observe, unlike any other Christian tradition, in freedom. “Why do you have an altar?” “Um, because we can and we feel like it.”

If that is the best we can do to answer a question like that, then we ought to give it up. My point being in a conservative Reformation you do not begin with freedom but with the idea of keeping as much of what was as is possible, because it is good and salutary, because it points to Christ, and because what we receive there is the body once crucified and with it every fruit of the atonement accomplished upon the altar of the cross. We at least ought to be able to point to Hebrews and its liturgical context to the proclamation.