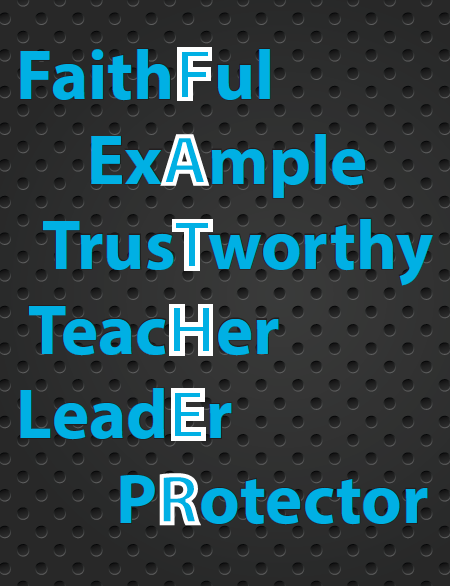 Leadership in the home is the work of fathers.  They are those who act to protect, provide, and preserve the family by emulating the love they have learned from God, and, prayerfully, through their own fathers.  We do not elect leaders of a household nor does such come from right or demand.  That is why the father is so important in the home.  He leads by example.  He demonstrates to his best ability the values and path of the Kingdom in a life of devotion to his family, sacrifice for their well-being, and faith anchored in God's Word and Sacraments.

The structure of the congregation mirrors the family.  It is not, as many have posited, a business or institution or agency or association but a family.  We do not affiliate as much as we are are born into the Church and have our place in that Church within the family of a particular congregation.  Although the role and office of pastor has many perspectives -- in the person of Christ or His icon to the people among them and as shepherd to the flock under the Good Shepherd -- not in the least of which is that role as father to the faithful.  This is much in the way St. Paul saw his relationship to St. Timothy.

It occurs to me that the best example for a new pastor at the start of his ministry is a good and faithful and pious father (or father figure) growing up.  This role is the more apt role to describe what a pastor is, what a pastor does, and how a pastor relates to his people.  It is not surprising then that Father is the term most Christians use in addressing their pastor.  Even among Lutherans that term has remained (especially in Scandinavia).

So when we train up men to be pastors, are we training them to be leaders of the flock or fathers to the flock.  Maybe this is part of the tension that exists between seminaries and some of the slack being taken up by parachurch organizations.  The institutional structure of the Church would like leaders -- visionaries who see the future and organizers who help to make it happen.  We have had our fair share of those in history and perhaps some see this moment as a time of need for leadership.  But I am not sure.  I think the pastors we need are fathers to the faithful, fathers in the way the father was once universally known in the home.  We live in precarious times for orthodox Christianity and a period of decline that tempts us to despair and fear.  We need fathers anchoring the homes of our people and we need such father figures in our churches anchoring our people to God's House.  At least part of the seminary role needs to be figuring out how to communicate this need and how to teach men to be this kind of parish servant to the people of God.

Though the numbers of fathers in the home is not as robust as it once was and there are too many children being raised without this kind of father in the home or father figure to turn to, that does not mean it is not urgently needed.  The same is true of the parish.  Leadership is good but if it comes at the expense of being the father to God's people in the example of our Heavenly Father, something is lost that will only hasten the decline and tax the strength of the congregation even more.

Fathers, you are not only needed but essential to the family and the life of the children.  Your example is not simply optional but part of the very core of what it means to be a family.  Your role as spiritual father within the home by word and example is equally profound.  God bless you as you work to fulfill that role and for those who serve as surrogates to those without such a blessing.  God bless you pastors and your role as spiritual fathers to the flock of Christ.  If I had to choose, I would willingly sacrifice leadership (in the professional sense) for a strong fatherly figure at the altar and font and in the pulpit.  These are the times in which such a role and relationship are essential to the Church and the future.