A serious question came to Fr. Z at What Does the Prayer Really Say.  "Is it okay if children 'play' church?"  My mind raced back to the vivid memory of a special funeral held in our back year.  We had a couple of turtles and one of them died.  My mom had been cleaning the turtle and they normally loved to extend their neck into the water flowing from the faucet.  This time the turtle did not come out to play.  When mom shook the turtle, the head came out limp and dangled beside the body.  He had gone to be with the Lord.  I don't recall how old I was -- I know it was before 1965 but how many years before then I could not tell you.  What to do?!?

As I recall it my brother and I made a casket out of a Kleenex box.  We opened the side and slid the turtle in so that the transparent plastic that held the tissue up served as a fine open casket.  The neighbor kids gathered to pay last respects and I got out the old hymnal (TLH) to pray, sing, and commend this blessed creature to God's eternal mercy.  It was not done as a joke but with the greatest of seriousness.  All in all I believe it was one of the best turtle funerals that Northeast Nebraska had ever seen.  Follow the burial I believe we went inside for some kind of refreshments.  The turtle was Lutheran -- he must have been cause we were (are).

Now when you stop laughing and decide to read on, I did not post this for the humor of it (though I do understand that some of you are practically giddy at the thought of me as a child giving a fine Lutheran send off to our turtle).  That turtle funeral was the concrete expression of what I had learned in Church on Sunday morning, in Sunday school, VBS, and from the faithful prayers and witness of my wonderful parents.  It was natural for me to think of a funeral, a Lutheran funeral, using the hymnal that I used on Sunday morning and drawing comfort and consolation from the faith that spoke to me of life and death and resurrection.

I wish more kids played church -- not as a joke but as kids do -- enacting in their play what they see and hear and believe.  As kids we played cowboy, we played army men, we plotted out villages in the dirt and roads on which to drive -- all of these were learning experiences as well as the living out of the things we knew and loved and respected and believed.  My kids knew what church was and it was as much as part of who they were as anything else.  I know that one or two of them played out what they saw me do on Sunday.  That's a good thing.  Children should and we don't need any prudes suggesting that it is irreverent or foolish.

So if you find your kids playing church, don't yell at them.  Take them seriously because they are being very serious about very serious things.  If you must laugh, do it after they have gone to bed. 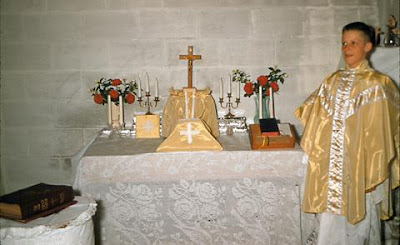 At the same blog I saw a picture that made me green with envy.  Some kid born about my time had a mom who sewed him up some vestments and he had an altar set up that would have made my little Lutheran funeral look like a Baptist revival.  I don't know what I can do but imagine what I might have done and what the whole neighborhood of kids might have learned if I had only had the tools and resources this boy had.... oh, well, I still think we gave our turtle a mighty fine send off -- even if we were a little sparse on the amenities.
Posted by Pastor Peters at 6:00 AM

Thanks again, Pastor, for something good to ponder.

I suppose I can imagine that some folks might have a problem with children playing "church", but I'd never considered this prior to reading your post today. It seems a rather strange, fearful pietism of sorts...

My youngest son, Nathan, from the age of two started playing church - quite earnestly. In time, he found himself all the amenities and garb: his Small Catechism served as his hymnal, an old clerical shirt of mine fit him nicely as a cassock, and a must-have for him was a stole (a long strip fo red felt fit the bill nicely).

He even found a small portable box which he stocked with small containers and plastic discs that served as his Communion kit. He would walk around the living room, handing the small, plastic discs to everyone who was there, saying, "Take, Peace" (what his child-like ears heard at the communion rail's invitation to "Take, eat").

We found it all wonderful, and a reminder that the Liturgy does speak to the little ones; this is what Faith does, after all...

It's possible the kid's Mass kit was bought, not homemade. They used to sell such things in those days -- I had one, but the chasuble was vinyl.

I don't really have an issue with kids dressing up and playing church. Just adults. Most of us are butts in the pew.

As to pet funerals, I've had several of them in the back yard. Animals do not have a human soul therefore do not need salvation as we do. Which is not at all to say they have no future. All creation has a future. A pet funeral celebrates the new heavens and the new earth to which all creation is drawn in Christ.

Perhaps with tongue-in-cheek, here's a ad to help the liberal LCMS kiddies in "playing church"."

That young man sets a fine example for pastors in the LCMS. Great stuff.

Well, since we don't "reserve" the Sacrament since we follow Christ's institution to Take and Eat/Drink and also don't think Eat is enough without Drink, we ain't got no tabernacles.