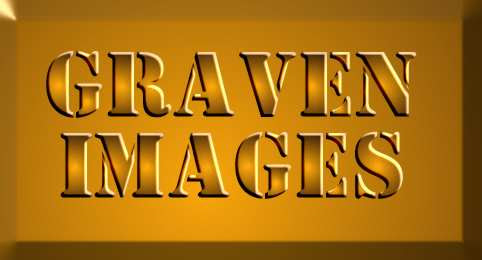 It always comes as a shock to people who pick up a plaque or such at a generic Christians bookstore only to find that their commandments are not the same as the ones Lutherans have learned from the Catechism.  Ahhh... it all boils down to graven images.  The generic Protestants combine our 9 and 10 but add one earlier to end up with ten but a different ten commandments.

Truth to be told, I had long ago thought that some had given up the Quixotic jousting at images.  Christians with icons, statues, crucifixes, and paintings so far outnumber those who would prevent them that it is not even close to a horse race.  Funny thing is that we regularly get calls from Church of Christ, Baptist, and other similar folk asking if we rent out our sanctuary for weddings (we do not).  It is so "pretty" and the organ and instruments possible make for a "perfect" setting not always available in their own church homes.  So you might have thought the old accusation against formalism and idol worship had lost its shine.

As an example, let me quote from noted Protestant author John McArthur:

Idolatry is worshiping the wrong god and worshiping the right God in the wrong way. ... I think idolatry is also worshiping symbols that may stand for God. Now we've all-been aware of what is known as the iconoclastic controversy from the word eikon in Greek which means "image." Throughout the history of the church, the church was in its early manifestation of Romanism wanting to put everything in statues and the Roman Church still does that. ... And you still have crucifixes and other images and saints and so forth that represent a certain kind of idolatry. And you say, "Well, we don't really worship the idols it's just that the representation is there." Yes, but the transition is so subtle...so subtle.

We Lutherans seem particularly vulnerable to the attack since we have always felt somewhat self-conscious of our catholic heritage and identity.  When we find out that a set of commandments includes the prohibition of graven images, we literally go into heart palpitations -- on the one hand fearing we might have gotten it wrong and on the other hand relieved to note that something we never really felt good about just might have to go and Scripture could justify the exit (thinking here about the crucifix).

So it happened that a little plaque showed up at church given by a well meaning person who, perhaps, did not even realize that there was a commandment there Lutherans do not number and two that Lutherans do number have been merged...  I have already gotten a few questions about it.  I direct folks to the catechism.  Start there.

We could have a battle of competing Bible passages but it is worth noting that the icons, statues, crucifixes, and religious art of God's House is not art per se but visible Word -- that is, it illustrates what God has said and done.  From the beginning of its building, God commanded images to be graven for use in the temple.  Our Lord took on flesh and blood and so gave us the image of His divine nature in material form.  The sacraments instituted by Christ use material forms to make the divine accessible to us.  We have an almost unbroken history of support for Christian images (culminating with the iconoclastic controversy and the Seventh Ecumenical Council.

Funny how sensitive we are on this point... Perhaps distinguishing ourselves from the Roman Catholics is enough to make us eschew the catholic identity that is the core of our Lutheran Confessional identity....
Posted by Pastor Peters at 6:00 AM