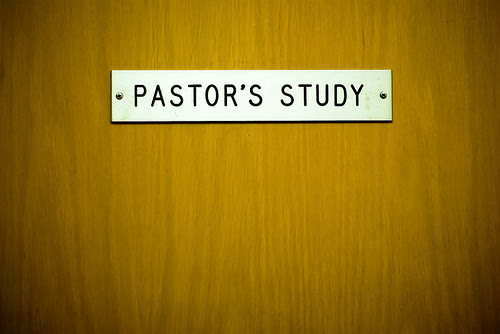 You can check an earlier post for the SMP task force recommendations and my comments.  Apparently, CSL is not in much agreement with that report or its suggestions.

In the preliminary sections, the Concordia Seminary response takes us through a little history lesson.  One glaring omission from the section on the New Testament is the lack of any clear statement that the pastoral office is not established by the Church but by the Lord and is not optional for the Church.  Second is the implication (either accidental or intentional) that the primary focus of this office is to preach Christ (absent any equal weight given to the Sacraments) as if the function were divinely initiated but not the office.  I may be reading too much into what is missing but it seems to me that this omission may be telling.

In the section of the Reformation, the seminary that once was home to Dr. Arthur Carl Piepkorn has now decided the rite vocatus includes no reference at all to ordination.  Hmmmm....  That's different (as they say in Minnesota when they disagree).  It would seem absolutely incredible to focus on "call" as we understand it today to be the definition of the Latin, especially considering that Rome in the Confutation seems to have had little concern about Augustana XIV as a clear statement of catholic teaching and practice.

We read from the Seminary:
Ordination is not mentioned, probably because Melanchthon wanted to avoid the sacramental implications associated with it, even if he could admit, by changing the definition of “sacrament,” that Lutherans approved ordination as they understood it (Apology XIII). “Properly called” (in Latin, rite vocatus; in German ordentlichen Beruf) meant, in 1530, “decently and in order” according to the expectations of the Roman Catholic party within the German Empire.

It seems highly speculative that Melancthon was so concerned since the whole nature of the first twenty or so articles of the Augustana was to establish those areas largely in agreement with Rome. It seems to me that the authors of the Seminary document are slanting history a bit to justify their own conclusions (read further).

In the end the Concordia Seminary response says:
Well, again, you can read it all for yourself.

In the end I am less impressed with the Concordia Seminary response than I had hoped.  It seems to say, keep what we have, don't worry be happy, and we will make sure everything is okay.  None of those can I agree to without a great deal of anxiety -- especially given the track record of our Synod in convention and the direction of the Seminary in St. Louis over the past several years.

Here are the resolutions offered to the Convention in the wake of both reports.

I read the linked report (well, I read about half of it and skimmed the rest), and now I am seriously depressed about our Synod. The report is theological and historical nonsense; and it represents the opinions, the scholarship, and the convictions of the Synod's leading seminary. If this is the best theology our Synod has to offer, then we are in a heap of trouble.

A combox does not provide nearly enough scope to list the errors of this awful report. I will content myself with a few examples.

Most telling is the simple outline of the report: first the New Testament; then the Reformation; then the practice of the LCMS. Conspicuous by its omission is a millennium and a half of Church history, between the writing of the NT and the posting of the 95 theses. The historic Church is thus deprived of her witness to how the Apostolic deposit of faith was understood and worked out in practice. What we have here is a model of Church history which says, in effect, that the Church apostatized as soon as the Apostles died, only to be miraculously rescued by Luther. It is an approach to history more worthy of Stone and Campbell than of Luther and the Reformers.

Essential to this program of forgetting that we are Lutherans is twisting the meaning of the phrase rite vocatus, by ignoring the primary meaning of the adverb rite -- "according to religious usage, with due observances, with proper ceremonies, ceremonially, solemnly, duly" -- and reducing it to a meaning of "customarily". That is, of course, a sense which the word does have, but it is an extended sense which arises when rite is used outside of its original religious context. But the Augustana is certainly not outside that context.

Finally, there is this:

Luther rejected the definition of being Christian in terms of the performance of liturgical rituals ...

Is this the same Luther who insisted on the "liturgical ritual" of Holy Baptism as the indispensable foundation of the Christian life? Or the same Luther who approved the Augsburg Confession, whose article V confessed the public ministry of Word and Sacrament (i.e. the Church's "liturgical" ministry) as the means through which the Holy Ghost and faith are given to us? This facile opposition of "preaching" vs "liturgical ritual" is un-confessional and therefore un-Lutheran.

I hope the LCMS not be exporting the SMP program to other countries.

Wouldn't it make more sense to move the Fort Wayne Seminary to a country in another continent, such as Argentina or Paraguay, and then send all American seminary students to live and study in that country for four years. It would be a lot cheaper for all involved, and the entire Hispanic community in the USA could become Lutheran!

Couple things, that I think need pointing out.

In fact "the seminary" did not "take a position" it appears this "statement" was not in fact a faculty statement, but written by a few faculty members at the request of the seminary president.

I think the way it is being presented is highly misleading.

I posted this note on the Seminary's blog site and so far, zero response:

I have a few questions for the sake of clarification.

Is this a formal statement from the faculty of Concordia Seminary?

Is this to be considered to be the faculty speaking?

Which faculty members wrote this statement?

This is a helpful overview, but a few observations are in order:

2. "In the section of the Reformation, the seminary that once was home to Dr. Arthur Carl Piepkorn has now decided the rite vocatus includes no reference at all to ordination." For what it's worth, the Kolb-Wengert edition of the BOC (2000) makes the same point about AC XIV (p. 47, n. 81): "Rite vocatus means called in a regular manner by a proper public authority. This is not a matter of 'ritual.' "

3. "The Seminary thinks Greek is nice, good if you have it, but unnecessary." I agree that they're plum wrong on this score.

4. "The Seminary is not worried about the effect of the SMP program on residential seminary education." You mean to say, they aren't just trying to keep their jobs? Even if the SMP were to spell the end of residential seminary (doubtful), I think a more charitable reading of this would be that CSL is more interested in serving the church than saving their hides. In our age of proliferating bureaucracy that serves only itself, I find this laudable.

Thanks for your thoughts.

Here, as in many other places, the ELCA edition of the Book of Concord is entirely and flatly quite wrong.

All one has to do is look at the Roman response to the AC to see that AC XIV was clearly referring to the canonical order of the church for putting men into the office: call and ordination. Rome clearly understood this and the Lutherans did as well, well, until some 20th and 21st century revisionists got a hold of the Augsburg Confession.

Keep in mind the ELCA edition of the Book of Concord that does any number of very, very naughty things with the Lutheran Confessions, such as:

Swapping in gender neutral language here and there, without any correction.

Referring to "crypto-Philippists" rather than "crypto-Calvinists" ... a laughably silly phrase, given that there was nothing "crypto" about the followers of Philip's sympathies, but everything quite "crypto" about their very clear desire to cozy up to Calvin's theology of the Supper.

And we could go on and on.

Oh, yes, and using a text for the Apology of the Augsburg Confession that was NEVER used in an official edition of the Book of Concord.

The only edition of the Book of Concord that has the full imprimatur of The LCMS via its doctrinal review process states, quite accurately, about AC XIV:

"At the time this article was presented it was understood that a minister's first call is publicly ratified and confirmed by means of prayer and the laying on of hands, ordination, a practice that dates back to the time of the apostles. In the Lutheran Confessions "ordination" is a term often used as shorthand for both call and ordination."