Restoring Beauty to the Sanctuary

I have noticed a real buzz going on among Roman Catholics who are restoring a sense of beauty and reverence to older church buildings who were "modernized" in the wake of Vatican II and newer church buildings that took their cues from a religious style sheet that emphasized Soovik's idea of gathering space, functional design, and minimalism with respect to art and adornment.  I spent an evening following link after link in which the rather inconsistent Vatican II alterations of historic buildings were undone and, instead of restoration to what was, a restoration of beauty and liturgical function left it both fresh and timeless.  Then I happened upon a trail of links of modern buildings whose often stark and blank canvas was redone with attention to the liturgical legacy of Roman design and the mass yet was not a repristination of any one past architectural style or form.  Most of them were surprisingly well done.  Check out this example from Texas. 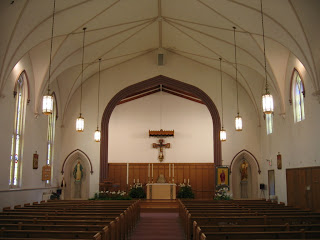 It seems that a number of "rules" were common to the work of such restoration.  I believe that they are equally worthy of Lutheran church buildings (whether old buildings "modernized" or new buildings without much soul for worship). 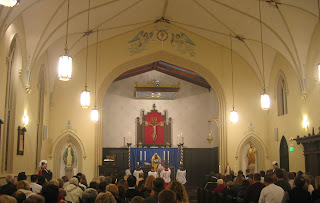 If there are those who think that the money for refurbishing the worship space might be better spent elsewhere, just remember how much is spent on creature comforts in our buildings (heat, A/C, etc.) and think of this as an investment that strengthens identity, purpose, and consequence of who we are as the church of God.
Posted by Pastor Peters at 9:06 AM

Since the altar is the focal point
of the chancel, there needs to be
an altar which invites joyful and
reverent worship.

The altar is not another piece of
church furniture from a catalog. It
needs to radiate the presence of God.
Paraments, Candlesticks with real
candles are accent pieces compared to
the actual construction of the altar
itself. We should not be cheap or
cut corners when considering the
cost of marble, or stone, or even
wood.

I would tend to agree with most of the points made about renovation. Though some might be more difficult than others. Which would be more difficult in a Lutheran church, adding a crucifix or getting rid of the padded pews? I think the padding would be much more difficult to eliminate, though the difference in accoustics would be sifnificant. I definitely agree with the comments on colors. It is a fact you can tell when a church was built, or re-modeled by the colors they use. And once you've got orange pew pads with avacado green carpet and the colors in the stained glass windows were chosen to match them; you have quite a mess.
Fortunately most of the newer church buildings are more plain and utilitarian than badly decorated.
I often see too much light colored woodwork, or worse wood work that does not match, along with an accretion of stands and other items that do not match the rest of the church.
About a year ago I visited a little country church that was the classic wood frame white building with the steeple and a beautiful interior of hand carved wood and tin paneling. Unfortunately someone tried to modernize the chancel by removing the crucifix over the altar along with the panel behind it and replaced it with a stylized modern metal cross. They also replaced the lectern and the pulpit with new rather plain blonde wood versions. It was awful, and most anyone with functioning retinas knows it. The new furnishings in and of themselves aren't bad, just inappropriate for the rest of the building.
I learned quite a bit that day, that regardless of whether the church is of a contemporary design or 130 years old, make sure what you change looks right with everything else.