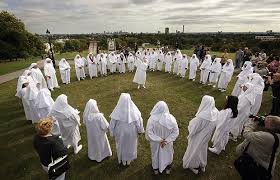 The channels of Christian communication are filled with the buzz about "spiritual" but not religious, with those who have "rejected" traditional church, church music, worship, and dogma, and with a faith that needs to "change" or die.  You cannot avoid the talk.

The result has been a Christianity more akin to the world outside the Church than the legacy and living heritage of old.  Denominations of all stripes have dispensed with once thought essentials of faith and practice in an effort to appeal both to Christians tempted to drop out and non-Christians who might drop in.  The grand tradition of hymn singing has given way to pop music only nominally Christian, that is more for spectator than singer, and that entertains by setting a mood rather than speaking what we believe, confess, and teach.  The liturgy has been made so casual and informal that it is often hard to know who is being worshiped -- God or me.  Vestments have been ditched in favor of a new uniform of polo or tee shirt, khakis or stone washed hole-y jeans, and a edgy hair style and purposeful 5 o'clock shadow on the guys and similar trendy clothes for the worship divas leading the praise.  We talk less about what we believe and more about what we think, less about the Bible and more about the latest self-help gurus, less about God and more about success, happiness, and self-esteem -- because we think this appeals to the folks who are not breaking down the doors to get in.  Never mind that these changes have come at the same time as a steep drop in attendance and church people sneaking out the back doors of nearly every denomination.

Perhaps credit should go to the old Church of England for some honesty in this all.  They are calling their take on this appeal to the unchurched who do not want to be churched a "pagan" mission -- now, get it right, not necessarily a mission to pagans but a mission which looks, acts, and sounds pagan.  The idea here is that Christianity can regain its fervor by becoming less Christian and more pagan.  That ought to please everyone -- especially God.  Read it all here... or here....

Meanwhile some Christians are beginning to say "wait a minute..."  Rome refashioned the Mass after Vatican II and its abuse has created a liturgical mess that now requires a reform of the reform.  Lutherans who were once all on the same page (Common Service) are now all over the page and many outside the books to the point where you never quite know what to expect.  Much of evangelicalism has adopted a common worship format that masks the once erstwhile divisions in theology to make a diverse group seem exactly the same on Sunday morning.  Preaching has devolved from the application of the Scripture and the preaching of the faith to generic pep talks on how to be happy and have better kids, better marriage, better sex, better jobs, better leisure, and better finances.  The best life now has pretty much silenced all talk of a heavenly paradise so far beyond imagination that eye has not seen, ear has not heard, and mind has not imagined what God has prepared for us  -- yet many Christians and their leaders have wondered if selling your soul to the devil will create a stronger, more relevant, and more successful church.

It is not a movement to reinvent the past.  It is not a movement to mirror or mimic yesterday.  It is an honest question of how successful these changes have been and what they have bought us.  Among Lutherans, the Missouri Synod has bled off a significant number but in no way the depth and scope of the loss within the ELCA which has pretty much jumped on every trendy band wagon (from feminism to gay liberation to social advocacy to social justice to the green movement, etc...).  Even if folks feel a little squeamish about sounding a little like their grandparents, they have seen the harvest sown by the seeds of our discontent with a full bodied Christianity and the invention of a Christianity Lite which eschews nearly everything traditional.  The only ones who found a low calorie Christianity attractive are the Christians who were restless for something new and different.  Even these folks shop their faith and are nomads who go from church to church and from new thing to new thing.  We are not adding cards to the deck but merely reshuffling the existing cards into different hands.  The pot remains on the table because we are having more fun playing a game than winning the prize.

Pagans do not need Christianity Lite.  Pagans are not attracted by Christianity Lite.  Pagans, even spiritual ones, are not impressed with a faith that is ashamed or embarrassed by its true identity.  Pagans are not looking for another bible that claims to contain god's words because their bookshelves are already full of them.  But pagans are not fools.  They know whom they see in the mirror.  They feel guilt.  They fear death.  They are tested by despair and disappointment.  They need Church true to her Lord, preaching and teaching which takes seriously the full counsel of the Word of God, an anchored faith deeply rooted in its own history and not adrift on a sea of change.  They need a Church that knows who she is and who her Lord is and can speak this truth without shame or embarrassment.  They will hear once we Christians get out of the way of the message.  We are not called to share our faith but the Gospel, not to speak of ourselves but the Lord who has called us from darkness into His marvelous light, not shouting down our opponents but always ready to give account for the hope within us, and intent upon showing the good works of faith with the good words of the faith.  This would give pagans pause.  If we were smart we might just try it.... clearly we would have the market to ourselves because fewer and fewer Christians are selling this product.
Posted by Pastor Peters at 6:00 AM

Preach it, Father, preach it!

"Lutherans who were once all on the same page (Common Service) are now all over the page and many outside the books to the point where you never quite know what to expect." . Sounds like Grace Lutheran to a visitor.

I hear that the LINO (Lutheran In Name Only) church also known as the ELCA has now surpassed the Episcopal church in the speed in which it is losing members.

David Hume, the philosopher who still guides so many today was once seen to George Whitfield preach. Someone said, "I thought you don't believe all this." His response was, "I don't, but he does."

Unbelievers don't want music, talks, conversations, entertainments sub-standard to what they can find in the world. The only people impressed by all of it are the ones who think they are being relevant and edgy.

@ Anonymus: I'm so sorry you are bitter. I'm sorry you don't feel comfortable at Grace. Please consider taking into account that we aren't all over the page as I believe Fr. Peters intended it. We might not follow LSB or TLH, but the divine service at Grace is unmistakeable. We're definitely not the happy clappy pseudo-evangelicalism that has infected many LCMS churches. Suffice it to say that there are at least two former evangelicals who might now be agnostics if there were not a church body worshipping like Grace in our area.

What ordo or rite do you follow there? At our Grace, we use LSB...

We follow what Pastor Peters writes as his version of Lutheran Service, including his own version of the creeds, preparation for the Lord's Supper and praying for Bishops.

Oh no, praying for bishops definitely goes way too far because they are SO not in need of anyone's prayers, especially the Church's.

@Anonymous: I find it hard to believe that he "writes his own service" and "his own version of creeds," with all that he writes here on this website. That is a serious and amazing accusation. I really encourage you to talk to him about this.

I really would like to know more, and know specifics.

Apparently, anonymous has a couple dozen axes to grind.

The deviations that Pastor Peters uses from the printed page of LSB have been well published here on this blog. You can look back and see them for yourself. Whether or not you agree with them, you are being disingenuous to say he "writes his own". He has reason for them and if you do not agree that is your right but he does not make these things up from thin air. I think that anonymous needs to be more careful in his or her words.

Somebody has it in for Padre Peters.

As I make my way to church this morning, I will endure the praise band on the side, the innumerable praise choruses without substance, and a service that seems made up on the spot sometimes. It is the only LCMS congregation within driving distance.

Hey anonymous. Come and walk in my shoes. I try to be faithful and charitable in my support of this church but it stretches the limits of my patience nearly every week.

Yea, I am sure your pastor has his faults but I would trade what I have for him any day of the week. Nearly every week I follow his sermon or others published on blogs because the sermon I get is the word of God light or little word at all.

How thin is your skin and what would you do if you were in my place? Thank God you are not.

Sometime Visitor said, "The deviations that Pastor Peters uses from the printed page of LSB have been well published here on this blog."

Can you point me to those posts?

This is out of curiosity and professional interest, as my parish would be ameniable to historic practices that we have lost in the LCMS and American Lutheranism.