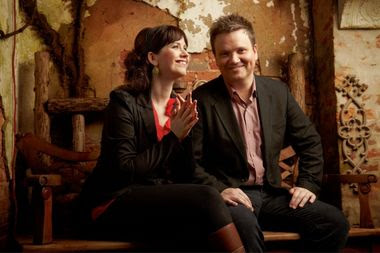 There's no definition for what's a hymn and not a praise song. But Keith Getty says it should be singable without a band and easy for anyone sitting in the pews to pick up. And it should say something bold.  "I think it's to the church's poverty that the average worship song now has so few words, so little truth," he says. "[It] is so focused on several commercial aspects of God, like the fact that he loves our praises."  Kristyn Getty says that some of the most popular music doesn't show God the proper reverence.  "There is an unhelpful, casual sense that comes with some of the more contemporary music," she says. "It's not how I would talk to God."

In case you missed it, Keith Getty is the responsible for what is rapidly becoming one of the most popular contemporary songs used in worship -- In Christ Alone"  --  and Kristyn Getty (his wife) is more often than not the voice that introduces these new worship songs to the congregation.

No less a medium attuned to the national pulse than NPR picked up and delivered this story.  You can read it all here.  The point of this that the popular style of contemporary worship music, with its emphasis on rhythm and sound and its characteristic 7 word lyric is meeting a challenge in the praise band and praise song congregational setting.  You might expect it to come from "traditional" worship advocates but, in this case, the words of warning about the theological vacuity and the shallowness of a musical form that relies on sound rather than text has come from one of the most prominent writers of contemporary worship music.

While I am no fan of contemporary praise music, I have to admit that the content of this song is certainly meatier than most of the genre.  I can only hope that this is the start of a revolution away from spectator church music in which the focus is on the performer(s) and from the typical trite, shallow, and casual nature of contemporary praise music designed for people to actually sing.  But... I have been disappointed before...
Posted by Pastor Peters at 6:00 AM

Ugh! I could not listen to all of it. Give me something like St. Patrick's Breastplate, Ein Feste Burg, or any thing from Bach, Tallis, Byrd, Cruger, Palestrina, etc.

Not a big fan of this one...especially the music and in a church setting. I'm the organist and our pastor picked this one up for us to sing. It sounded pretty crappy on the pipe organ. You could tell it was meant for a contempo setting. Can't deal with the "breathy" lovey dovey tone voice used to sing this on various youtube videos.
Sure the congregation "got it" and was singing, but it sounded really awkward and out of place during the service which seemed to interrupt the flow. You can have great words, but if the setting isn't right--it can also be a distraction in the service. For me, it just didn't fit right. There are better choices.

IS BAPTISM JUST AN ACT OF OBEDIENCE?

The prevailing view among faith only advocates is that water baptism is just an "act of obedience" and is not a prerequisite for salvation.

Acts 5:32 We are witnesses of these things; and so is the Holy Spirit, whom God has given to those who obey Him.

It is apparent that by obeying God we receive the Holy Spirit. Obedience to God is more than just an unrewarded act.

Hebrews 5:8-9 Although He was a Son, He learned obedience from the things which He suffered. 9 And having been made perfect, He became to all those who obey Him the source of eternal salvation.

Jesus is the source of salvation to all who obey Him. What did Jesus say? He said, "He who has believed and has been baptized shall be saved.....(Mark 16:16)

Baptism is not just an act of obedience. It is a prerequisite for salvation.

Hebrews 11:7......became an heir of the righteousness which is according to faith.

Noah became an heir of righteousness after he obeyed God. FAITH+OBEDIENCE.

Hebrews 11:30 By faith the walls of Jericho fell down after they had been encircled for seven days.

The walls did not fall down by faith only, they fell down after seven days of obedience. FAITH+OBEDIENCE.

The Scriptures do NOT teach that water baptism is just an act of obedience.

THERE IS NO SCRIPTURE THAT STATES MEN ARE SAVE BY "FAITH ALONE."