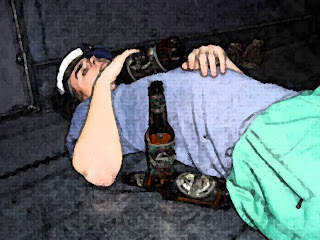 While listening to some Anglicans discussing the Archbishop of Canterbury describing the Anglican Church as a drunk wavering on the edge of a precipice, it occurred to me that there is much in this analogy and not for Anglicans only.

The Anglicans discussing this were saying that unlike the college kid on spring break who awakens from his drunken stupor with a tattoo and a social disease, Anglicans are hard core drunks -- the kind you find sleeping it off in alleys and under an overpass.  They awaken not to sober reality but to pursue more of the stuff that numbs the pain and clouds the mind.  So Anglicans, as these Anglicans said, are the hard core drunks who have abandoned doctrine and faith and have only a stuffy liturgical formality and a desire for social justice left. Anglicans seem not to know who they are anymore.  They have been drunk too long.  They will probably not fall over the edge because they have done it already.  Instead the worst that can happen is that they remain drunk, oblivious to their past and without regard to their future.

I am not sure about this judgment -- merely repeating the conversation.  What I did find appealing is this image of the college kid who wakes up from his spring break bender.  It occurs to me that many within the ELCA, as well as some of those in the NALC and LCMC, think of the CWA 2009 embrace of gays and lesbians in the same way the college kid wakes up to find the evidence of his drunken all nighter.  Yes they have the tattoo and yes they have the social disease but... the folks hope that they can get over it and go back to normal.  The NALC and LCMC folks yearn more for an ELCA like it was than for something very different.  Those remaining in the ELCA hope that they can put their spring break (or in this case, August Indulgence) behind them and things can get back to some sense of normal -- without the conflict or the preoccupation with what was done in 2009.

The ELCA is, however, a long term, hard core drunk when it comes to its rejection of Biblical authority, its skepticism about Biblical fact, and its love affair with mainline Protestantism.  This is not some flirtation or week end bender.  It is an addiction that has stripped away the Lutheran identity and left them with but a memory of their Lutheran past and a difficulty with an unchanging truth. The ELCA needs real help and must begin by confessing they are drunks when it comes to reconciled diversity, progressive Protestant liberalism, and doubts about Biblical truth and authority.  Sobriety requires you to face the full measure of your pain and, while I hope it could happen, I am not holding my breath to await the result. 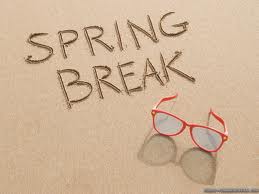 On the other hand, we in Missouri are hard core drunks when it comes to the church growth movement, to contemporary worship, and to mission strategies that require us to hide our Lutheran identity and appear to some body we are not.  This is no passing flirtation.  This is no spring break dalliance.  This is a hard core addiction to non-sacramental worship, seeker style services, praise music, and the illusion of success defined by numbers. Like the Anglicans and ELCA, such a hard core addiction will require more than a visit to the doctor.  We need to enter rehab in order to remember who we are so that we can be who we are on Sunday morning.  We will never outgrow our temptation by these things but we can learn again the painful but necessary track of sobriety.

I am happy to say the only tattoo I have is the one God put on my forehead at my Baptism.

I missed the particular comments from ++Welby that you have discussed here today. I don't usually pay much attention to what he says; it is usually incoherent and foolish.

I would like to point out to all readers that the Archbishop of Canterbury no longer speaks for the majority of Anglicans world wide. He speaks for the CoE, the American ECUSA, the Anglican Church of Canada, and not very much more (probably should include New Zealand in there as well). Most of the rest of Anglicanism, which includes the US, Africa, India, and SE Asia, think that he, and all his buddies, are apostate. He is best ignored.

This is a sad thing to say, because historically, the Archbishop of Canterbury was the head of the entire Anglican Communion. But with apostasy comes loss of position, and that is now well established.

The ELCA has aids.

The LCMC and the NALC have incurable syphilis.

The LCMS has a curable STD, but it refuses to abstain from its risky behavior and get treatment.

There is no hope for the ELCA and its splinter groups. Are there any signs that Missouri is changing? How about at the district level?

I and my family attend a liturgical LCMS church. However, our church does not have an elementary school, so our children attend school at another LCMS church.

We recently attended the Divine Service in this church to see our children sing. As we walked into the church, a praise band with electric guitar, drum set and backup singers was belting out the latest Christian "hit". A large projection screen was in the place of the cross/crucifix, and the pastor was in street clothes.

I said to myself, "I left the emotional and spiritual roller coaster of Evangelicalism for this?"

"The LCMS has a curable STD, but it refuses to abstain from its risky behavior and get treatment."

Based on its latest public admission, the LCMS is behaving similarly to the openly homosexual youth whose membership in the BSA, the LCMS SP, on behalf of the Synod, agreed to respect.

The 1989 conference was made when Seminary enrollments were at a low, hence the lay deacon and SMP programs came out of it. I am not a fan of these programs, but to equate our problems with the ELCA is way over the top.

Most LCMS pastors are brainwashed into thinking that the "young people" between the ages of 18-34 will be turned off by traditional hymns and the liturgy and never join the church. Sad, but true. Such LCMS pastors do not get out much.

If LCMS pastors were to sneak into the Sunday services of Evangelical churches and then instantly picture themselves as those Evangelical preachers, they would realize the stupidity of their behavior, return to their congregations, and reintroduce the hymnal.

The LCMS should not rely on the Boy Scouts to remain "good" forever. It should covertly expand the mission of Higher Things *before* the BSA evolves into a more "gay friendly" organization. The BSA will become an advocate of "social justice." It is only a matter of time.

What is wrong with the LCMS?

The LCMS/BSA Memorandum of Understanding was not approved by the delegates at the synodical convention. In fact an overture opposed to the BSA decision, which could have been discussed, amended, and voted on (for or against), was derailed by the floor committee.

The signing of the MOU is just another example of the SP tapdancing to the Newtown Flip-Flop.