What do you really think about it.... 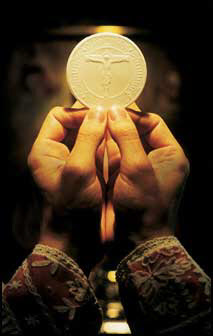 Perhaps the most honest expression of what we believe about the Lord's Supper comes from the way we treat the reliquae (that which remains after the distribution).  For what we truly believe is often hidden in the way we handle the things of God when no one is looking, when the Divine Service is over, and we are left alone with our consciences.

On the other hand, there are those who were catechized correctly but who fail to draw a connection between what is believed and confessed and what is practiced on Sunday morning.  They would refuse any adoration to Christ in the bread and cup.  They have trouble locating Christ to the means of grace upon which He has placed His promise.  It is a theoretical real presence.  They find it hard to understand why reverence would be shown to the bread He calls His flesh and the cup of His blood.  You find evidence of this when the individual plastic cups used in the distribution are tossed into little garbage cans by the rail after communing -- as if these were mere trash.  Catechesis has failed to intersect faithful practice.

I have personally watched in horror as Lutheran Pastors have poured the remains of the chalice after the service into the vestry toilet and flushed away.  I have heard horror stories of folks who have taken home the remains of the flagon or cruet to use as wine with Sunday dinner.  I have heard so many, many times when the consecrated is poured back into the consecrated and the bread the same, as if the Word meant nothing at all.

Our practice here is relatively clear.
If you are interested further, I would suggest you might survey the monumental work of Edward F. Peters on Luther and the Principle that Apart from the Use there Is No Sacrament.  It is available from the Seminary library at St. Louis or Ft. Wayne (it was once available in Sem printshop version from the Ft. Wayne bookstore).  Check out the current altar guild manuals published by CPH.  You might also want to read
Bjarne Teigen's work The Lord's Supper in the Theology of Martin Chemnitz.

The Lord's gifts to us are never trash -- not even when we esteem them wrongly!  Why is it that we treat certain things with great respect (the American flag, for example) and then think it matters not how we treat the reliquae after the Divine Service or the elements during that service?

I remember once when a small spill of the chalice happened during the distribution.  Instinctively I got down on my knees and cleansed what had slipped with the linen purificator.  In the process it became quite dirty.  It happened during the distribution and my action was unmistakable to those at the rail and to most of the congregation.  After the service one who had been at the rail when this happened spoke to me with tears in her eyes about the profound character of this instinctive act and how it encouraged her to see this devotion.  Another who had also seen it from the vantage point of the rail wondered first of all why I bothered, why I took up time in the service to do this, and why I ended up ruining an expensive linen napkin to clean it up -- paper towel would have done well enough.  Go figure.  Let me say it again.  The Lord's gifts to us are never trash -- not even when we esteem them wrongly!
Posted by Pastor Peters at 6:00 AM

The truth is in between. Honor to Christ Jesus should neither cause us to fear, or ignore.

Growing up Baptist, there was, of course a belief in the real absence. We were taught those who believed in the real presence were superstitious, and misled. Now, I know the truth, and just how LOW a view of our Lord's Supper that is.

To clarify: The low view of the supper belongs to those who DON'T believe there is anything there besides a little "cracker" and some grape juice.

Anglican practice in my parish is similar to your, with a few significant differences.

We use only the common cup, so there are no individual glasses to be dealt with. After the distribution, any of the precious Blood that remains is consumed, either by the celebrant or the deacon. Only consecrated hosts are reserved for sick communions.

We do not ever consecrate the cruet, only that which is in the chalice. (There may, in some circumstances be a need for more than one chalice.)

Thank you for discussing this important information. It will help in the understanding of the Real Presence.

I have had this conversation with Lutheran friends for many years. You say that Lutherans do not regard the Lord's gift as trash. Unfortunately, I have seen unused consecrated wine just thrown in the sink (the kitchen sink; not a special drain so it remains on holy ground); i have seen individual cups put in trash bags (some of the filled with a good amount of our Lord's blood); I have seen wafers on the ground and stomped on (not intentionally, but it could have been avoided). You may well have a reverence for the gifts of our Lord, but I have seen too many times with my own eyes the lack of even basic respect for the Lord's gift by Lutheran congregants. I dont know how much of that was due to poor catechesis or just the anti-Roman knee-jerk reaction to prevent adoration--chris

Reading this makes me wonder what the policy is at my own Lutheran church... I am going to find out! Great post.

Nice article... I might add that, at least for LCMS pastors reading this, the Peters article you referenced appeared in the November 1971 edition of Concordia Theological Monthly. Both seminaries'libraries offer free access to their alums to their ATLAS databases. I was able to get to the aforementioned article using this method.

The Peters summary first appeared in Una Sancta in the late 1960s and may indeed have been reprinted in CTM but the thesis is hundreds of pages long and has not been published except to be reprinted as it was submitted to Concordia Seminary, St. Louis, but by the Seminary Print Shop of Concordia Theological Seminary, Fort Wayne.