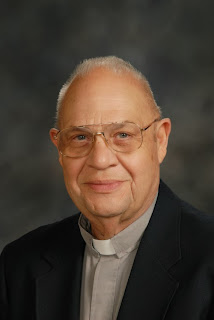 Sermon preached for the Memorial Service for the Rev. William M. Childress, October 1, 2013.

A dozen years ago I got an email and then a visit from Bill and Carol Childress.  They were looking at possible sites to retire and they came to interview me and Grace Lutheran Church.  It did not hurt that they had a son, daughter-in-law, and grandchildren in Nashville.  But they were looking for a Lutheran Church that had Lutheran worship.  It did not take long before a home was purchased and, as we kidded Bill, Carol became a Stepford wife.  It took even less time for both Bill and Carol to become an intricate part of the family of God that is Grace Lutheran Church.  Very soon after unpacking we worked on an arrangement whereby Bill might become Pastoral Assistant at Grace Lutheran Church, a position he held until his death.

Very soon, Bill became not only my parishioner and a fellow staff member, but a confidant and friend.  I cannot count the number of conversations, the times in which we sounded each other out on this or that, and the counsel he provided through what would be a couple of trying events in the life of our congregation.  He will not be soon forgotten by the people here or by me and my family and I say this out of the deepest affection for Bill.

He heard the call of the Lord early but did not get to Seminary until a little later in life.  By then he had a wife and family who accompanied him to the bourgeoning city of Springfield, Illinois, and the big seminary house that was home for a time.  He served from Iowa to Arkansas, from Missouri to Kansas, from Louisiana to Tennessee.  A faithful servant of the Lord as well as husband and father and grandfather.

If you knew Bill you knew him as someone who was, shall we say, careful with the dollar.  He was a founding father of the group affectionately and truthfully known as the Curmudgeons of Grace Lutheran Church and his office here was their customary meeting place, Wednesdays from about 8:30 am on.  I bought the coffee but it was always Bill's group and he leaned back on his chair to lead the complaints about the news, politics, taxes, and other changes thought to bode ill.

If you knew Bill, you also knew him as a pipe smoker, a lover of dachshunds, husband of Carol for more than 54 years, father to Brad and Bill, and grandpa to Billy, Michael, Kyle, and Emma.  I expect that we could all spend some time telling the stories of a man whose life offered many twists and turns and who cast a long shadow over his family, his friends, and his church.  Just to prod the conversations later, you might be surprised to know that among his other pursuits, Bill was a disk jockey over a Paducah radio station, spinning the sound of the rock and roll into the airwaves.

But I want to draw your attention to another side of Bill.  This is William Martin Childress, named in the waters of his baptism as a child of God, one set apart by the Lord to be His own.  This Bill was a square shooter Lutheran, whose heart was in the old, old hymnal, and who judged all things Christian through the lens of Law and Gospel.  Some in our congregation have assumed that the version of A Mighty Fortress we sang was always my choice and the complainers always told me to pick the other version.  But not Bill.
He and my wife complained much more loudly whenever we sang the Bach setting instead of this rhythmic setting which is Luther's original.  For Bill, a new hymnal was okay but the 1941 version was the top of the heap, still waiting to be dethroned.

In this day and age when Lutheranism is so easily painted by the brush of personal preference, Bill preferred to hear the Law straight up and the Gospel in all its sweetness, without softening the Law or diluting the message of Christ and Him crucified.  And that is exactly how it ought to be.  For it matters little whether we find the truth of God hard or unpleasant to our ears.  It matters only if we hear it – listen to the Word, believe it, repent because of it, and rejoice in its promise of life and salvation through the cross.

That is exactly how it was on the day Bill died.  The Law straight up and the Gospel undiluted.  I gave Carol and Bill Holy Communion that morning.  We began with the words of the old hymnal.  Beloved in the Lord, let us draw near with a true heart and confess our sins unto God, our Father, beseeching Him in the name of our Lord Jesus Christ to grant us forgiveness.  After speaking the confession whose words do not mince the hard sound of truth with its admission "I, a poor miserable sinner..." I asked Bill.  Do you humbly acknowledge and heartily lament your sins?  He said "I do."  Do you believe that God your merciful father, for the sake of Jesus Christ, your Savior, has pardoned all your offenses?   He said, "I do believe."  And then with the absolution I forgave his sins in the name of the Father and of the Son and of the Holy Spirit.  I think we all knew this would probably be Bill's last communion but none wanted to say it.

Then just before six in the evening, when his breathing began to slow, I whispered in his ear the Apostles Creed, prayed the Our Father, said the 23rd Psalm, and repeated the final stanza of Martin Schalling's wonderful hymn: Lord, Thee I Love with All My Heart.
Lord, let at last Thine angels come,
To Abram's bosom bear me home,
That I may die unfearing;
And in its narrow chamber keep
My body safe in peaceful sleep
Until Thy reappearing.
And then from death awaken me
That these mine eyes with joy may see,
O Son of God, Thy glorious face,
My Savior and my Fount of grace,
Lord Jesus Christ, My prayer attend, my prayer attend,
And I will praise Thee without end.

And the angels came and brought him from the shadow of death to the light of everlasting life in the presence of our eternal Lord, finishing the good work begun in him when he was baptized.

The life of the Christian is a journey.  Its beginning rests with the grace of God who uses water to bestow upon us the life our Lord won by His suffering, death, and resurrection.  Our lives are sustained on that journey by the means of grace in the Word of God preached, the voice of absolution, and the food of Christ's body and blood in the Holy Communion.  And at the end of our lives, we rest on the sure and certain hope of eternal life which our Lord has given to us.  Our lives are a journey lived out from God, in Christ by the power of the Spirit, and to God through Christ.

For Bill it never grew old.  The Law reminding us we are never without the need of Christ.  The Gospel reminding us that we are saved by grace through faith alone.  It never grew old, even when in the last day of his life, Bill was asked "are you a sinner" and "do you believe Christ died for you?"  It is this which is his most profound and lasting legacy to us.  The Law and the Gospel.  They never grow old.  The Law to convict our proud and self-centered hearts. The Gospel to rescue and redeem us from even our very selves with the blood of Christ.

Carol, Bill, Brad and Lynne, Billy, Michael, Kyle, and Emma... and all who knew him and loved him: remember what Bill could not forget.  We stand before God through the merits of Christ alone, clothed in the righteousness of Christ alone, set apart by God for the holy and high calling of our daily Christian lives, with the seal and promise of eternity in Christ alone.  Of all that we might value in the life of this man, his greatest treasure was always the Word of the Lord, preached straight up, the Law with its full force convicting, the Gospel of Christ's death and resurrection undiluted, full strength, rescuing, restoring, and redeeming. It never grows old. It is always the center and foundation of a well lived life.  Whatever tempts you or tries you, whatever distracts or disappoints you, whatever saddens or sorrows you, you child of God, rejoice in this.  That your name is written in the Book of Life.  Amen.
Posted by Pastor Peters at 6:00 AM

This is the kind of Christian we should all strive to be. It sounds to me as though he had a clear understanding of the Gospel and a strong faith. He is secure with Jesus now.

Pastor, I also want to thank you for your efforts to help this man reach a peaceful and holy death. This is what we all hope for, but only a very few actually receive. Death today rarely happens in such good circumstances, and with such support. I wish that all faithful Christians might have such a death, including myself.