One does not preclude the other. . . 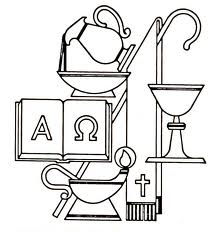 This does not mean that Lutherans have not attempted to have deacons and deaconesses -- even in those jurisdictions in which the three-fold expression of that one Pastoral Office is not present (for example, outside of Sweden).  This is messier than the relationship between Pastors in parishes and Pastors serving in positions who exercise episcopal responsibility but, despite the mess, it is something we need to work through.

My point is simply that it is fully possible to have the historic three-fold pattern of  bishop, priest, and deacon without disavowing the central unity of the Pastoral Office.  We need not make it an all or nothing choice.  A fully developed diaconal office as a terminal office (not merely a stop toward the destination of ordination as a Pastor), assigned specific duties, and given limited, specific authority, need not detract from nor conflict with our Lutheran emphasis on the unity of the Pastoral Office.  Ordination or consecration and call procedures to support this office can also be developed.  Perhaps the most consistent practice of our theology is to eliminate the plethora of offices under the unfortunate heading of "commissioned ministers of religion" and assign them all as deacons with designated responsibilities under the supervision of the Pastor, reporting to the congregation or calling agency through the supervising Pastor.

There are many in Missouri who bristle at the idea of calling a man bishop.  Some reflect hesitance that flows from Missouri's early history and some have an instinctive, knee-jerk reaction to anything that might remotely smack of a hierarchical structure.  Whether we call the man bishop or not, episcopal oversight has always been practiced in Missouri and has been key to our own structure.  From the Circuit Visitor to the District President to the Synod President, we have always understood visitation, supervision of doctrine and practice, and the maintenance of rosters of workers and congregations as integral to our Synod self-understanding.  The recent convention of Missouri reflects that return to visitation and a more direct role of supervision that waned from the late 1950s or early 1960s to the present day.  It is not something new or strange or different.  We are recovering an element of our structure and life together that got lost due to a combination of rapid growth, theological dispute, breakdown of trust, and a cultural rebellion against authority in general.  Our retreat to a congregationalism not envisioned by our Synodical forefathers has not served us well at all.

Now is high time to rediscover the shape of our life together in which we are not isolated and individualized components only loosely connected to each other or the whole that is the Lutheran Church-Missouri Synod.  This is no "top-down" hierarchical overreach but the recovery of what we had and lost.  We are accountable and responsible to each other.  To assign certain Pastors within the Synod the episcopal responsibility of visitation, supervision of doctrine and practice, and administration of the rosters does not vitiate the essential unity of the Office of Pastor.  To "ordain" these Pastors into this distinct responsibility does not diminish nor does it contradict this essential unity of the one Office.

In the very same way, it is high time for the various licensed lay deacon programs to be reviewed, organized, and ordered to prevent the blurring of the responsibilities and the confusion over what a deacon is and what a deacon may do.  If for no other reason than for the good of the whole, Districts need to come together and work with the theologians of our church body to fix what is clearly broken.  To have deacons set apart for this office, with responsibilities that neither mirror not detract from the Pastoral Office, does not diminish nor does it contradict what we have said about the Pastoral Office.

I possess neither the theological acumen nor the pastoral wisdom to do this but I have every confidence in the Seminaries and the Praesidium of the Synod in consultation with the Council of Presidents, acting in good will, for the sake of the Church, to figure out how this would look, act, and work.  Both represent a crying need which, if left to the status quo, will only foment more problems and crises for the LCMS.  It is high time for us to figure out how to do both -- fix the mess our lack of visitation and supervision of doctrine and practice has created and fix the mess our various lay deacon programs have created.
Posted by Pastor Peters at 6:00 AM

I have never understood why Lutherans do not have an ordained deaconate. It seems clear to me from the Book of the Acts of the Apostles that men were set apart for such duties with the laying on of hands in order that the others might focus on preaching and teaching. Is the laying on of hands mentioned here not a sign of ordination for Lutherans?

"Our retreat to a congregationalism not envisioned by our Synodical forefathers has not served us well at all."

Successful church bodies close and/or merge rural and inner-city congregations that each have less than 40 people as members. The Roman Catholic church is an example of a church body that has no problem merging congregations. The neighborhood church is dead. Long live the regional congregation. Who within the LCMS has the power and the authority to merge and relocate congregations?

There are fewer people living in remote rural areas, which means fewer prospective members in order to grow the congregation. Most rural congregations need to be merged. Due to inaction, the congregation will die a slow death and the pastor will go on CRM status.

In the inner city, evangelism efforts to convert declining Lutheran congregations into congregations dominated by the Blacks or Hispanics living in those neighborhoods has largely failed. The congregation should have moved with the bulk of their parishioners into the suburbs. Due to inaction, the congregation will die a slow death and the pastor will go on CRM status.

Look at the LCMS conventions. How many people of color did you see. The LCMS needs to import and ordain Mekane Yesus pastors, and then send them into the inner cities in order to save urban Lutheranism. Sorry, but a well-intentioned farm boy will not resonate with minorities.

As an aside, ever notice that the most successful church bodies strategically place their churches in the wealthier suburbs. Could you imagine Rick Warren, Andy Stanley, Ed Young Jr, or Bill Hybels planting an inner city or rural congregation. Ain't gonna happen.