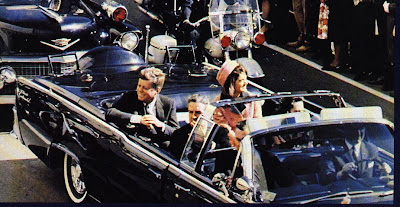 All people my age and older can remember exactly where they were when the news came that President John Fitzgerald Kennedy had been shot and killed in Dallas.  Like my parents who remember the sound of the Sunday, December 7, 1941, report of the attack on Pearl Harbor, people my age cannot forget November 22, 1963, and how their lives were forever changed by those events.  I also remember September 11, 2001, but that memory is completely different.  I do not hear anything in that memory -- only the visual image of the smoke, the wounded towers of the World Trade Center, and the buildings collapsing into rubble.

It is funny but the memory of what I heard is distinctly more powerful than the image of what I saw -- though, to be sure, both memories are deep and profound.  It makes me wonder about the significance of memory and whether or not the memories of what we hear are different from what we see.  Could it be that my generation was the bridge between memories almost exclusively audible and memories almost exclusively visual?  Could it be that hearing and seeing are different kinds of memory?

Faith comes by hearing, says St. Paul to the Romans.  Perhaps the Lord knows what I merely wonder about and has purposefully left His Church with a Word, an embodied Word in Christ but still a Word, to call forth faith, to impart the Holy Spirit, to bestow rich treasure and blessing, to comfort and encourage the faithful, to warn and caution the faithful when they wander, to deliver forgiveness, and to bring to the world the witness of Him who is the Word made flesh, whose glory we have seen, known, and now share.  It is funny thing how remembering November 22, 1963, can raise a question about how we remember things.  I find it curious also that as I recall November 22, 1963, the sound of Walter Cronkite, and the terrible news of the President's murder, my mind also recalls hearing his voice -- the voice of a man on his inauguration whose oratory called a nation and its children to anticipate their great future and to pool their energy and effort to achieving that future.  One more example of an auditory memory so vivid that it supplants the visual memories which are supposed to be more powerful.  What does that say about the power of the spoken Word?
Posted by Pastor Peters at 6:00 AM

Thank you for this - it gives me something to thinking deeply on. Also to share with a friend who is trying to convince her daughter, married with a 3 year old, to start going to church. She's using fire and brimstone to convince her, which is NOT working. I'll remind her Faith comes by Hearing. A different approach.