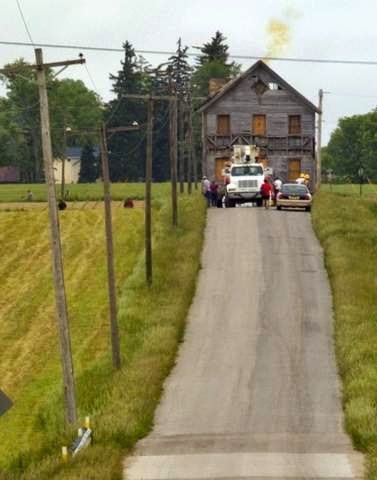 The Friends of Wyneken will hold their first public open house at the 1850s-era home once lived in by the Rev. Friedrich C.D. Wyneken, a pioneer in what is now the Lutheran Church-Missouri Synod denomination.  For information or to donate, go to www.friendsofwyneken.org

By Kevin Kilbane of The News-Sentinel [Fort Wayne, IN}

The first public open house at the Wyneken House will allow visitors this weekend to tour what may be the sole remaining structure with a link to one of the pioneers of the Lutheran Church-Missouri Synod (LCMS) denomination.

"It is still under construction, but that is part of the reason we want to do this," said Ken Selking, chairman of Friends of Wyneken. The group, a subcommittee of the Indiana German Heritage Society, formed in 2004 to save the house from demolition and transform it into an interpretive center.

Visitors tour the house to see how much work has been done and how much still needs to be completed, Selking said.

Built about 1850, the wood-frame home served as the residence of the Rev. Friedrich Conrad Dietrich Wyneken and his wife, Sophie, from 1859 to between 1860-1862.

The German-born clergyman came to this area in 1838 from Germany to minister to German Lutherans on the American frontier, Selking said. He is credited with helping found or nurture a number of Lutheran churches in Indiana, Ohio and Michigan, as well as helping to start Concordia Theological Seminary in Fort Wayne.

Wyneken, who died in 1876, also served two terms from 1850 to 1864 as president of what is now the LCMS, which means the house briefly served as the denomination's headquarters while he lived in it.

The house originally stood on Adams County Road 1000N in the northwest part of that county. The Friends of Wyneken raised money to move the home in 2005 to member Dona Schaefer's farm on Winchester Road near the Adams-Allen county line.

Schaefer later donated 3 acres of land to give the house a permanent home, Selking said.

Major donations from Paul and Carolyn Wolf have helped significantly with the cost of repair work on the house, he added.

Selking estimates the Friends group has invested more than $200,000 so far in moving the house and making repairs. But he's excited about the progress.

Much of the house's exterior siding was in bad shape and has been replaced, he said. While the home stood vacant for possibly 50 years, people removed the front porch and took out most of the oak flooring and floor joists. The porch and flooring now have been replaced.

Workers rebuilt all of the home's windows, using as much of the original windows as possible, Selking said.

In the past few weeks, workers finished building the kitchen that once was attached to the side of the house, and they now are finishing the back porch, he said. The only other exterior work left involves placing a brick veneer on the exposed walls of the walk-out basement.

Inside, the house still needs a lot of work, Selking said. Portions of its plaster walls are missing. The Friends group also needs to install a water well, heating and cooling systems, and full electric service.

When completed, Selking said the house will serve as an interpretive center focusing on four areas: Germans' migration to America in the 1800s, Wyneken and his significance in the Lutheran faith, the house as a pre-Civil War structure, and how people lived in the mid-1800s.

The basement will have modern amenities, as well as displays and space for lectures, Selking said. The home's two upper floors will be returned, as much as possible, to how they would have looked in the 1850s.

How quickly the group reach those goals depends on the money they receive.

"We live and die on donations, plus the fundraisers we do," he said.
Posted by Pastor Peters at 6:00 AM