Perhaps the President most unfriendly to the freedom of religion in America. . . 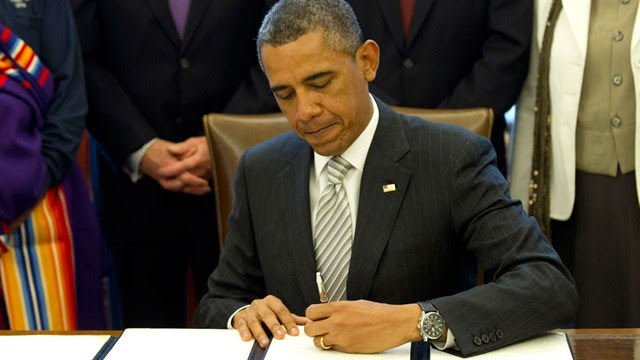 The executive order amends a 1965 order prohibiting some forms of discrimination by federal contractors. The old text forbade contractors from discriminating "against any employee or applicant for employment because of race, color, religion, sex, or national origin." Obama's revision adds "sexual orientation" and "gender identity" between "sex" and "national origin."

Many religious organizations, such as World Vision, World Relief, and Catholic Charities partner with the federal government, but often receive grants, not contracts, so are not affected by the order, said Stanley Carlson-Thies, director of the Institutional Religious Freedom Alliance.

"Several federal courts have held that this language, incorporated from elsewhere in antidiscrimination law, allows religious organizations to have standards concerning employees' conduct if those moral standards stem from the organization's religious beliefs," Berg said.

These past orders add up to a patchwork of protection for religious organizations, said Douglas Laycock, a professor of law and religious studies at the University of Virginia.

"And very important, [the] executive order creates no right for anyone to sue anyone else. So gay rights groups cannot organize litigation against religious contactors," he said. "Only the contracting agencies can enforce this order, and they may quietly enforce it with attention to religious liberty—which is what this administration has mostly done so far."  However, that may not always be the case, said Jenny Yang, vice president of advocacy and policy for World Relief, a federal grantee.

Hidden in the generalities is the situation of Gordon College, a respected Christian institution, which has been thrust into the fray for requesting a religious exemption from the president’s executive order prohibiting any one doing business with the government to discriminate on the basis of sexual orientation.  It is of note that the Hobby Lobby religious exemption for Obamacare contraception coverage explicitly declared that the ruling did not apply in cases of discrimination.  The next great issue of religious liberty issue may well be the situation of Gordon College.

This represents the continuing quest of the Obama Administration to reduce the constitution freedom of religion to a mere freedom to worship and this require that every other aspect of any religious organization or church conform to all federal restrictions, regulations, executive orders, and laws without regard to their status as religious organizations.

Either this President is the most unfriendly resident of the Oval Office to the freedom of religion in America or else he is determined to make all religious organizations subservient to his own views.  This action is a dangerous precedent for the narrowing of the right guaranteed under the Bill of Rights and could be the signal for more retraining of the rights of churches and Christians to live by their faith freely and unencumbered by federal regulation or requirement.
Posted by Pastor Peters at 6:00 AM

"This represents the continuing quest of the Obama Administration to reduce the constitution freedom of religion to a mere freedom to worship and this require that every other aspect of any religious organization or church conform to all federal restrictions, regulations, executive orders, and laws without regard to their status as religious organizations."

Still waiting for any Lutheran pastors to offer imprecatory prayers to God to rain destruction down on the wickedness of the murdering, traitorous Obama and his regime of thugs.

Oops. But that might upset any demonicrat supporters sitting in the pews, or on the board of elders, or in District or Synodical offices.

Martin Luther referred to imprecatory prayers when he noted, "We should pray that our enemies be converted and become our friends and, if not, that their doing and designing be bound to fail and have no success and that their persons perish rather than the Gospel and the kingdom of Christ" (Luther’s Works, V 21, CPH, 1956, 1000).

In “On War Against the Turk” Luther gave an example: “But as the pope is Antichrist, so the Turk is the very devil. The prayer of Christendom is against both. Both shall go down to hell, even though it may take the Last Day to send them there; and I hope it will not be long.”

I predict many religious organizations and churches headquartered in the US will have to
be moving soon...

In his Large Catechism, Part III. 68-70, Martin Luther’s explanation of the Third Petition, “Thy will be done on earth as it is in heaven,” including the imprecatory nature of the Lord’s Prayer:

"Such prayer, then, is to be our protection and defense now, is to repel and put down all that the devil, Pope, bishops, tyrants, and heretics can do against our Gospel. Let them all rage and attempt their utmost, and deliberate and resolve how they may suppress and exterminate us, that their will and counsel may prevail: over and against this one or two Christians with this petition alone shall be our wall against which they shall run and dash themselves to pieces. This consolation and confidence we have, that the will and purpose of the devil and of all our enemies shall and must fail and come to naught, however proud, secure, and powerful they know themselves to be."

Thus, per the Lutheran Confessions, every time we pray the Lord’s Prayer, Christians are praying an imprecatory prayer that demonic tyrants (e.g., Obama and his demonicrat supporters) dash themselves to pieces according to God’s will.

Gee Carl, I guess that makes you a much better (re: authentic) Lutheran than myself. Indeed, your coined term "Lufauxran" has appeared in a good many of your posts, both here and elsewhere. I think that, along with a cut-and-paste approach, this constitutes the majority of your approach; instead of seizing upon my point, which is merely a call to humility in dealing in such matters, you trot out the Trojan horse cry of "eisegesis!" and proceed in your inimitable fashion to shred via the aforementioned methods.

You have my word as a confessional that I will never reply to another of your posts again.

Bask in your own self-congratulating satisfaction. I will now go and repent of even having bothered to engage.

Gee, Wylde, your irrational guess has nothing to do with what I specifically stated about your post, and supported with references, links, and quoted (cut-and-paste) excerpts. Your misuse of Scripture was indeed eisegetic.

And now, in a hold-my-breath-until-I-turn-blue tantrum, you announce to the internet world that you will never reply to another of my posts again.

If not impressive, your posts have at least made an impression.

It's just not Bathhouse Barry who is attempting to subvert morality in the U.S. East coast establishment GOP lobbyists, as well as organizations like Log Cabin Republicans, are trying to soften Republican positions opposing queer marriages.

According to an article, "Lobbyists quietly advise GOP on gay marriage shift," lobbyists to the GOP seem to have persuaded eight Republicans-in-name-only (RINO), including Rep. David Jolly (FL), to shift their stance on queer marriage. Jolly said last week that he believed states should honor same-sex marriages, although he claimed it was “contrary to his Christian beliefs.”