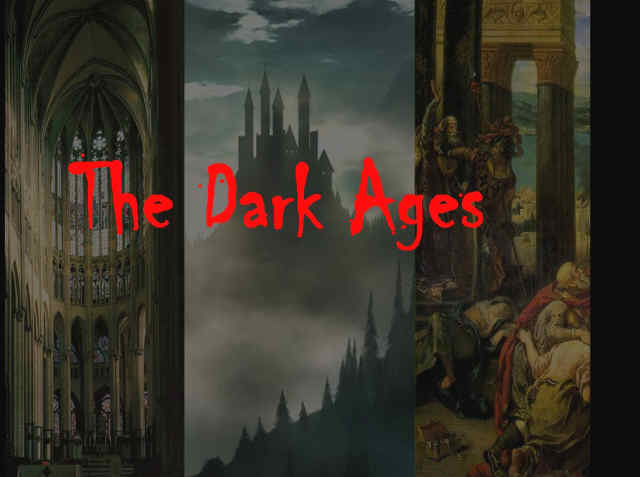 It is my personal quest to stop the use of the term "Dark Ages" to describe the period from the fall of the Roman Empire to the start of the Renaissance.  While it might be descriptive of the relative relationship of the world and its state following the decline of the Roman Empire, the lack of a more centralized government, the devastation of plagues, etc...  the period was not without its light.  The idea of a Dark Age originated with Petrarch in the 1330s and was primarily a term applied to literature.  Although later applied by Caesar Baronius in 1602 to a tumultuous period in the 10th and 11th centuries, it has become common to characterize the entire period of the Middle Ages as a time of intellectual and artistic darkness -- it not in fact at least in relative terms to the periods before and after this time.

That said, I sometimes wonder if we are not entering a new age that might equally be described as the "Dark Ages."  Many of the things used to define the term for the historical epoch from 600 to 1300 are reoccurring -- at least in terms of an intellectual darkness.  Though some may insist that it is impossible to compare our "enlightened" age with such a period, there are points in common.
I am not Chicken Little and I am not saying the sky is fallen but I challenge those of us who would resist the pressures of a modern day Dark Ages not to sit idly by as our community, culture, and church are taken from us.  There is more at stake than ever before...
Posted by Pastor Peters at 6:00 AM

This is right on the mark. Our present day is, in many ways, much more dark than any time before. It shows every sign of getting much, much worse before it gets better (if that every happens). We do live in the Dark Age.

OK. Not the Dark Ages. Rather, let's call it "The Time When No One Sane Would Want to Live." Some things may have been better. But those things are few and far between, and were probably enjoyed at the time by, at best, 5% of the population.

Oh — and enough about social media. Why do people fetishize personal contact and relationships? It's as if they've never actually had to spend much time with people in the first place.

I wonder also, whether Christianity has ever been so fractured and divided. Most churches seem to present a false gospel and the number of churches that remain truthful to the gospel seem few and far between.
I suspect there has always been dissension -- a reflection of our sinful flesh? -- and this has led to there always being many different church denominations. But historically, did they at least agree on the fundamentals, whereas nowadays they do not agree on anything!

David: Even in the time of Paul, we had divisions in the church membership. Never has there been a totally united church where everyone
believed the exact same thing.
What LCMS beliefs are not "fundamental", and would the LCMS join with another group if we had disagreement on non-fundamental issues?
I see God laughing at our arguments and disagreements.