Incomprehensible does not mean inapproachable. . . 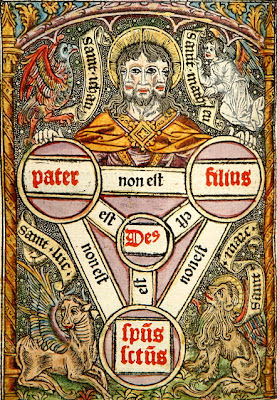 With the sound of the Athanasian Creed distant in our ears from the Sunday of the Holy Trinity, it is strange how we find it so easy to isolate tidbits from the whole and then raise questions.  Chief among them is the isolation of the final lines (those who have done good and those who have done evil...) from the beginning definition of the catholic faith that unless one believes one will certainly suffer eternal death.  That said, I am sure many folks find the Quicumque Vult a baffling creed but I am strangely drawn to it because I think it speaks of God in much more concrete and contemporary terminology than we usually care to admit.

The Athanasian Creed does not use abstract terminology to speak of God as it appears at first glance.  Rather, it uses concrete language and language we use all the time -- Person, Father, Son, Spirit, He, One, etc...  Contrast this with the usual ways in which we speak of the internal workings of the Trinity (substance, essence, etc...) and the Athanasian Creed is remarkably earthy and modern -- if we will hear it.

I also love the way the creed speaks of God as mystery -- not completely unknowable but known as much by what God is not.  That is exactly the way we speak of things we do not know.  We address them from the perspective of what they are not.  In this way the Athanasian Creed fits well with the way we approach any mystery.

It is also quite logical and orderly in its construction.  John Henry Newman, a fan of the creed, outlined its truth in this neat little progression that summarizes its faithful confession:
The other thing about the creed that I like is the inherent insistence that the Trinity is not a truth proposition to be argued or defined by the mystery to be worshiped as God Himself has made possible by His own self-revelation and the mans of grace that give access to the grace in which we stand.  The catholic faith is not something to be left to the learned in their scholarly debates nor is the Trinity a philosophical endeavor.  Rather, we encounter God where He discloses Himself and confess Him as He has revealed Himself.  We worship one God in three persons not as some vague spiritual notion but as the God who speaks through the living voice of His Word, who places His Trinitarian name upon us in our baptism, and who delivers to us the heavenly food of Christ's flesh and blood as the fulfillment of the paschal promise and the foretaste of the feast to come.

Those who have done good are those who so worship and believe for it is only in this context that they can do the good works of Him who has called them from darkness into His marvelous Light -- works of faith done not to merit grace but because grace has visited them through the Word and Sacraments, declared them holy, righteous, and blameless in the crucified and risen Christ and given them the new birth of water and the Spirit.  Those who have done evil have not done worse works but have rejected this faith, refused to worship the Triune God, and chosen to life apart from the grace of life He sought to bestow upon them.

What is so hard about that?