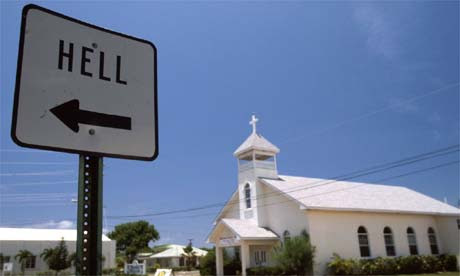 It is certainly not uncommon for people who have gone through the wost horrors of this mortal life to declare their experience as hell on earth.  In the shadow of D-Day with its waves of death prior to success, we could well imagine the living hell that those soldiers endured... or the Concentration Camps... or Stalin and his purge.. or the more recent atrocities of the Khmer Rouge or the Sudan or even now in Iraq... truly hell on earth. In another sense  those waiting what will only be bad new at the hospital or a young family at the funeral home grieving a mother or father or child -- they all qualify as nominees for the title true hell on earth.

But C. S. Lewis described hell somewhat differently.  We must picture Hell as a state where everyone is perpetually concerned about his own dignity and advancement, where everyone has a grievance, and where everyone lives the deadly serious passions of envy, self-importance, and resentment.  Yes, hell is that -- searing flame that tortures without consuming, separation from Him who is the Life and the Light, punishment that knows no end... but I wonder if C. S. Lewis has not caught on to something.  If God giving someone over to sin is simply allowing them the full consequences of their choice, then hell just might be the unbridled and unrestrained selfishness, narcissism, and victimhood that seems more and more to characterize not simply a place of eternal torment but the shape of our modern day world.

Individualism that refuses community by always and in everything placing self first... where everyone has a grievance against another, a complaint against all, an excuse for their brutality, and justification for their disregard of others...  where the passions are no longer subject to the self-control of will or morality but reign in our members with impunity...  where privilege replaces responsibility and people claim what they are owed instead of working for that which is earned...

Without world war or financial collapse or personal tragedy, we dwell in a modern day living hell in which those things that once were acknowledged but disdained have become the virtues of our day.  We define everything through the lens of pleasure, happiness, sex, and self-interest.  Perhaps no more than a previous age but certainly without the public shame or embarrassment that once constrained us from living what our sinful hearts truly believed, we are exactly that world in which everyone does what is right in his or her own eyes.  A society cannot continue without conflict when values, morality, and virtue no longer unity us or inspire us.  No, there is no heaven on earth nor has there ever been but the increasing reluctance to hide or restrain our evil lusts and desires makes it possible to say that there is a hell on earth.

The remedy is not simply to seek a refuge from the world but to speak even more boldly and without regard to the consequences the truth of God's Word with love for the lost and without a gloating heart over those who may well get what they deserve.  If Christians are to be a leaven in society, they cannot aid the curb of the law by abandoning the public square nor can they help the eternal saving purpose of the Father by speaking the Gospel of His Son only to themselves.  Courage is what we need --the Spirit's gift of holy boldness not for individual glory but for faithfulness in word and deed to Him who has called us from darkness into His marvelous Light.  Ours is not merely the story of a God angry over self-centeredness, immorality, and injustice but a God whose lament over the sadness of our state moved Him to act unilaterally in His Son to bring mercy to bear in a world deserving only condemnation and punishment.  As much as Christians want to condemn what is wrong around us, we dare not forget to proclaim with at least equal vigor the mercy that redeems, restores, and rescues us from the hell of our own creation as well as the hell first created for the spirits who refused to bow the knee to the Lord.
Posted by Pastor Peters at 6:00 AM

I am guilty of what you describe. May God grant all His flock His grace, mercy and love to share with the world. Those attributes mixed with the Truth of His Word will both make us the object of rejection at least, hatred, and persecution at worst (maybe even martyrdom in the future).

May I never gloat over the soul headed for the real, final Hell not on this earth.