Are you the One? 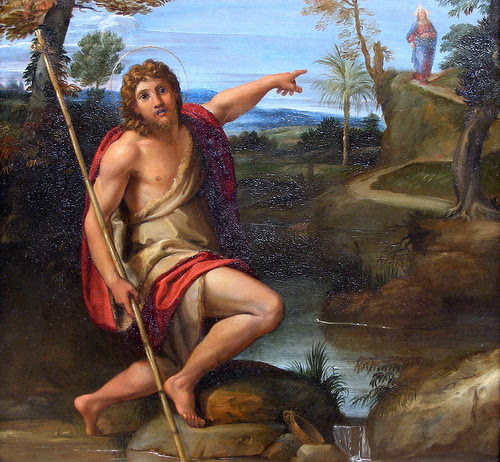 In the stir occasioned by the startling appearance of John the Forerunner, the question everyone wanted to ask was “Who are you?”  This had nothing to do with John’s parentage but everything to do with what his coming signaled.  “Are you the One?”  In other words, we have been waiting a long time, are you the One whom we have awaited for so long?
It is our question, too.  Like those long ago, we have found ourselves disappointed so often.  We are almost afraid to hope. From political leaders to religious leaders, we have raised our hopes only to see them dashed upon the rock of disappointment.  We are afraid to trust, afraid to believe, and afraid to hope.
So the question that came to John so long ago still fits.  “Are you the One?  Are you the Lamb of God who takes away the sins of the world?  Can we trust you not to disappoint us?  Will you fill our empty hearts?  Will you repair our broken lives?  Will you comfort our sorrows?  Will you heal our sick and dying bodies?
We can relate.  Too many have played with our hopes and dreams and left us cold and empty inside.  We want to believe but we have been disappointed so often, it is hard to believe.
John does not shrink from the hard truth.  I am not the One but the One whom you seek is coming.  You will know Him not merely by His words and promises but by the way He keeps His promises and delivers what His words speak.
The Spirit of the Lord has anointed me. . . These are the words Jesus fulfills.  He comes not as a wannabe but as One who was sent.  Sent to bring good news to the poor, to bind up the broken, and to free the captives.  Later when some of John’s followers have second thoughts, Jesus does not convince them with words or arguments but the prophetic word fulfilled.  What do you see and hear?
Like the crowds of old, we want to know if Jesus can do it.  Can He deliver upon all our needs and do for us what God has promised?  The mark of Jesus and His answer is not words or promices but the actions of righteousness and redemption.  This we know not by uncertain evidence but clear truth.  Just as John was not sent with only his opinion to share, neither are we subject to mere opinions or hunches.  What does Jesus say and do?  What do you see and hear in Him?
Christ is not some distant deity whom we must find but the Savior whom the Father has sent.  He stands among us hidden in the clothing of flesh and blood, born of the Spirit and the Virgin.  If our eyes might miss Him, faith does not.     Christ is the incarnate Word of God who does what He says. This performative Word does just what it says.  It is powerful enough to speak and bring forth all creation and it is powerful enough to speak and rend our hearts to believe in Christ.
Christ is the incarnate Word who lives in baptismal water and makes it deliver to the dying who are brought to the font the fullness of Christ’s life and forgiveness.  Baptism is not a symbol.  In fact, as a symbol it offers us little of value.  But it is water and Word, churning with the grace and mercy of God.  It kills what the Law has already declared dead in trespasses and sin and it bestows eternal life so that death cannot overcome us.
Christ is the incarnate Word whose voice calls to bread and it becomes the very flesh of Christ for the life of the world.  He is the incarnate Word whose voice speaks to wine and it flows red as blood.  We meet a God who acts, who delivers, who transforms...  And there is forgiveness for sins too many to name, righteousness to cover the darkest guilt and shame, and life strong enough to withstand all the forces of evil and death.
It is strange that the things most certain in our lives are not those seen with eyes or touched with fingers but that which we know, confess, and believe by faith.  We hard the words of those who saw the glory of the manger and journeys half a world to meet Him who is born Savior of the world.
We heard the reports of those who heard the voice from heaven when Jesus came up out of the baptismal water.  We heard from those who saw Him suffer and watched Him die on the cross.  We heard from those who saw the body laid in the grave with all its coldness and death.  We heard from those who went to the grave and found Christ risen never to die again.
In Advent we come – asking, begging, and pleading... “Are You the One, Jesus?”  We want to know if He can do for us what we want and need.  We want to know if He has stuck with us even when all we ever did was screw it up.  We want to know that nothing and no one can drive Him away or cause Him to give up on us and our broken lives.
That is Advent’s promise.  He is still there.  He has not abandoned us or written us off or forgotten us.  He has come to us with great power and He still wields that power to redeem and save us.  He who calls you, He is faithful and He will do it. There are few things in life that are sure – death, taxes. . . and Jesus, even more sure.  Amen.  Come, Lord Jesus!
Posted by Pastor Peters at 6:00 AM

"One age can ruin what centuries built. It will take more than one age to build again on the ruins." Anthony Esolen

In the winter of my life I have come to know with the help of the Holy Spirit "prayer is the work" not preparation for it.