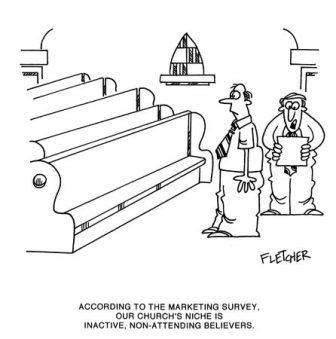 The same could be said of Lutherans.  We are not smaller in identity.  I venture to say that polls would find that there are nearly as many people who call themselves Lutheran as ever before but the problem is that the numbers of those folk participating in the life of the church is substantially smaller.  It is this statistic that fuels the cries for changing the church or we will die.  Our backdoor losses and the growing numbers of those who no longer sit in our pews are serious.  We cannot afford to act as if the decline is not real or not threatening.  But therein lies the problem.

Most folks have not left because of a big fight.  Most have not run off in a huff over some imagined or real offense.  Most have gradually and slowly disappeared.  Their have learned a new habit and that habit does not include attendance at the Divine Service.  They are fueled and fed by other means.  Some continue to read Scripture and pray but many no longer know the Word of the Lord as the comforting and familiar voice of their Good Shepherd and find it hard to fill more than a few moments a week in prayer.

Not a few have come to question what they once believed.  It has not squared with their experience.  It conflicts with their sensibilities.  It no longer feels relevant to them.  They have moved on.  In their minds and hearts many (perhaps most) still feel like good Lutherans but that good Lutheranism does not include the Church (except for the ordinary emergencies of life, especially death and burial).  I encounter many of them (as I would expect most pastors do).  They are not unfriendly, they are not rude, and they are generally not angry.  They are happy to have me be there for them and to dispatch the loved ones with the legacy of the faith they once participated in most intimately.  But they will probably not be back. That is the saddest of statements.

I believe it was Lyle Schaller who once admitted that it was easier to revive a congregation with new people than to try and reclaim the old ones who had fallen away.  I have found myself grudgingly in agreement with him.  The efforts to reclaim the Lutherans who do not miss their church are difficult and show meager success --- especially when compared to those who have heard the sound of the Lord's voice and found it language of grace surprisingly new and compelling.  Yet, I am not without some guilt over the admission that it is harder to reclaim the lost than convert new folks.

From time to time I engage these folks who once were in the pews of my own parish.  Sometimes it is with official letters.  Sometimes it is with personal notes.  Often it is via phone call or message.  Even emails remind them we have not forgotten them and we pray they have not forgotten Him.  It is hard stuff to win back those who do not seem to miss their life together with us around the Word and Table of the Lord.  It is part of what pastors do even if the results are not all that fruitful.  For by seeking out those who have fallen out of the church habit, we give witness to the seeking love of God that also comes for us, when we too grow weary, tired, and unsure of the benefit of life together.  The holidays are coming and some, prodded on by old habits that die hard, will be sharing the holy day with us -- even though they have been gone for a long time.  Let us not forget to welcome them and remind them why it is good for them and for us for them to return and return often.

Is declining church membership actually due to "backdoor losses" or to the declining birth rate for Lutherans and Americans in general, which has decreased sharply since the late 1960s following the post-war baby boom?

If the decline in Church membership were largely due to the declining birth rate among Lutherans and Americans in general, then you would expect LCMS membership as a percentage of overall population to be relatively constant (unless the birth rate among Lutherans is significantly lower than that of the population as a whole, which I doubt is the case).

In fact, the percentage of the population that is LCMS Lutheran has gone from less than one-half of one percent in 1920 (the first year on your chart) to a high point of 1.4% in 1970, and then a drop to less than 0.7% today. If LCMS membership as a percentage of population had held steady over the last 40 years, there would be roughly twice as many Lutherans in LCMS pews today.

The statistic that I think is key is, how many people who were baptized at LCMS fonts are being married at LCMS altars and baptizing their children in LCMS parishes? I don't know those numbers, but my sense is that too many people who were raised and catechized in our Churches are abandoning the practice of their faith when they become adults, and failing to raise their own children in the faith.

It doesn't matter how many children you have if you don't baptize them and impart the Gospel to them.

Maybe it's time to tend the back door more earnestly while closing the "sacrament factory" to those who show no commitment to the church but have some past ties to it. Also, there seem to be a lot of guesswork as to the motives of why people leave the church without any verifiable reason; ie what those people actually told you.

Many of us have become comfortably complacent.

Yes, Lisa: Catechesis! We have not been taught! For many years pastors have neglected their most important "duty"... to teach their sheep. I've been Lutheran since I met my husband in 1948... and never heard of the Book of Concord until 2009... in my current confessional LCMS church.

We have no loyalty to the Lutheran Church because we were taught that other "Christian" churches are just like us. "We will not be the only ones in heaven." We have lost our faithfulness due to ignorance of what Lutherans believe.

This is just my personal belief. But, I have seen my whole family, and extended family, with one or two exceptions, leave the Lutheran church.... because of lack of or poor catecheses. It breaks my heart.

I've heard some people who don't go to church or have attended other denominations for decades, yet claim that they're still Lutheran. Next time I hear this my reply will be "No, you're not."

I left because LCMS treats women like dirt. Good riddance to bad rubbish!

Are you talking about matters of teaching, or matters of practice? Or both?

Finally, were you able to find another orthodox Church body that is better in this regard than the LCMS?

I can't think how the entire Synod treats women like dirt. I can only assume this anonymous poster is pro-women ordination.

If that is the case, it is better for you to be a heretic than a hypocrite and thanks for leaving.