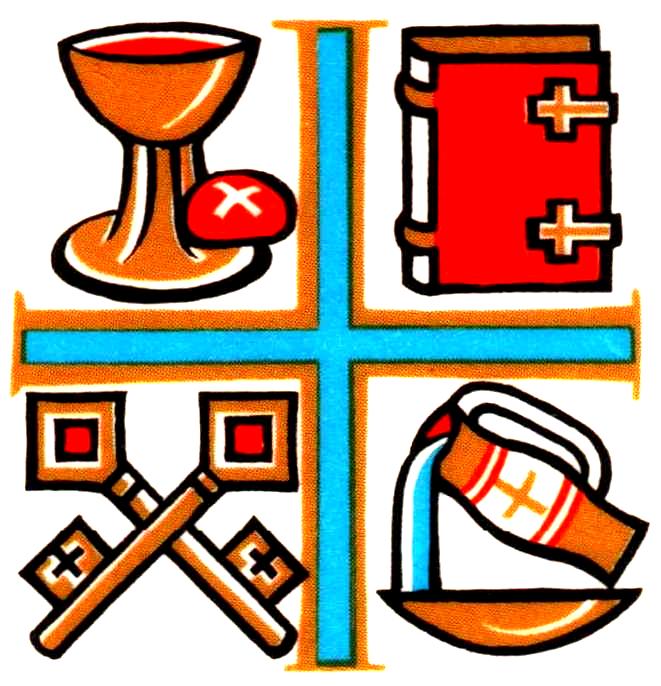 The problem, then, with the phrase “Liturgy of the Word” is that the Word, as such, is fully and really present only in the Liturgy of the Eucharist, when the Word Himself is personally present in His divinity and glorified humanity. The sign of the difference is that, while we offer incense to the Gospel in honor of Him whose Gospel it is, it would be sinful for someone to bow down and adore the lectionary, placing his faith and trust in it, and loving it above all things, whereas it is precisely this adoration or latreia that must be given to most holy Eucharist; indeed, as Saint Augustine says (and Benedict XVI often quotes him to this effect), we would be guilty of sinning were we not to adore It.

A Protestant confusion is thus introduced and subtly fostered. According to the Catholic faith, “God’s Word” is chiefly and primarily in the Holy Eucharist because it is Jesus Christ, and only secondarily in the Sacred Scriptures that contain His teaching and bear witness to Him. Like all mere signs, Scripture will pass away in heaven, as the Book of Revelation teaches: “I saw no temple in the city, for its temple is the Lord God the Almighty and the Lamb. And the city has no need of sun or moon to shine upon it, for the glory of God is its light, and its lamp is the Lamb” (Rev 21:22-23). Like all mere signs, it is only for the wayfarer. In Protestant churches, one often sees the Bible sitting up on the main altar, where the tabernacle ought to be, as though at the center of Christianity were a book, something written in lifeless letters on lifeless paper; such an architectural arrangement expresses the very essence of the Protestant heresy, where words replace the Word in His living and life-giving flesh and blood.

I guess  the point is I am in shock at how little the written Word means to him, if not to Roman Catholics in general, if he is representative.  As a Lutheran, we do not devalue the Word of God as the living voice of God speaking through the Scriptures in comparison to the Word who comes to us in bread and wine, His flesh and His blood.  Yes, it is true that some Lutherans devalue the Sacrament over the Word but this is a flawed and mistaken understanding both of Luther and the Confessions.  There is no legitimacy for such an erroneous reading of Lutheranism, no matter how popular or deeply held its viewpoint is.  At the same point in time, however, when Lutherans read "My Word shall not pass away though heaven and earth do..." we do not read Word as Christ distinguished from His Word in written form.  It is shocking to me to read the author say that the Eucharist is Jesus but the Scriptures only contain His teaching and bear witness to Him.  If this is, indeed, faithful Roman Catholic teaching, then the words I have read are freighted with a meaning different from the literal sense of the text.  In most cases, I read Roman Catholic liturgical theologians to have nothing but the highest regard for the Word of God that is the Scriptures.

In fact, I would boldly contradict the author who characterizes this as a Protestant viewpoint.  Most Protestants would heartily agree with him -- the Scriptures are not the Word of God but contain His Word, His teaching, and bear witness to Him.  In that regard we Lutherans stand outside Protestantism to say that the Word of God (Scripture) is not merely a witness but the living voice of God speaking to His people in the same way the voice of Christ once spoke to His disciples.  Scripture is God breathed, it is a performative Word, and, as Isaiah reminds us, accomplishes God's purpose without fail -- just as in creation the Word spoke and all things came into being (Francis acceptance of evolution aside).

For us as Lutherans, Christ is incarnate in His Word as in His meal -- here we have access to the grace in which we stand.  His Word with water is baptism and His Word with bread and wine is the Eucharist.  We Lutherans have endowed no priestly superpower to individuals but consistently place the power with Christ and within His Word.  Our working definition of sacrament is the earthly element married to Christ's Word as Christ Himself instituted, commanded, and promised, and through which He delivers what He promises, namely, forgiveness of sins, life, and salvation.

Yet, though I thoroughly disagree with the author's characterization of the Word as mere witness to Christ, I do agree that the older terms are better for the designation of that portion of the liturgy which surrounds the Word and that portion which surrounds the Meal.  I do think, though I doubt it will ever become normative, that the terms Liturgy of the Catechumens and the Liturgy of the Faithful are more accurate descriptors of the natural division inherent within the Western liturgy and liturgical pattern which Lutherans share with Roman Catholics.

So, yes, it would be good to rename them. . . but not for the all the reasons offered in this article....  So now I suppose I have thoroughly confused you.

Pastor P, you have mistakenly attributed a Liberal belief about Scripture to Protestants, none of whom share that view. While WCF uses the language, it means that the Word of God is that which the Scriptures contain versus the words of men. It is Liberalism that uses the word "contains" to mean that Scripture contains the Word of God amidst a load of human drivel.

BTW as a Lutheran I'm proud to be labeled a Protestant (a RC pejorative), as we were the first Protestants so maligned.
What I don't see is why so many Lutherans feel more kinship with the Babylonish Whore than with fellow Protestants in Geneva, none of whom burned Lutherans, added to Scripture, or anathematized the solas. Please enlighten me.

Because the Word written will pass away, it doesn't mean that here and now we don't revere it. We should not be guilty of bibliolatry, as some protestants are, but the written and spoken Word are Holy, and to be reverenced.

It is to be expected that someone who sees tradition and the decisions of a magisterium as trumping the Word would write as he has.Perhaps someone should remind him the Pope (office) and the Magisterium will also pass away...

Not confusing at all, Fr. Peters. There are some traditions more appropriately named (and practiced) than others. 1500+ years of verbal habits have been broken that maybe should not have been.

If protestant meant today what it meant in the 16th century, Lutherans would be proud to use that name. However, you are in the smallest minority in thinking that protestant means anything like that today. Protestant to nearly everyone (including those who glory in that term) means non-sacramental, generic Christianity without a specific Gospel and without an understanding that the Scriptures are the infallible Word of God. This might be why Lutherans today are not so keen on being lumped in with Methodists, Baptists, UCC, Presbyterians, and even Unitarians.

The name "Protestant" is much like the word "Evangelical," and many other words; it no longer carries it's original meaning. Luther did not want to abolish the Catholic Church, but to reform it. To protest is not equivocal with abolition. Our brothers and sisters of the Reformed (another word which has lost it's original meaning) have abolished the Mass. They reject the Sacraments (though they still call them that).

As a former Calvinist, I heard many, many times, "Luther didn't go far enough." I'm sorry, but doing Scriptural gymnastics to fit your system is going much too far. I could not stay with Calvinism because it removes the mystery and seeks to resolve the paradoxes.

The 'Reformed' ARE our brothers and sisters, and so are some Catholics, Baptists, Methodists, Nazarenes, etc. The 'felicitous inconsistency' does not require Lutherans to look like them, nor to look like the RCC. The reforms of the 16th c. are sufficient to differentiate us from the RCC.

Kirk, true, no Lutherans were burned in Geneva. Our kinship however is with the Church catholic (small 'c') more so than Geneva. Calvin did not add to the Scripture, but he did deny some of what it plainly says. Yes, the Solas are shared, and that is part of why we believe they are brothers.

Pastor Peters: Thanks for bringing my attention to this article by Peter Kwasniewski from New Liturgical Movement. Interestingly when I went to read the entire article online and looked at the comments section, many of the Catholic commentators were as upset as you were with Kwasniewski's downgrading of the written Word of God. One of them in particular wrote:
"there is a deep analogy in many of the Church Fathers between Christ's presence in the Eucharist and in the Divine Word of Scripture, and here, in this article, it seems like you are minimizing Scripture, which we should seek not to do, for as St. Jerome says ignorance of the Scriptures is ignorance of Christ." And another Catholic commentator wrote: "One of the real problems with the faith of many Catholics (myself included) is our lesser attention to Scripture than our Protestant brothers and sisters. One of the reasons I think much of the Vetus Ordo is so lovely is that Scripture breathes throughout the prayers, and the WORD is really spoken throughout. "

@Anonymous: if you wish to surrender the term Protestant to the evanjellyfish, or the word gay to the sodomites, go ahead, but they can't dictate my language. Besides, given the many discordant and discrepant faces of modern Lutheranism, by your logic you might as well discard that term as well. That might not be so bad, as we follow Luther only where an dwhen he followed Christ; I don't think he'd be happy with a church named for him.