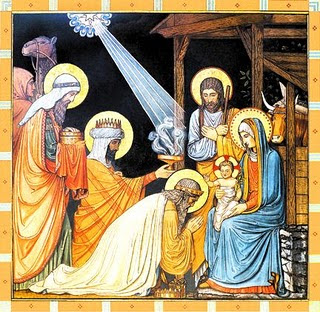 Epiphany is the strangest of stories.  We have no clue who, from where, or how many of what Scripture calls the "Magi" or wisemen came to worship Jesus.  What we think of astrologers or palm readers may pale in comparison to the real identities and reputations of these Magi.  Yet, God called them.  By a star He led them on an epic journey.  To the Child of His promise, God brought them.  And now they stand as examples of the wisest of the wise.
The priests and prophets knew the Bible and could accurately direct the Magi to the city where the Christ was to be born.  But they did not have enough faith to follow them, not even enough curiosity to go over and give it a "What if..."  Herod consulted the Bible but abused its revelation to lie, deceive, murder, and then gloat in his wickedness.  But here we are on Epiphany, remembering and honoring the Magi who had only a star to lead them yet they followed.
They were not wise in the sense of earthly knowledge, keen intellect, or astute judgement.  No, they had little to commend them EXCEPT faith in the voice, light, and promise of God.  As the Psalmist says, the fear of the Lord is the beginning of wisdom.  They were truly wise in the ways of faith and we seek the same wisdom.  They certainly did not follow as people who comprehended what God was doing.  They could not have known what the end of their journey would be, but that did not hinder them from following the light of the star. Are we so wise?
They did not have a clue what was waiting for them but they prepared with their best, the worship of their bended knee, the gold that the world values, the frankincense of priestly offering, and the myrrh that hid the future of this child in the cold, darkness of death.  Are we prepared to give such gifts?
The destination was surely a surprise.  Just a baby with nothing to reveal who He was except the mystery of the star that let them here.  Yet not just a baby, either.  Here is the God who wears a diaper and nurses at the Virgin Mary's breast.  Here is the mighty God hidden in the weakest of forms, as a mere infant.  Here is the God who has come to rescue His lost people and yet who must Himself be rescued from the lunatic named Herod.  What a mystery!  Who could have known?  Was the surprise worth it?  Could they have been disappointed – surely there were babies where they came from. . . but no child like this One.
You come here week after week and there is no magic here. It is thoroughly predictable.  The Word that forgives, the water that cleanses sinners, and the bread and wine that feeds eternal life.  It is the surprise of surprises.  God does not come to us in heavenly glory but in human form – word, water, bread, and wine.  Yet here is the end of all our journeys and the beginning of all our hopes.  It is the surprise that is comprehended only by faith – that God comes to His people hidden in ordinary means.
The Magi's wisdom was nothing but a gracious trust in a word and a promise the world found foolish, that none of the wise in Jerusalem were curious enough to check out, and that came into the world while everyone slept. What they found was not something never seen before – a baby.  Hidden in flesh, the Godhead see, so we sing.  We want to be wise; we study things as if God had hidden Himself in facts and figures, in intellect and IQ.  But the wisdom of God is available to infant, to child, and to those who will become like children in faith.  It is found in the surprise of infant flesh, efficacious Word, living water, and bread and wine that hides flesh and blood.
We who would be wise need to become like the Magi.  Where there is faith to recognize God's presence and promises, to trust in them, to follow them, and to rejoice at the ending point – there is wisdom.  Faith to rightly value the things of this moment and faith to return to the Lord our very selves, and along with our worship, our tithes and offerings.
We tend to think of our tithes and offerings as votes of approval or perhaps disapproval of how things are going but the Magi show us they are much more than this.  They are the marks of wisdom to value more than anything the God who came to us in flesh, the Gospel of forgiveness, and the promise of life death cannot overcome.  They are signs of faith and marks of the wisdom that is willing to meet God not where we might expect Him but where He has chosen to reveal Himself.
Today we pray to be so wise – to possess the wisdom of faith.  To see the Light of Christ.... to follow that Light... to trust in that Light to bring us where we need to be... and to have gratitude enough to open our hearts, lives, and wallets in worship of Him whom the Lord has given us to be our Savior and Redeemer.  Such faith and wisdom and worship may not be all that Christ deserves but it is what He asks of us. This is the wisdom of the Magi.  Amen.
Posted by Pastor Peters at 6:00 AM