The Voice of Disfunction. . . 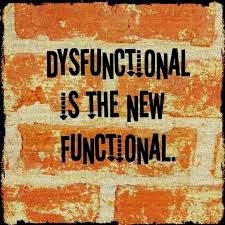 DYSfunction always screams at the top of its lungs while the functioning seem either to whisper or remain silent.  I read recently that the Roman Synod on the Family should have been renamed the Synod on on Divorce, Remarriage, Alternative Families, and Homosexuality.  Fully 61% of of the word count was directed to the single or divorced.  About 7% to those to be married and another 7% to those newly married...  Cohabiting couples and the civilly married got 17% of the word count.  Homosexuals got 7% of the word count but only one sentence was written about men as husbands and fathers.  Not to pick on Rome, this is a typical example of how we deal with things in the church.  We tend to ignore the intact and functional and focus on the broken and dysfunctional.

The problem with this is that it skews the way we think of things as a whole.  For example, when I asked my middle school age catechism class whether there were more Roman Catholics in the world or gay people, hands down they said "gays are a larger percentage of the population than Roman Catholics..."  It is not merely a mistake; it is a mistake of colossal proportions!  Yet they have been conditioned to "hear" things in such a way that this was their unmistakable conclusion.

By the example of the media and even among churched folk we would assume that most all marriages end in divorce, that few people are actually married and have children, that the population of gays and lesbians in the pews is perhaps 1 of 4 Christians, that nearly everyone begins having sex with whomever is available about age 16 and this promiscuity continues unabated both for the married and those single.

We do NOT talk enough about those who sit in the pews every Sunday, faithful to their spouses, raising children with faith and good moral compass, seeking to do good and to be good to the glory of God, living out their faith within the boundaries of repentance and forgiveness, and paying attention to the catechism and the Word of God... These are not the oddities or holdovers from an antiquated generation.  These Christian people are not exceptions but actually do predominate among the faithful.

The voice of dysfunction always screams for attention but the intact, functioning, faithful Christian folks and families among us are too silent and hidden for our own good.  We need to address them, encourage them, raise them up as models, and honor them -- EVEN as we address the dysfunctional with their many wounds and needs.

The same can be said for the faithful in other aspects of our church life.  There are Christians and pastors and congregations that live on the fringes of good taste, faithful teaching, and orthodox liturgy -- too many of them -- but let us not forget the parishes, people, and places where people endeavor to actually be faithful in doctrine and practice and who aspire to beauty in service to the Gospel and to glorify God.  God bless them.  It is not impossible to be married and faithful, a family intact, single and chaste, a vibrant parish living within the twin poles of Word and Sacrament and engaged in the mission of Christ.... And we must never let it become the impression of our people that such is beyond the pale.  We do them a disservice even as we do the dysfunctional a disservice by suggesting that broken and wounded and bleeding is the only posture for Christian people and parishes.
Posted by Pastor Peters at 6:00 AM

I agree with you. Sometimes a report will be generated by an academic or a pollster and it will explore an issue like divorce, for example, and cite skewed if not false statistics. The media, ever looking for spin or excitement, will carry the report with little regard for fact checking. I do believe there is much dysfunction in society, but it is often reported in a way implying that more people than factually relevant are involved in the problem. It doesn't make the issue less important, but it exaggerates the intensity,