The cruelest of actions. . . 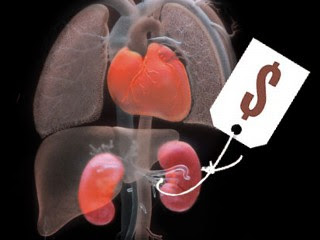 Undoubtedly you have read of the reports of Planned Parenthood harvesting some organs from the aborted fetuses and then selling them.  You can read about it here. . .  If you have the stomach for it, you can hear the casual recounting of this in this video purporting to show Dr. Deborah Nucatola, Senior Director of Planned Parenthood’s Medical Services Department, describing the process of the extraction of the body parts of an aborted fetus for commerce.


“It makes a huge difference,” Nucatola replies. “I’d say a lot of people want liver. And for that reason, most providers will do this case under ultrasound guidance, so they’ll know where they’re putting their forceps. The kind of rate-limiting step of the procedure is calvarium. Calvarium—the head—is basically the biggest part.”


My point in writing is not to report the news but to raise questions about the values of a society in which we view the fetus, perhaps even a child already born, as a source of parts for others.  For a long time those pro-life and anti-abortion have raised the specter of aborted children having value as a source of parts for study, transplant, and research.  Stem cells were the tip of the iceberg.  In fact, stem cells were mentioned on this video, but clearly stem cells are not the end of the story.

We find ourselves at a critical juncture.  We find exposed here the lie that the safe, legal, and rare approach to abortion was ever a viable position; it always was a prelude to more. The dehumanization of unborn children allows our society to treat these children as objects, for the harvest of organs and for research.  The casual conversation in the video shows how easily this leads to the dehumanization of what is being done -- as if this were not a life or anything of consequence but a source of valuable organs or cells for harvest or research.  Those within the abortion industry have insulated themselves from the stark reality of what is being done and have been blind to the progress from killing living human beings to treating them explicitly as sources of commodities for use or for sale.

My point is simple.  Where will this end?  Is there an end?  This was never simply about those children aborted but about the character of life itself.  For if we dehumanize the children, we will end up dehumanizing ourselves and further betraying the gift and blessing of God's crowning creation.  We will have traded our fearful and wonderfully made character for the basest and most vulgar of values -- the dollar sign.  Friends, this is not simply an issue for Christians or for people with traditional values.  This is a scandal of the educated mind in which our technology has evaded our moral compass and we are doing what we have failed to adjudicate in the court of ethical and moral justice.  One need not be a Christian to see the danger signs all around us.  Wake up!  What have we become?!?

"This is a scandal of the educated mind in which our technology has evaded our moral compass and we are doing what we have failed to adjudicate in the court of ethical and moral justice."

Technology hasn't evaded our moral compass. Our nation's moral compass was plugged by lying, murdering traitors in all three branches of the federal government as well as in state governments, aided and abetted by the fifth-column leftist media (yeah, even "Uncle Walter"!) and the Demonicrat Party. For the most part, the GOP were gutless cowards.

While displaying an opposition of religiosity, Christian leaders have done little to stand against, much less imprecate, the satanic corruption of political leftists. This has contributed to the ability of these demonic leftists to commit their moral abominations.

The moral compass could be restored (never perfectly, of course), but it will require actions of justice that, frankly, many religious leaders and pewsitters have shown themselves too timid to support, much less undertake.

The 'compass' seems to be affected by money, mostly. A fetus is a lump of tissue until a HUMAN adult needs that 'tissue' to prolong their life. If that lump of tissue isn't a human baby, then why are we transplanting non-person tissue into persons?