But you are not gay, idolaters, adulterers, thieves, greedy, drunkerds, revilers, nor swindlers. . . 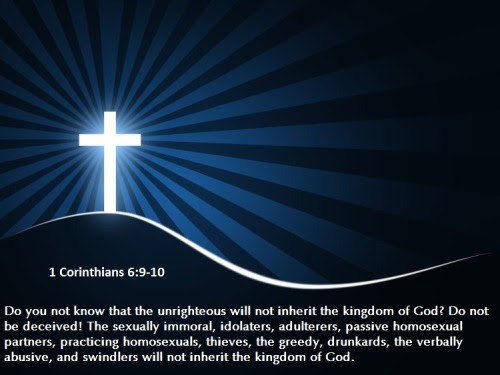 Scripture insists that the unrighteous will not inherit the Kingdom of God.  Do you not know that the unrighteous will not inherit the kingdom of God? Do not be deceived: neither the sexually immoral, nor idolaters, nor adulterers, nor men who practice homosexuality, nor thieves, nor the greedy, nor drunkards, nor revilers, nor swindlers will inherit the kingdom of God. And such were some of you. But you were washed, you were sanctified, you were justified in the name of the Lord Jesus Christ and by the Spirit of our God.  (I Cor. 6:9-11).  You can find the same words in a dozen or more places.  At first I am tempted to say but that is exactly the point -- God HAS opened the Kingdom of God to exactly such as these.  And I suppose from our earthly perspective, so conscious of original sin and the battle with the old Adam that is how it seems.  But that is not how it is.

The key verse is such were some of you.  Note the tense.  You WERE.  And this comes the all important but...  But you were washed, sanctified, and justified.  This is not some mere formality but a change in who you are.  Here is the most radical truth of Christian life -- God changes us and transforms us so that we are not who we were, but we were bought, purchased, washed, cleansed, and reborn to new life.  Our culture is shocked by the idea that we might not define ourselves.  It repudiates as utterly oppressive and alien the idea that someone else names us and gives us our identity.  Christianity is truly counter-cultural.  For the genius of God is that what He declares to be is what He makes happen.  So we are not sinners defined by our sins and condemned to live in their chains but set free in Christ to live out the new life of His creation and definition.  In Christ we receive this new identity and this new life and it is not the result of our own pious desire or achievement but by grace alone -- received by faith.

The world insists that we define ourselves, that we choose something to be the mark of our identity.  Nothing is more pure to the world than the unadulterated expression of our desire.  So it would be natural (according to our old nature, that is) to define ourselves by those desires.  So some would say they are gay and others straight and others something in between or perhaps completely off the beaten path.  That becomes the thing the defines us and everything we are is lived out through that lens.  But this is the worst kind of prison and it forces us to introspection and decision.  Youth becomes the start of this journey of self-awareness, experimentation, and definition.

But that is not how it is in the Kingdom of God.  Here is the radical notion.  WE do not define ourselves but God defines us.  Our identity is not the fruit of our own self-exploration and determination but His declaration which gives to us a new nature and life by baptism and faith.  The world insists "I am gay" or "I am straight" or whatever.  Christ insists that we are created in Him as new people, bought with a price so that we are not our own, and created for the good works of light and not of darkness.  The message of the Church is not simply that the unrighteous will not inherit the Kingdom of God but that that baptized are no longer the unrighteous.  We need to strive to live within the domain of this new nature and new life, eschewing anything and everything of our old lives that would enslave us and deprive us of all that Christ has done.  So Paul says Let each one lead the life that the Lord has assigned to him and to which the Lord has called him...  In this is the overriding principle that all things are possible but not all things are beneficial or helpful or good.  Freedom in the Kingdom of God is exercised not by the removal of boundaries but by the exercise of self-control.
Posted by Pastor Peters at 6:00 AM

This is another facet in the diamond of salvation being outside of ourselves. Being curved in ourselves is not only the person who gazes at his navel, but also the person who narcissistically gazes in the mirror at his own reflection. The baptized look into the mirror, and see Christ. Not that we are perfect, or have become Him, but that He covers us. Our reflection is no longer ourselves (we died), but Christ has given us the gift of the Great Exchnge.