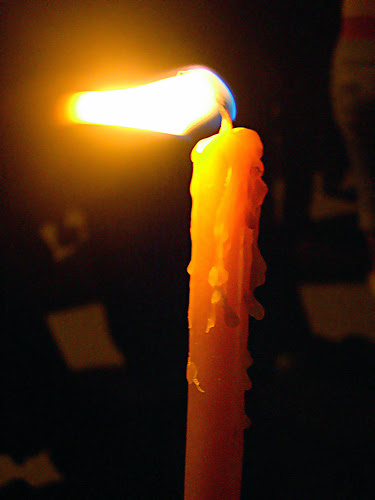 Once again I find myself wishing I had come up with the line:  We’re not just striking matches, but lighting candles.  The line is in reference to what happens in worship and is meant to condemn the kind of worship experiences in which people are spoon fed Jesus under the guise of religious entertainment or turning the gathering for worship into a means of evangelizing or substituting flashy media for solid Scripture or focusing upon self-awareness over the splendor of God's grace or making people spectators instead of participants or confusing faith with loving Jesus or mindlessly pursuing what people want for the moment or think they need this second instead of being faithful to the Gospel or using music to toy with the emotions of people instead of a conduit for the Gospel. . .

When you strike a match you see a sudden burst of flame.  Too often we confuse this with faith or mistake life in Christ for a constant series of flashes.  Life is not a stream of ever increasing emotional highs.  Just the opposite, life in Christ is lived out within the trenches of sin, disappointment, repentance, restoration, and renewal.  Too many churches seek a worship setting that strikes a match and leaves the people heading home in the afterglow when they should be lighting candles.  That is the problem with matches -- they burn bright and hot but quick and then there is nothing.  Too much of modern Christianity is designed to do just that in the life of the Christian and those within these churches face the real disappointment of emotional highs that cannot be maintained and unrealistic expectations about what faith is and how it is to be lived out.  So the unchurched are often people who were involved in Christianity but got burned out or burned up with nothing to sustain them through the long haul.  They burned bright and hot but only for a moment and then were left with a charred ember of what they thought was faith.

When you light a candle you do not get a sudden burst of great light.  Instead you get a small glow that is fragile but, if it continues, will burn into a sturdy flame that can withstand wind and remain burning.  We need to spend more time lighting candles that are meant for a long, steady light in the darkness rather than a quick, sudden burst that goes as quickly as it comes.

Nowhere is this more true than with the way we treat our youth.  Even liturgical churches have succumbed to the false idea that children cannot understand or appreciate the things of God without being entertained, usually with the latest and greatest technological toys, and spoon fed baby food instead of the solid food of Christ and Him crucified.  Whether at national or regional events or in the home parish, our great temptation is to entertain our kids to death rather than light their candles with the light of Christ and His Word.  We give them unrealistic expectations of what it means to live as a Christian in the world.  We dazzle them in the moment and leave them ill equipped to deal with the realities of a world in conflict with the faith and their own confusing lives as people in but not of the world.  We give them fun instead of Jesus and the fun we give them is but a pale imitation of the things they already have access to in the mall, the internet, and their smart phones.

A conversation revealed that a group of Lutheran youth had gone to a more orthodox Lutheran youth experience and left disappointed because it was like church, was not fun, and in fact was boring.  We did this to our youth and we do this to adults new to the faith and, when we dare to admit to ourselves, we confess that we too find worship and Christian life mostly boring and dull.  But that is the thing.  Life is filled with the routine, the ordinary, and the mundane.  Christian life is lived out in this same context.  Instead of killing the faith in our kids or poisoning the converts with the idea that faith is one emotional high after another, we need to be honest -- like Jesus!  We live our lives under the cross, in the world amid sin and as sinners whose hearts still long too much for that which is wrong and evil.  We constantly live out our faith within the cycle of sin and repentance that repairs, restores, and renews us from our failures before sin, temptation, and evil.  We bear a cross and not a ticket to excitement.  We will suffer and we will sacrifice in order to remain faithful but he who endures to the end WILL be saved.  We dare not grow so content with the world and its allure because our citizenship is in heaven and we long, like the groaning creation around us, for the new heavens and the new earth God has promised and prepared for those who love His appearing.

We have to stop trying to light matches and begin lighting candles with the Light of Christ that comes through the means of grace and, by the power of the Holy Spirit, transforms us into the people of God.  Our people are falling away, our new people are not staying, and our youth are running away because we have lied to them about what faith is and how Christian life is lived out.  This is a race but not to the finish line -- it is a race of endurance.  The slow and steady always wins.  To those planning worship, those preparing youth programs, and those who reach out to the unchurched, do not forget.  People are not matches but candles.
Posted by Pastor Peters at 6:00 AM