The name gets in the way of the mission. . . 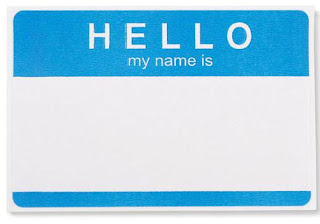 Sitting on the board of a local pastoral counseling center is usually about money to pay the bills but it became about the name -- Pastoral Counseling Center -- and how that name had gotten in the way of the mission and therefore a name change was needed to fulfill its mission more effectively.  And of course the word pastoral was the first thing ditched from the list of choices that ended up with a brand also used for a Honda hybrid vehicle.  I guess that cross association does not interfere like the word pastoral did.

Of course we all know about how Aid Association for LUTHERANS and LUTHERAN Brotherhood merged into Thrivent Financial for Lutherans.  And that did not last.  Now it is Thrivent Financial for ANYONE WITH MONEY.  Lutheran, it seemed, was interfering with Thrivent's core mission, conflicting with its core values, and preventing it from expanding its core base.  Dontcha just love those cool buzz words like core and values and such!

Then I read where Lutheran Social Services of South Central Pennsylvania recently rebranded itself as "Spiritrust" -- there was that pesky name Lutheran getting in the way of its mission and keeping it from fulfilling its purpose of thriving (oops, wrong organization).

Now to be truthful there are more than a handful of congregations that are officially Lutheran somewhere in their constitution or by-laws or affiliation but who have come to the same conclusion -- the name Lutheran interferes with our mission.  In my own District we have LakePointe Church and Rhythm City and New Tribe, etc...  No one would dare to mistake these cutting edge centers of missional activity with the dour, dull, dead Lutheran Churches who are providing the $$$ to pay their bills.

A friend wrote a mission document that had the radical thesis that Lutheran missions ought to result in Lutheran congregations.  He was roundly criticized as being parochial and out of step with modern sensibilities.  Everyone knows that bringing people to Jesus and connecting them with an altar and pulpit where the means of grace nurture their faith and lives are goals at odds with each other!  Lutheran is a word that impedes mission and connecting people with an altar and pulpit and font is a goal that conflicts with the overall goal.  We want them to love Jesus but we don't love them enough to put them into the context of the Word and Sacraments???

I think it is much, much more important to be truly Christian than to be Lutheran.

Au contraire, to be Lutheran is to be truly Christian.