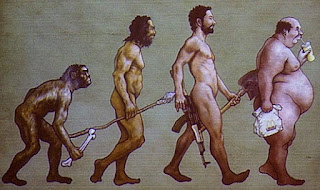 Nothing is more attractive or more false than the myth of progress. We all want to believe that with enough effort and after expending sufficient resources, we will make a better life, a better world.  We all want to believe that a better future is waiting for us to care enough, to work hard enough, and to be committed enough to make it all happen. Even the dreaded conservatives believe in this myth of progress -- they just believe it will happen best by a free marketplace inhabited by a free people instead of by government, committee, or experts.

The myth of progress is not only a problem in the realm of culture and society; it is a problem within the church.  It has gripped the Scriptures until Christians have come to believe that the Word of God does grow, evolve, and change and that this is its promise -- not its forever sameness.  We put the Bible through its paces to figure out who wrote it, what they meant when they wrote it, who the readers were who first read it, what they heard it say, and how we cannot trust what it says now.  The historical critical movement has virtually erased common confidence that Scripture is clear, that it speaks one message, and that its Word endures forever.  With the power of the Enlightenment and the disappearance of any teaching magisterium, Protestants have replaced the voice of God with their own individual conscience and reason.  So if we don't like what the Scriptures say, we either remodel the words themselves or we posit the radical thought that we never really heard it rightly or understood it correctly before.

The liturgical movement took the Divine Service as a starting point and not a means of grace.  What happens in worship is an evolving and changing reality that the Spirit is flourishing among us and the best thing we can do is to surrender our dogmatic certainties and get out of the way to let whatever happen.  Sunday morning became an experiment and people were surprised by what might happen so that worship attendance became an experience of curiosity rather than the invitation of certainty.  What we think, what we like, and what we find relevant became the all important gauges of propriety and success for the worship of the church.  Progress was the goal -- aesthetic progress toward some unknown spiritual event or progress in the practical terms of what works to pack them in.  Evangelicals judge everything by size and faithfulness can mean only one thing -- market success.  This is the progress that has swallowed up both liturgical theology and practice and evangelistic fervor.

The myth of progress presumes that a new idea is automatically better than the ideas of yesterday.  So creeds that once united the voices spanning centuries of time and miles of geography are replaced by local creeds invented for the moment.  Church music has fallen into the same tired rut of relevance and preference.  Gone are the hymns of old to which we once added our own voices and in their place are the throw away songs of the moment who fit what we feel and what we think that second.  In theological education books are printed that claim new insights and we gobble them up without thinking about the consequences of the fact that we might have gotten it wrong all those years.  History is only as long as our memory and so we define everything by what we can recall.

God's kingdom has gotten swallowed up in the myth of progress so that social advocacy and social justice presumes that the divine will is for us to fix what the Lord did not and to make the world a better place and leave things better than we found them.  Nevermind that this contradicts the word of Scripture which insists that the world is decaying, moving step by step to its destruction, and that the world will most certainly become less and less friendly (if it ever was) to the Gospel.  We have forgotten the blunt words of warning Jesus issued to those who would follow Him.  We no longer expect a cross but a long life, well live, filled with rich experiences, and great happiness.  We do not expect to suffer but have decided that suffering in all forms is wrong and that the goal of everything from medicine to marriage is to relieve suffering.

The myth of progress fits what we think but the only problem is that it conflicts with what the Lord has said and the honest reality of experience.  We are not becoming happier or better people and our world is not become safer and more just and God does not exist to make these things so.  But that is the fruits of the old Adam who continues to be deaf to the voice of God but who can hear loud and clear the voice of the devil.  We must not only fight the good fight of faith but battle the myth of progress if we would be faithful to Christ.  We are as god once was and what god is we shall become.  That is the myth of progress and only the cross can rescue us from its terrible and cursed lie.
Posted by Pastor Peters at 6:00 AM

The idea of classic liberalism that people are getting better through technological progress died in the trenches of WW1. It is still amazing how many people still believe in it.

What would happen if today's 'relevant' churches took a serious look at their own progress, or lack thereof. The tolerance of sin I have seen (and experienced) is only part of the problem. We are saved from the relevant mess this world takes for progress. The progress in the Christian's life is s progress toward death. Death is the door to the real world; the new heavens and earth we are promised. Too many who call themselves Christians today are focused on the false progress of gaining this world's goods, fame, and fortune.