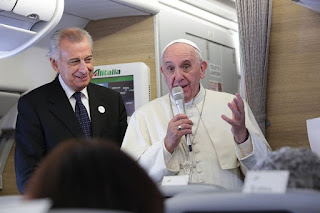 There is no shortage of stories of Pope Francis speaking off the cuff on all sorts of subjects.  He is quite a chatterbox, after all, and seems to enjoy the open microphone.  Some folks love this but many Christians (Roman Catholic and not) are uneasy about a Pope who presumes to speak on all sorts of topics to anyone who will listen.  It is certainly out of step with his predecessors whose remarks were much more scripted -- not to prevent spontaneity but because they knew the weight their words would carry.

On June 16, the Pope said that the great majority of sacramental marriages today are not valid, because couples do not enter into them with a proper understanding of permanence and commitment.  “We live in a culture of the provisional,” the Pope said in impromptu remarks June 16. After addressing the Diocese of Rome’s pastoral congress, he held a question-and-answer session.

You can read the whole story here. . .

One commentator suggested that unlike the mostly silent Pope Emeritas, if this one were to retire he might find it hard to keep his mouth shut.  Pope Benedict has indeed retired to a more contemplative life of study and prayer.  He has broken his silence only a handful of times, retracted a few things said as a Cardinal, but never contradicted Pope Francis or used his words to influence things under considering in Rome.  In most cases his words were support for the doctrine of the faith as  unchanging and steadfast.  I am sure that, looking back at Ratzinger's body of work, he must have opinions but he has kept them to himself.  Could a retired Pope Francis do this?

What is good for media is hardly ever good for the faith.  When the Church speaks to every issue, its words lose import and standing.  When the Church speaks casually, the world finds it hard to distinguish between formal and doctrinal teaching and the friendly banter of our social media.  When the Church appears to contradict itself or call into question settled matters, the world may rejoice at the idea of a church undertaking some housecleaning (aggiornamiento), but the end result is usually worse than confusion and often bitterness when the hoped for opened door remains closed.

Those who speak for us as leaders of the various communions have a heavy burden of distinguishing between the formal speech that upholds the faith and applies it and the great temptation to speak because there is an open mic and a camera rolling.  Not everything we say is of the same value.  I say that about this blog -- not all my opinions are weighty or my thoughts worthy.  But there is a great difference between what one person says and what it means for a leader of a church to speak on behalf of all the church.  Frankly, I wish Pope Francis would give this more consideration.  He talks too much in public to whomever will listen.  His words do not merely impact Roman Catholics but all Christians.

I remember getting a phone call from someone complaining about the actions of the ELCA CWA 2009 on sexuality.  After listening to the rant, I said to the man that my parish did not belong to the ELCA but was part of the LCMS and that we, though we had many faults, had not acted as the ELCA had done.  It was of little concern to this man to which jurisdiction we belonged, we were Lutheran and so we were also guilty in his mind.  Sure, we all know the Pope does not speak for every Christian but to the world the Pope speaks for most and they presume his words count for more than himself alone.  With such opportunity goes much responsibility.

When a Pope, or a politician, or even you and I speak about any topic "off the cuff," we open up a mirror to our state of mind and expose ourselves to approval, criticism, laughter, scorn, or perceived hypocrisy.. The "off the cuff" remark is usually a time in which our opinions surface above our much more desirable reasoned and measured thought process. Our "off the cuff" remarks usually get us into trouble because our listeners wonder if we are seriously reflecting our true and unvarnished views, or are we just being momentarily emotional and thoughtless. Even Martin Luther made "off the cuff" public comments...running his mouth too much, and riding roughshod over his otherwise brilliant intellectual discernment. Being rash in one's speech, as Donald Trump might privately admit, can bring both positive and negative responses....and being blunt is not always a virtue. Honesty and truth can be expressed in a choice of words that can inflame passions or elicit agreement, depending on the circumstances and tone as well. The Pope is an "off the cuff" speaker and unpredictable. As such, many wonder where he really stands on the issues.

I think the following article gives a fair insight into Pope Francis and his Off-the-cuff comments.
https://cruxnow.com/commentary/2016/07/02/pope-francis-goes-off-cuff-think-latin-america/