An honorable man and a fine churchman. . .

In the grand scheme of things it may not seem like the position of Secretary is a front line office of the Lutheran Church Missouri Synod.  In reality, it is one of the most demanding and most unsung offices of the church.  The Secretary of Synod must have a handle on many things.  He must have a good grasp of the constitution and by-laws of the LCMS.  He is the keeper of the corporate memory on how the constitution and bylaws got to where they are today.  He is often a representative of the Synod President (for example, as his representative to various boards).  He must work with the disparate groups of Synod who sometimes do not get along all that well (DPs and their CoP among others).  He must have a thorough familiarity with and mastery of the bylaws that deal with the particularly thorny issues of dispute resolution and ecclesiastical discipline.  He not only oversees these processes but is personally responsible for oversight of the reconcilers who work to bring parties together and render difficult decisions in times of dispute.  He cannot be a party man who is identified too closely with any movement or cause or his credibility as an independent and objective individual will suffer and his effectiveness with it.  He works more behind the scenes than in front of everything and everybody and must be content to let others be credited for what he does well and be blamed for what others do not do well.  He is one of the most responsible individuals in making sure that all the rules are followed, the deadlines met, and the nominations complete for every office in Synod from the President of Synod to the VPs to the members of the various boards and commissions (which is a giant duty in a convention year!).  His most critical assignment is as a voting member of the Commission on Constitutional Matters -- a sort of supreme court for the Synod in rendering opinions on what the constitution and bylaws mean and how they are applied among the more tedious responsibilities of trudging through constitutions, operating manuals, and the like (as if this were more fun than a barrel full of clerical collars).   I could go on about the manifold responsibilities of the Office of the Secretary of the Synod but I will leave you with enough to get an idea that there is much more to this office than writing minutes (which is pretty important). 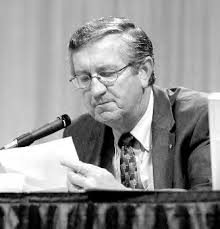 Since 1998, the Rev. Dr. Ray Hartwig has served as the Secretary of Synod.  Prior to his election as Synod secretary, Hartwig had served as president of the LCMS South Dakota District for 10 years and as a parish pastor in South Dakota prior to his election as District President.  He has served long, ably, and with great integrity in an office few of us count as important as it truly is.  Now he plans to retire back to Sioux Falls as soon as the transition is complete.  It will be very difficult for me to think of Synod without Ray Hartwig as Secretary.  No one is really indispensable but Ray Hartwig has come close and leaves some very large shoes to fill.  His wisdom, his gracious demeanor, his humility, his experience, and his mastery of the often arcane details of Synod's rules will be sorely missed no matter how wonderful his successor proves to be.

I cannot do much to reward Ray for his faithful and honorable service to the Church but I cannot let this moment pass without singing the praises of someone who has been content to be in the background but whose stewardship of this office has been exemplary.  Thank you.  Thanks to your family who has been your support and strength even as you have been theirs -- following you from South Dakota to St. Louis!  Thank you and God bless you for your selfless and noble service to the Lord, to the Church, and to those of us who belong to the LCMS.  Your faithfulness will long be remembered and a grateful church rejoices before the Lord for your leadership!
Posted by Pastor Peters at 6:00 AM

I agree. There are people serving the LCMS who are gifted at organization, competent in the resolution of problems, and focused on the need for operational efficiency. They do not allow petty squabbles to detract them. God's leaders need qualities which bring people together to see the larger picture....to be servants invested in the Great Commission. The LCMS is blessed to have the men you mentioned, as well as the women of the Synod who address the practical concerns of the church. We need to appreciate them more.