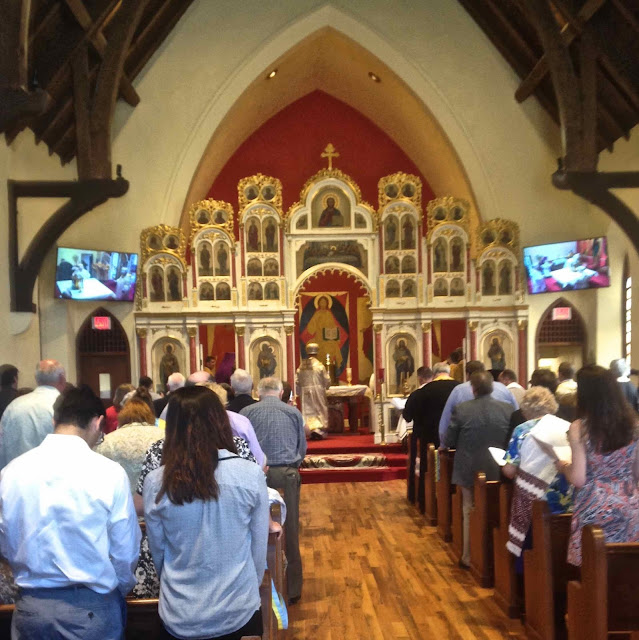 Now I thought one of the points of the iconostasis was to distance the people from altar until the doors were opened.  Look in the corners of the inconostasis in this picture.  Apparently that has been overcome.  TV monitors allow the people in this Byzantine Rite parish (I have no  idea of the actual jurisdiction) to see behind the iconostasis and behold what the priests are doing back there.  Screens are a bad idea -- more logical for those churches that use media in entertainment worship but completely incomprehensible for an Easter rite.  I have a great idea.  Do not use them.  Do not give into the dark side -- not evangelicals who are in love with every new technology and not Lutherans who wannabe evangelicals and not Roman Catholics who want to appear mainstream and not Byzantine Rite Christians who want to make things more accessible.
Posted by Pastor Peters at 6:00 AM

It was easy when there was no temptation to immerse ourselves in technology. When there is no temptation, life is easy. The hard thing is to mark the line over which we should not cross. Technology is not a sin, it is a thing (well, a LOT of things). Food is not a sin; it is also a lot of things, given by our Good Lord for our use and enjoyment. Like food, too much technology is not good for us. There are places in this world (though less and less, unfortunately) where having/eating food is inappropriate. There are times and places in this world where technology is inappropriate. Somehow, I doubt God will have jumbotrons in the Heavenly Jerusalem to make sure it's occupants get the message.

That picture was absolutely disgusting. The priests in that parish should put a stop to that STAT! For shame!

I agree with all of the above. There is a time and place for technology, and there are many inappropriate occasions to use video. But it seems that the train has already left the station. Many folks today can barely put down their smartphones and IPads long enough to see the real world around them. Everything is taped and "utube ready" instantly, emailed to friends, "selfies" dominate digital conversation. The churches around the world are all on board the technology train, and a future generation of people will have bent necks and upper cranial spine discomfort from looking down at their gadgets most of the day.

Holy Myrrh-Bearers Ukrainian Catholic Church, Swarthmore, PA, where I attended the Sunday Liturgy last Sunday. Happily, the screens were not in use (although, as I was later told, there may be an intention on the part of some to use them)

I think we can safely say that Rome has not improved on the Eastern Rite. However, Orthodox can do tacky things with electricity in church. I've seen it first hand. Whether it is going wild at the Great Doxology (Glory to Thee who hast shown us the light ...) at the All Night Vigil by going from candlelight only to turning on ALL the lights in the church simultaneously (in some places, you almost need sunglasses) to putting up a red neon sign on the iconostasis (I am not kidding) that flashes XB (for "Christos Voskres" (Christ is risen) ) during Eastertide ... tackiness knows no bounds.