Stained glass is a threat to America. . . 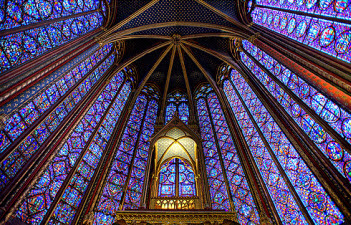 This just in. . . The EPA is on the verge of shutting down American production of the art glass used in stained glass.  Glass is still available from European and other sources but it will come at a greatly increased cost both of production and shipping.  Some firms -- even the largest stained glass production firm in the US, are closing because the profit margins are slim, the demand fluctuates, and the cost of compliance is too great.  So if you are a church considering stained glass, be prepared to raise more funds than you expected. . . and if you have an order in place, the cost may escalate due to the change in rules.


The EPA crackdown on glass manufacturing regulations stems from a February investigation into high levels of cadmium — a heavy metal that can cause lung cancer — and other toxic heavy metals found in the air around two glass factories in Portland, Ore.  But those are also the metals that add color to stained glass, which is delivered in squares and then melted and shaped by artists and workers.

Since 2007, EPA regulations have required that furnaces producing glass 24 hours a day, seven days a week must be equipped with industrial filters that prevent up to 99 percent of pollutants from escaping smokestacks. But small-batch furnaces, like those in specialty stained glass shops, were allowed to circumvent those rules.  Now the EPA may tighten those regulations, requiring all glass manufacturers that make more than 50 tons of glass a year with toxic chemicals to filter their exhaust.


"We haven't seen the full reverberations yet because it's so new, but it will definitely have an effect," said David Jedson of the Stained Glass Association of America. "It's not just the initial investment of emissions controls, which we fully support, but part of the problem is these companies haven't had any time to plan.  "It happened so quickly, and they've had trouble responding."

The EPA said the new rules are not final.  "EPA is continuing its review of art glass plants across the country," said spokesman Nick Conger in an email to the Tampa Bay Times.  Those changes factored into companies like Spectrum Glass, one of the biggest suppliers in the stained glass industry, closing shop last month after 40 years. The Washington manufacturer provided ready-to-shape glass to companies nationwide, but said sales have been weak since the recession, so it couldn't afford the new pollution controls required by the EPA. The company will cease operations by the end of July.
The repercussions of Spectrum's decision are being felt in Florida. Ken Casola said he typically buys colored glass from Spectrum for his Casola Stained Glass Studio in Naples. But he said the company's closing, and an anticipated increase in cost for domestic glass, could force him to import more glass from out of the country at a higher price.

"The whole industry is going to be affected by it; it's going to be a problem," said Casola who has been in the glass business since 1985. "I had been reading about it, but I didn't think it was really going to happen."

These were expensive to make because gold was used to produce the color. Glass bottle Manufacturers