In Bethlehem workers are in the midst of a $15-million effort to repair, conserve, restore, and rebuild the Church of the Nativity.  Revered as the site of Jesus’ birth, this Church has had a history of conflicts between the custodians of the land and facility but finally cooperative work was begun in 2013 to undo what soot, water damage, and wear have done to this historic sanctuary.

It will be several more years before this is completed, pilgrims who visit next Easter will have an extraordinary preview of the unbelievable restoration work that has been done so far to the roof, walls and 900-year-old mosaics.

The site has been a magnet for pilgrims and tourists for nearly 1,700 years, people who have desired to be in the place where Tradition holds that Mary gave birth to Jesus (no room in the inn).  But the centuries of wear and tear have left Christians with little of what the building and its treasures of art were really like.  A catastrophic history of rotting roof and leaky windows let in torrents of water, causing extensive damage to its mosaics, murals and infrastructure. Nearly 2,000 years of candle soot had darkened the walls to the point where the mosaics were nearly invisible. When the Italian restorative specialists began to clean the blackened mosaics, the result was a great surprise of color and light, like night and day.   The priests and Palestinian officials had feared parts of the church were in danger of collapsing and only this threat seemed to encourage all parties to come together to preserve this important Church.

Originally built in 339 AD by Emperor Constantine, the Church of the Nativity was almost destroyed by the Samaritans 200 years later. The current church was built on the same site.  Christian art is the theology we see with the eye and this Church has provided a rich new viewpoint into the faith and life of those who came before us.  Unfortunately, only 20% of the church’s mosaics survive yet those which do remain are magnificent monuments both to artistry and the Christian faith.

Here are some more pictures. 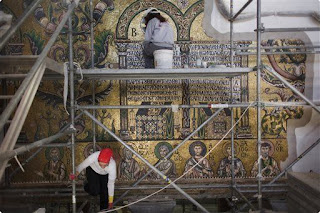 Thanks for the pictures! When I was in Israel in 2014, I had hoped to get to Bethlehem. But, as you know, its in the West Bank and was not a good idea that day to be visiting there. But its on my Bucket List for a future visit. But I enjoyed hear about the renovations.
--- Mabel

Such incredible pictures... There's a lot of beautiful places worth to see.
I think repairing of this object is very important not only as christian shrine, but as a culture important object.

By the way, repairing and cleaning is performed by www.kuurapalvelut.fi in Europe. Everyone who need it, can hire professionals for cleaning house.