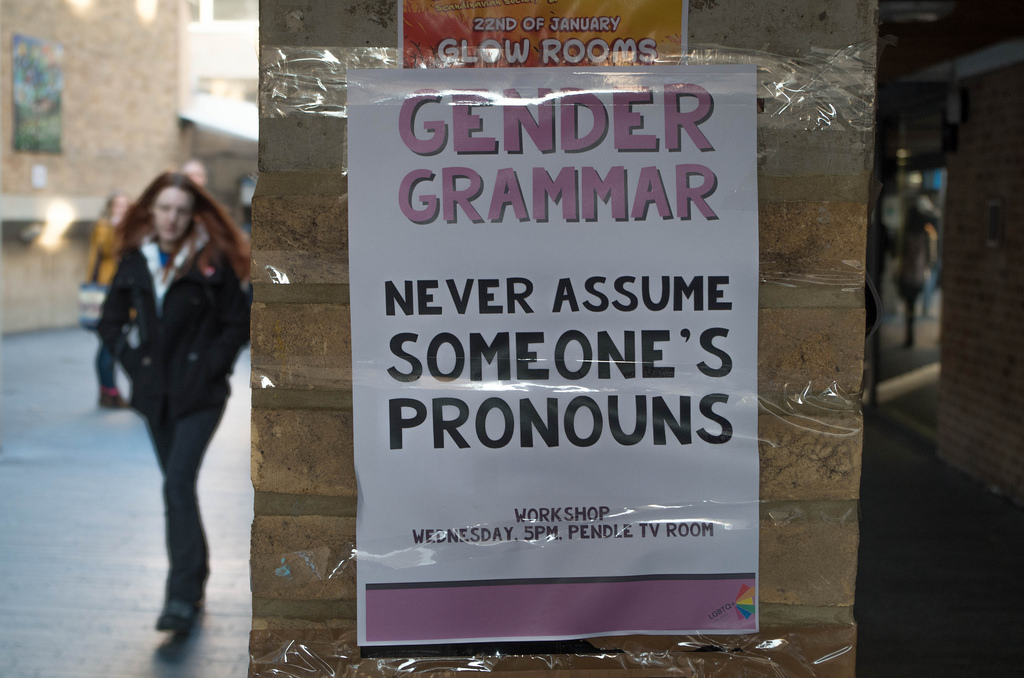 On the TV program Jazz there is the story of a family that made a choice to raise their son as a girl, providing hormone therapy so that the child would not enter puberty as a male, and the series is now working through the final "bottom" surgery to finish creating what nature did not.  In one scene the main character accompanies a doctor's visit of another boy choosing to identified as a girl (but one who had gone through male puberty before beginning the transition).  In the doctor's office the physician mistakenly called the boy who identifies as a girl he.  The Jazz character kept after the other youth saying over and over again "Did she just misgender you?"

Of course this is so-called reality TV and what would reality TV be without drama, right?  But that is the point.  This is not just reality TV.  There are schools where children are being punished or corrected or sent to the proverbial principal's office over the use of the wrong pronoun or for using the given name of a boy or girl who is now choosing to be identified differently.  Misgendering is not merely something invented for TV.  It is real.  Those who dare to call someone a boy or girl because that is the shape of the body or because that is the legal name of the individual are in big trouble, literally.

Sadly, we live in an age in which feelings are so pivotal to our sense of what is real and what is not, we have creatively invented ways to offend or be offended.  How are we to find out way out of a culture so wedded to invented truth?  How will we solve the riddle of "gender" if the body is left out of the equation?  The point is that we have not only normalized a disorder and created a medical treatment for a psychological issue, we have created a conundrum for polite society.  With our already thin skins and penchant for offense, we have now invented another way to offend and another way to take offense for something that is not a diss or an offense at all but a attempt to find our way through what is a confusing mess.

I will admit that I have misgendered babies whose clothing and appearance did not immediately scream out boy or girl.  I have repeatedly misgendered people whose names have no real identifying gender (from traditional names like Taylor to the fanciful mess of letters people inflict upon modern day children).  But if you wrongly call someone who identifies as one gender but has the body of another, is that really an offense?  Let me step out on a limb here.  No.  It is not.  There is no offense.  If we wonder why we live in such a divided and prejudiced world, it might behoove us to consider stop inventing reasons to take offense when none was intended.

I live in the South, notorious for being less than charitable toward Roman Catholics.  Only about 8 or 9 pastors in a city of 150K wear a clerical collar.  Talk about strange looks and angry reactions!  I have even had people ask if I was in an accident since I seem to be wearing a neck brace.  I have been cursed at, spit at, and been fair game for everyone who has no use for clergy except to ask for money.  It goes with the territory.  I can waste my time being offended or I can get on with it.  That is true about a lot of things in life we have made into offenses.
Posted by Pastor Peters at 6:00 AM