Luther’s reform was ‘against the Holy Spirit’  by Gerhard L. Müller 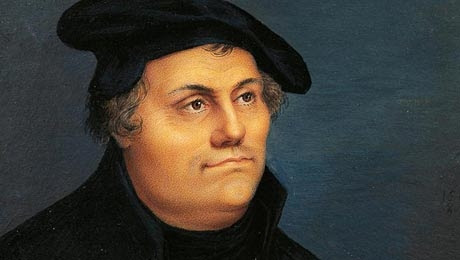 It is not realistic to argue that [Luther’s] intention was only to fight against abuses of indulgences or the sins of the Renaissance Church. Abuses and evil actions have always existed in the Church, not only during the Renaissance, and they still exist today. We are the holy Church because of the God’s grace and the Sacraments, but all the men of the Church are sinners, they all need forgiveness, contrition, and repentance.

This distinction is very important. And in the book written by Luther in 1520, “De captivitate Babylonica ecclesiae,” it is absolutely clear that Luther has left behind all of the principles of the Catholic Faith, Sacred Scripture, the Apostolic Tradition, the magisterium of the Pope and the Councils, and of the episcopate. In this sense, he upended the concept of the homogeneous development of Christian doctrine as explained in the Middle Ages, even denying that a sacrament is an efficacious sign of the grace contained therein. He replaced this objective efficacy of the sacraments with a subjective faith. Here, Luther abolished five sacraments, and he also denied the Eucharist: the sacrificial character of the sacrament of the Eucharist, and the real conversion of the substance of bread and wine into the substance of the Body and Blood of Jesus Christ. Furthermore, he called the sacrament of episcopal ordination, the sacrament of Orders, an invention of the Pope — whom he called the Antichrist — and not part of the Church of Jesus Christ. Instead, we say that the sacramental hierarchy, in communion with the successor of Peter, is an essential element of the Catholic Church, and not only a principle of a human organization.

That is why we cannot accept Luther’s reform being called a reform of the Church in a Catholic sense. Catholic reform is a renewal of faith lived in grace, in the renewal of customs, of ethics, a spiritual and moral renewal of Christians; not a new foundation, not a new Church.

It is therefore unacceptable to assert that Luther’s reform “was an event of the Holy Spirit.” On the contrary, it was against the Holy Spirit. Because the Holy Spirit helps the Church to maintain her continuity through the Church’s magisterium, above all in the service of the Petrine ministry: on Peter has Jesus founded His Church (Mt 16:18), which is “the Church of the living God, the pillar and bulwark of the truth” (1 Tim 3:15). The Holy Spirit does not contradict Himself.

We hear so many voices speaking too enthusiastically about Luther, [Pope Francis?] not knowing exactly his theology, his polemics and the disastrous effect of this movement which destroyed the unity of millions of Christians with the Catholic Church. We cannot evaluate positively his good will, the lucid explanation of the shared mysteries of faith but not his statements against the Catholic Faith, especially with regard to the sacraments and hierarchical-apostolic structure of the Church.

Nor is it correct to assert that Luther initially had good intentions, meaning by this that it was the rigid attitude of the Church that pushed him down the wrong road. This is not true: Luther was intent on fighting against the selling of indulgences, but the goal was not indulgences as such, but as an element of the Sacrament of Penance.

Nor is it true that the Church refused to dialogue: Luther first had a dispute with John Eck; then the Pope sent Cardinal Gaetano as a liaison to talk to him. We can discuss the methods, but when it comes to the substance of the doctrine, it must be stated that the authority of the Church did not make mistakes. Otherwise, one must argue that, for a thousand years, the Church has taught errors regarding the faith, when we know — and this is an essential element of doctrine — that the Church can not err in the transmission of salvation in the sacraments.

One should not confuse personal mistakes and the sins of people in the Church with errors in doctrine and the sacraments. Those who do this believe that the Church is only an organization comprised of men and deny the principle that Jesus himself founded His Church and protects her in the transmission of the faith and grace in the sacraments through the Holy Spirit. His Church is not a merely human organization: it is the body of Christ, where the infallibility of the Council and the Pope exists in precisely described ways. All of the councils speak of the infallibility of the Magisterium, in setting forth the Catholic faith. Amid today’s confusion, in many people this reality has been overturned: they believe the Pope is infallible when he speaks privately, but then when the Popes throughout history have set forth the Catholic faith, they say it is fallible.


Of course, 500 years have passed. It’s no longer the time for polemics but for seeking reconciliation: but not at the expense of truth. One should not create confusion. While on the one hand, we must be able to grasp the effectiveness of the Holy Spirit in these other non-Catholic Christians who have good will, and who have not personally committed this sin of separation from the Church, on the other we cannot change history, and what happened 500 years ago. It’s one thing to want to have good relations with non-Catholic Christians today, in order to bring us closer to a full communion with the Catholic hierarchy and with the acceptance of the Apostolic Tradition according to Catholic doctrine. It’s quite another thing to misunderstand or falsify what happened 500 years ago and the disastrous effect it had. An effect contrary to the will of God: “… that they may all be one; even as thou, Father, art in me, and I in thee, that they also may be in us, so that the world may believe that thou has sent me” (Jn 17:21).
Posted by Pastor Peters at 6:00 AM

Does anyone know of a Romish website with as many Lutheran columns as the Romish columns of this Lutheran website?

This article is quite dishonest and misleading. The author attempts to offer a rationale in defense of the history and traditions of the Roman Catholic Church, however, no defense can be made for the blatant heresies and corruptions which led to the Reformation. And before the appearance of Luther on the world stage, how many martyrs were burned at the stake by the RCC for daring to oppose the tyranny of the Popes and their false teachings. The Reformation was a necessary purging, and indeed, it was the work of the Holy Spirit acting through Luther and others to cleanse and renew the church, which was no longer salt and light, and unworthy in too many ways to list.

This is a very interesting and controversial discussion going on in the Roman catholic church. There is definitely a split and you can find Catholics of every stripe who support the Reformation and those who are the "Fundamentalists" per Cardinal Muller.

We just had a wonderful REFORMATION service yesterday in the local cathedral.
It could be almost considered a love in with long lost relatives who have found each other and are now reconciled.

There is an obvious split of theological opinions in the Roman Church, which is a bit of irony considering they think of themselves as the one holy catholic church. Methinks it is not one big happy family.

Cliff, there has been a long standing split within the Protestant denominations as well as within Catholicism. Also, there are deep fractures within each denomination, with progressives pitted against members who are traditionally more orthodox. What gets lost in the conflict is the idea that our differences have moved us further away from simply reading the Bible, meditating on the plain Gospel truths and the words of Our Lord as our focal point. As a Lutheran (LCMS), I believe that the Bible is followed more closely than in the Roman Catholic Church, where Papal authority has allowed many unBiblical teachings to prevail. Achieving unity is not possible. Much false theology is currently being promoted in American churches today.

Bravo, Cardinal! Well said. Luther and his heresy be damned.

Mr. Vehse, your know Father Peters is a solid confessional Lutheran. He is simply sharing the RC viewpoints on Luther and other points that the RC make that are worthwhile for us to note. Please relax and celebrate the 500th.

In this quincentennial time, it is more profitable to read what Lutherans write about the spark that ignited the Reformation flames:

"Luther’s 95 theses are not themselves entirely Lutheran, after all. They were close, but he still hadn’t rejected the idea that there is a middle stage in the afterlife known as purgatory. He would reject this later, of course. But we can’t quite call Luther 'Lutheran' at this time. Instead, this set of 95 Theses sparked the Reformation of the Church, because they challenged the authority of the pope. Specifically, they challenged whether the pope had authority to free Christians from purgatory in the afterlife.

"Some of the main issues that were developing at this time for Luther began to take shape more rapidly in the years to follow. One of these issues was the teaching of free will. In a set of theses delivered in Heidelberg in 1518, the year after the 95 Theses, Luther attacked the teaching that natural man has a free will to choose God. This is something that is still taught today by the Roman Catholic Church as well as other protestant denominations such as the Evangelical Free. Luther outright rejected this on the basis of 1 Corinthians 2:14 and Romans 9:16. In one of his theses presented at Heidelberg he wrote: 'Free will after the fall into sin exists in name only; and as long as one does what is in him, one sins mortally.'

"This, along with other parts of his 95 Theses, was listed by Pope Leo X in his papal bull condemning Luther as a heretic. This bull was written on June 15, 1520."

Excerpted from "What’s So Special About the Reformation? Introduction" by Rev. Andrew Preus.