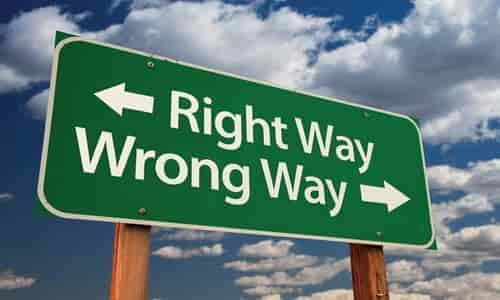 For some time, corporations have taken the lead in deciding what is moral and what is not.  When some CEOs decided to take a moral stand and resign from Trump's business advisory group, it was heralded by many as a conscience for the corporate world.  In reality, it cost those CEOs little to resign.  It has not cost the corporations much to shy away from states who resisted the GLBTQ agenda or to condemn those who want to close the borders down a bit.  It has cost them little to take their moral stands and it has allowed them to ride the roller coaster of political correctness all the way to the bank.

I am leery (well, really I am Larry) of corporations deciding what is moral and what is not.  The marketplace is a great thing but it is a remarkably unreliable when it comes to deciding what is right and what is wrong.  Corporate America is a great follower but not a great leader when it comes to acting with a conscience.  This should come as little surprise.  The business of business is business, or, more accurately, making money.  A moral stance which might require them to choose between making and losing money is one you seldom see.  Oh, sure, some corporations may take stands that reduce their profits but they cannot afford to exchange profits for morality.  It is not their business.  We should not expect them to be moral leaders.  No institutions are effective or reliable moral leaders.  Consciences were placed by God into people and not into business structures.

It is actually quite fearful to think that the moral conscience of America has taken up residence in businesses -- not in churches or even schools but in businesses?!?  Businesses are followers and not moral leaders.  They adapt to the changing tastes and desires of Americans but they are seldom more than followers when it comes to judging those tastes and desires.  It is foolish to think otherwise.  Morality lives in people and not in inanimate structures or processes.

So count me as suspicious of a cause when business gets around to deciding to take a stand on something.  It is not that I think little of those who are in it for profit.  It is that too often that that which is right is a roadblock to that which makes money.  Individuals have a hard enough time trying to listen to truth over the roar of the crowd.  So while it may seem courageous for CEOs and their Boards of Directors to take a stand, it is really rather easy.  We need to listen less to those who have decided that their idea of morality will not cost them anything and we need to struggle more with the choices before us and listen more to the voice of God's Word.  When this happens we will find that what is moral is seldom popular and the cause of truth is costly both to the pocketbook and to pride.
Posted by Pastor Peters at 6:00 AM

In the matter of a business following the moral conscience of its CEO or entrepreneur, it is a double edged sword, and depends on the side of the moral issue you agree with. For example, Christian owned franchises and small operations take a stand and refuse to photograph a gay wedding or bake a wedding cake for a homosexual couple. The result is condemnation and legal action against them, as well as a boycott and public scorn as bigots. A commercial business advertises on TV, showing rainbow flags in abundance, and projecting what appears to be homosexual character actors in the commercial. Nothing will happen to them because Christians usually will not take action against them. In my personal view, I will boycott a business that blatantly offends my faith. I can usually find another place to purchase what they sell, a competitior who is at least neutral and does not actively promote the gay agenda.

Chick-fil-A got it right and, happily, they were rewarded by a surge of business. Groupthink and indoctrination is now the norm in society that elevates political correctness. It all begins in the public schools where there is zero tolerance for the God of Christianity. We wouldn't want to impose our morality on someone else, especially if they don't happen to share in our understanding of the truth. We must be sensitive to those who are unfortunately confused about their gender identity. Now there is socially responsible investing and impact investing. But corporations, including the NFL, are held hostage by social crusaders that are out to correct every perceived ill in society and who see racial discrimination by American police and intolerance of sexual expression by prudish Christians and nefarious intentions by those rascally Republicans under every rock. America and the West are in a death spiral and the devil is loving it.