Popular piety slow to catch up to the university. . . 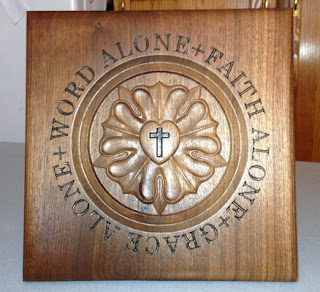 It is at one and the same time a good thing and a bad thing that there is distance between academia and the pew.  Change in the faith should be slow and things often move at a frenzied pace among those who treat the faith like an academic discipline.  It is a good thing that the people in the pews and their faithful piety is like an anchor dragging down the speed of heresy and apostasy.  When the Reformation moved inexplicably toward Calvin and the reformed position on the sacraments, the people in the pew still heard the consecration bells, bowed at the elevation, received Holy Communion with a houseling cloth under their chins, and sang the old chorales with their explicit and orthodox faith.  So when a Lutheran pastor fresh out of seminary comes along with the some unpronounceable new theology, it is good when the people in the pew hold onto their catechisms and hymnals.

On the other hand, there are times when popular piety, having come under the influence of non-Lutheran preachers, teachers, writers, and hymns, needs the university and seminary to restore the faith.  I cannot count, for example, the number of Lutherans who name the current popular contemporary Christian song or an old gospel standby ("In the Garden") as their favorite hymn and who taut the best selling mega church authors or internet sensations as their favorite writers.  So when a Lutheran pastor fresh out of seminary comes along with catechism and hymnal in hand, it brings a needed restoration to the folks in the pews.

Popular piety and academia can sometimes appear to be at odds but this tension is not a bad one.  Somebody needs to explain to the university types who have fallen in love with the latest source hypothesis theory or church growth guru that what the people seek and need is the faithful preaching and teaching of the Word of the Lord, the catechism, and the hymnal.  Somebody needs to explain to the people in the pew why Mr. Osteen or Mr. Jakes are not faithful teachers and why the beating bass of the latest and greatest worship song and its diva's voice are not the same as the creed, confession, and Reformation chorale.  If it all works well, God has a rudder through which the great ark of the Church has her course righted and is steered toward the truth that does not change.

We saw in the Synod what happened when a seminary got way ahead of the folks in the pew.  I was in the midst of pre-sem college and choosing a seminary when the battle Missouri was taking casualties.  My youthful instinct was to be a rebel but my wise father reminded me that my head and the church were not headed on the same path, that it was not a movement with deep support in the pews.  It was a good thing that the folks in the pews were slow to embrace the wave of modernity that had splashed over the sem.  That does not mean that one side was purely righteous and the other demonic but that one cause was faithful and one was not (as we can see by the relative ease by which Missouri's exiles embraced the ELCA and its course away from historic Lutheranism).

Now we are in another time.  Lutherans have fallen under the heavy influence of evangelicalism and the church growth movement.  We have found it too easy to separate style from substance and found that diversity of catechesis and worship have costs and consequences.  The church now needs faithful voices and pastoral leadership to remind us of God's Word and Luther's doctrine.  I am ever so thankful that my alma mater has stepped up to the plate and produces pastors for the church who will help us find our anchor again in God's Word and our confidence in the catechism and our voices to sing the faith the great chorale's confess.
Posted by Pastor Peters at 6:00 AM

Joel Osteen lacks any theological discernment. He is only a high
school graduate. He has no college diploma or seminary degree. He
proclaims "The Health and Wealth Gospel" It says that if you have
enough faith in God, then God will make healthy and rich. Throw in
the power of positive thinking and you have a scam artist posing as
a Christian preacher.

For how many decades did the LCMS wrestle with theological liberalism prior to the Seminex walkout? Should we expect the influence of evangelicalism and the church growth movement to continue to rot congregations within the LCMS for another 20 years. What will cause LCMS congregations everywhere to see popular Evangelical small group authors and preachers for the frauds that they are?

Pastor Peters wrote: "So when a Lutheran pastor fresh out of seminary comes along with catechism and hymnal in hand, it brings a needed restoration to the folks in the pews."

How can this be done without the congregation tarring and feathering the pastor to CRM status?

What will it take for more traditional, authentic, confessional Lutheranism to become cool again? What about fellowship? Lutherans are extremely weak at fellowship. Can Lutheranism be restored in a congregation while encouraging fellowship?

Fisk and Rosebrough are geniuses. LCMS church buildings should be filling up to overcapacity every Sunday morning because of them, but they are not. I don't get it.

It appears the Southern Baptists are quietly leaving for the non-denominational mega-churches:


Unlike the LCMS, there is no hope for "restoration" for the Baptists. Restoration to what? Hymnals? Mega-church evangelicalism *is* Baptist theology. Just ask Andy Stanley. His father Charles would reluctantly concur.