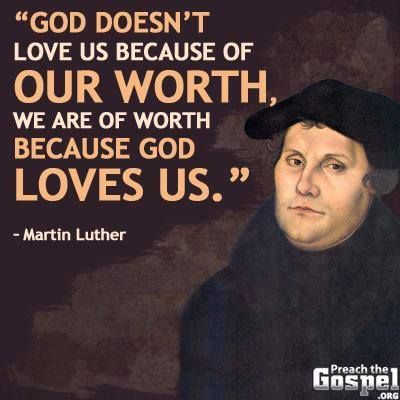 Philip Cary wrote in First Things for the November issue an article entitled Luther at 500.  In it he explains the challenge of Luther and the Reformation to both Protestants (which he considers the greater challenge) and to Roman Catholics.  There is enough Luther for all labels but Cary clearly sees the Catholic Luther -- not the one rebelling against sacramental Christianity but the one who sees everything through this sacramental lens, even justification by faith itself.  It is a great read and I urge you to go for it.

In it Cary speaks bluntly about Luther and the Word of God.  Cary insists that everything hinges upon the Word and not the Word in some theoretical sense but the Word heard in the ear.  Faith comes by hearing, said St. Paul to the Romans, and Luther was listening.  According to Cary everything depends upon God being true to His Word and the whole perspective of faith is holding onto and holding God to His promises.

In sacramental terms it is simple.  It does not matter what you see in the water or feel or think.  The baptism lies in the promise Christ has placed in that water.  To refuse or to discount this promise is nothing less than calling God a liar.  Strong words.  Our confidence before God is likewise placed in His Word.  God says we are clothed with Christ's righteousness.  Our unity with Christ is not the fruit of our yearning or our decision or even our desire but the blessed fruit of Christ's promise placed upon us in that baptismal water and faith flows from that baptismal encounter.  The Holy Spirit is at work.  We decide nothing of consequence and everything rests upon Christ alone.

All that we struggle with is, in itself, unbelief.  Of course, faith generates good feelings and produces good works and directs our heart to love the voice of God (in the Law) but none of this provides any foundation solid enough for us to trust our salvation.  So instead of asking if we are saved and having to search the heart for desire or the mind for a choice, we answer with Luther, "Yes, I am baptized."

When it comes to the sacramental system of Rome, Luther's problem was not that he did not believed in it but he believed it too deeply.  He took the words and promises of Christ at face value.  So the Sacraments must have Christ's promise attached to the element or they have nothing to hold onto.  It does not mean they are not godly or beneficial.  It means that the sacraments with the promise are the chief focus of the faith.  Christ alone.  That is key.  The Gospel is THE sacrament and it works in the external means of grace to deliver what it promises.  The job of the preacher is not to dispense wisdom or to serve as the conscience promoting morality but rather to give the people Christ.

Cary's point in all of this is that this is not a simple challenge to pope or council but to all of Christianity.  Rome may be less challenged by this than Protestantism which has effectively tamed the Word, run it through the sieve of reason, and turned faith into assent to certain propositions (or a personal decision).  In effect, the result is that Christ is not alone and distance is created between Christ and the Gospel, between the Gospel and the means of grace, and between the promise and faith.  In the end we are left with a good question.  Are we Christians because we have made a choice to believe or because we have had a religious experience of God or we have comprehended God, His works and His ways. . . OR because Christ says we are in our baptism.  Clearly there is enough here to make all a little uncomfortable with the Luther we love to remake in our own image.  Cary may not be right on every count but he has Luther better than many, dare I say most, Lutherans.

As I sit down with folks in the South, a region permeated by decision theology, entertainment worship, and at least the idea of Biblical authority, I find clear application of Cary's words.  How many folks (including Lutherans) paint a picture of Luther which looks remarkable like their own biases?  One of the most profound is the fact that we take the Word of God literally except those parts our reason insists cannot be literal.  Strangely, those things that suffer most under such a lens are the very things that give us the most comfort and hope -- the sacraments (promises attached to means or should I say the Gospel attached to means or might I say Christ coming through means).  Perhaps the worst culprits in all of this are the largest Lutheran church -- those who used to be Lutheran and now belong to some form of Protestantism.  They more than most do not want to hear anything of baptismal water or bread and wine or even the Word that is more than water, more than bread and grape juice, and more than words (to be processed like any other word).  This group more than most is offended by a Luther who finds "I am baptized" more profound than "I am saved" and who can dismiss Transubstantiation as an unnecessary explanation but not a big problem.  Yup, when the real Luther stands up, there is plenty of discomfort all around.
Posted by Pastor Peters at 6:00 AM