Would a booth boost confessions? 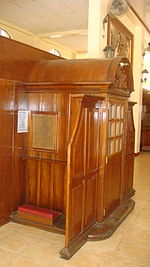 In Luther's day the Confessional Booth was unknown.  It was not in common use until the end of the 16th century and was something of an innovation.  Before then the penitent confessed to the priest wherever the priest was, though the absolution often took place at the altar.  Some priests used a stool and the penitent knelt before the priest to make confession.  I am not at all sure where the booth idea came from.  Someone once suggested that it came from Lutherans.  While I cannot say this is not true, it would surprise me.

For nearly 400 years the confessional was a staple of Roman Catholic architecture.  Sometimes it was a simple wooden box and other times a rather elaborate piece of furniture.  It enabled the priest to be hidden behind a screen or drape while typically the penitent knelt in an open booth, seen by others but whose confession was in secret.  After Vatican II, this was often replaced by a reconciliation room in which penitent faced the priest.  Among some, the confessional booth is undergoing a revival.  Some have complained that the confessional booth was used by some priests as a cover for sexual abuse.  I am sure that this may have happened by disreputable and despicable priests but find it hard to believe that it was common.  In any case, the reconciliation room does not seem to have encouraged private confession among Roman Catholic.

The strange thing is that many Lutherans have said to me that they would prefer the confessional booth to face to face confession.  If they were going to get up the nerve to make confession before the pastor, the relative anonymity of a booth would encourage them.  It is, in their view, easier to confess sensitive things without having to look into the face of the father confessor.  I find this most interesting.  It seems that anonymity remains one of the conditions many would place upon restoring the ancient practice of private confession (whether Roman or Lutheran).  While I certainly understand it, it is rather foolish to think that the ear hearing the individual confession of the people of the congregation would somehow not recognize who was speaking.  I can recognize most of my folks when they call on the phone and do not need to have them tell me who they are.  I expect many pastors who have been there in the same parish a while have developed the same familiarity.  Yet, the reality is that some would prefer not to face their pastors when make confession and this might be holding some of them back from initiating their first confession.

Some pastors would insist that anonymity deprives the pastor of his ability to provide faithful pastoral care to the penitent and give Biblical counsel to those who find themselves repeatedly in the same sins (don't we all?).  It would, in their view, work against the whole purpose of confession and absolution.  I expect that most folks I have spoken with would trade some of the familiarity for anonymity and would be willing to forego the counsel in order to be able to get something off their chest without having to look their pastor in the eye.  It would seem that they have come for the absolution and not to be counseled about their favorite sins.

In any case, I doubt that the confessional booth will find many friends among Lutherans -- even though some have suggested it just might help to restore a practice that, while it never disappeared among Lutherans, has certainly been in decline.  It may surprise some Lutherans that it was once a practice so popular that concern for the pastor advised him to sit down because of the extraordinary burden of so many penitents.  That said, perhaps the people are onto something.  If they would avail themselves of this rich gift and treasure, then perhaps a booth would not be out of line even for Lutherans.  I will wait and see what happens. . . as I expect some of you will. . . who wish the whole idea of individual confession and absolution would simply just go away for good.

That said, some Lutherans and probably not a few Roman Catholics who find the whole thing distasteful and unnecessary seem to delight in making full public confessions on Facebook and other social media.  In some cases, the confessional might be the last place where sins are admitted rather than the first.  What a strange time in which we live.  The folks who find it hard to confess anything to the pastor, tell the whole world in detail what they have thought, said, and done.  And yet they do so without the prospect of any real absolution at all.  Could it be that the real problem with confession has nothing to do with venue and everything to do with the fact that we don't think our sins are bad enough to be wrong but bad enough to boast about to our nine thousand closest friends on Facebook. What do you think of this idea? Annually, semiannually, quarterly a pastor from a regional congregation visits to hear individuals make their private confession of sins. It solves the issue of familiarity and yet allows for face-to-face pastoral care and counseling. The biggest obstacle to private confession with one’s own pastor is that it can conceivably change the dynamic of the relationship and make the confessor feel selfconcious. But, confessing to a pastor who will not be in the picture might make the difference and allow the confessor to open up enough to reveal their sins and receive absolution. It just seems so hard to bear your soul to someone you want to think highly of you even though you have been forgiven. Also, I am supremely confident that my sins have been forgiven in the Divine Service and weigh private confession in view of that.

Your last paragraph hi the nail smackdab on the head. As always, a great post.

Smartphone rechargers underneath the pews.

As a Lutheran pastor for 45 years, and though I have not had time to think deeply about Anonymous’ suggestion for neighboring clergy to hear confessions, I think it is an idea well worth considering. On the one hand I know that while there is something very honest about revealing oneself to one’s pastor, it can be a frightful experience (please, let no one poo-poo this fear!). On the other, it might just facilitate the beginning of a confessional process if one knew one could confess fairly anonymously. In time, perhaps, confession might become more possible, even with one’s pastor. I don’t know. From my own experience with making my confession - yes, as a pastor - I think I also would prefer a confessional booth to face-to-face confession, although my confessions have always been face-to-face thus far.

I was just talking about this subject with a brother pastor yesterday. I think there are people in my parish who would take the leap of beginning to use private confession if there were a chance of using it with greater anonymity (including a visiting pastor / booth).

Why would a pastor carrying out any duty of his divine call change the dynamic of the relationship between shepherd and the sheep of the flock? Who, in this relationship, is responsible for seeing that it is maintained?